The Kaminarimon (雷門) with Lights 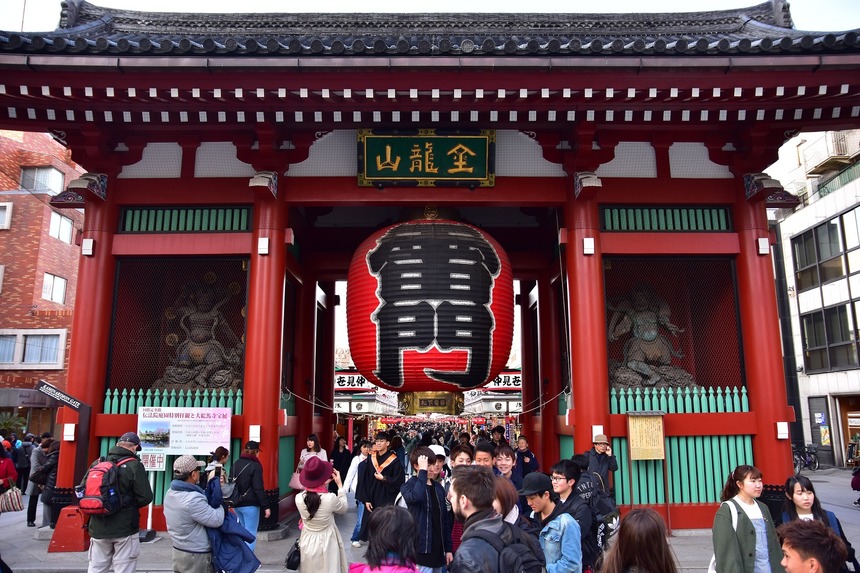 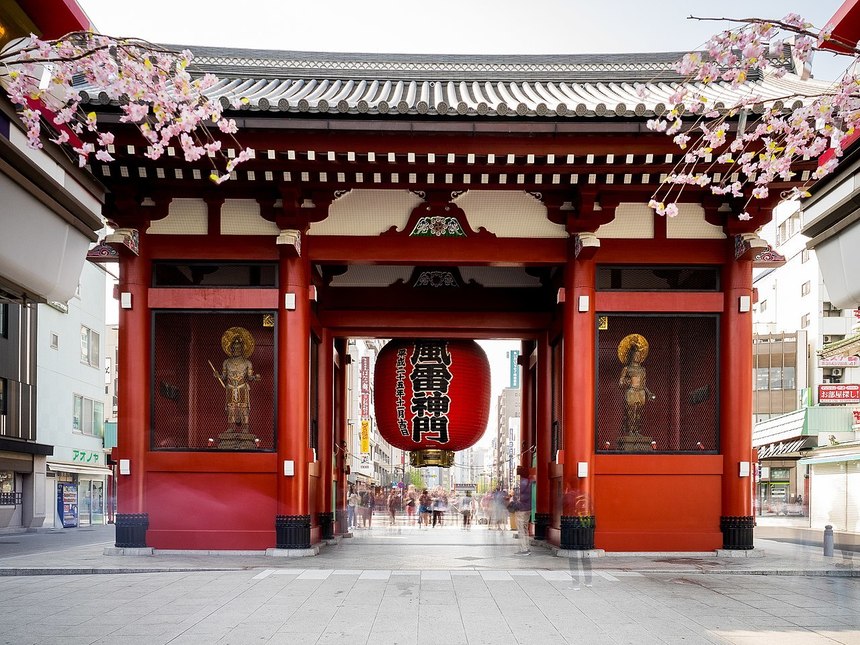 The original version of this iconic Tokyo entrance gate dates back to the 10th century. It is still a much-visited landmark. See more here.  The Kaminarimon has inspired numerous model designers. Woody Joe of Japan has several beautiful, wood, to-be-painted models, including this one. Woody Joe includes a light in the lantern. 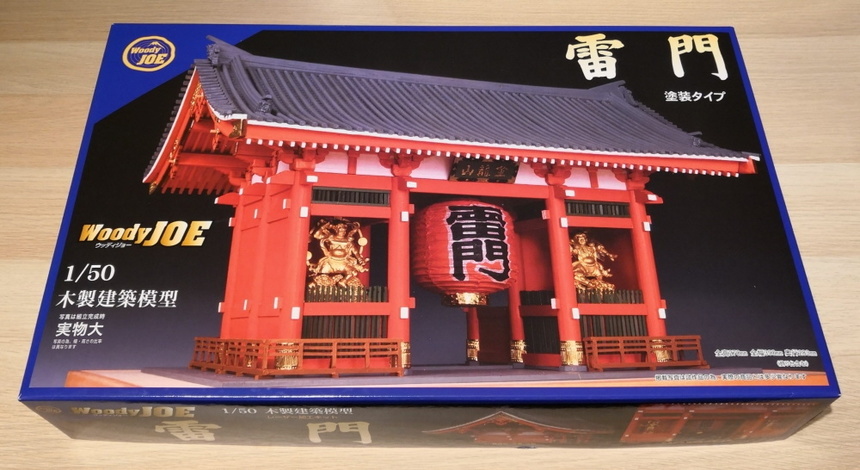 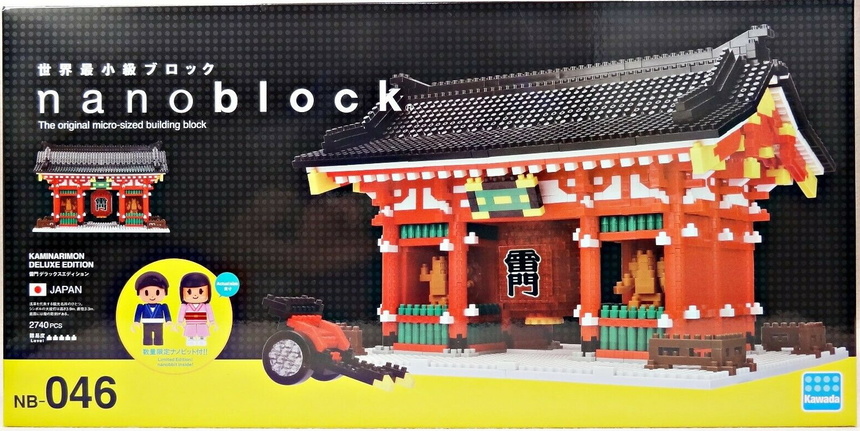 Kawada of Japan has also designed several nanoblock models of this structure from small (about 400 bricks) to the new, deluxe Kaminarimon with over 2700 bricks. Here’s a comparison shot of the two. 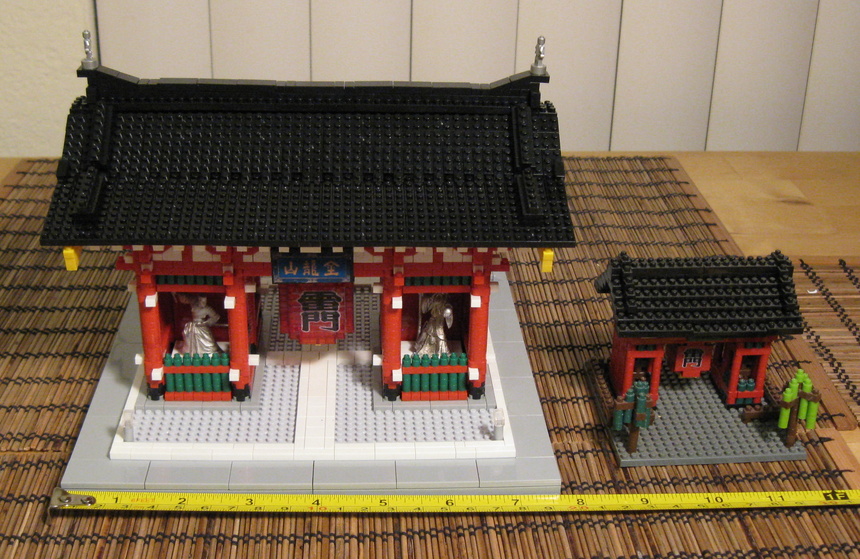 As soon as I received this advanced model, I knew I wanted to light it. There were to be challenges ahead.

Kawada has really outdone themselves in creating very clear, detailed assembly drawings illustrating the over 220 steps. Here’s an impressive example. 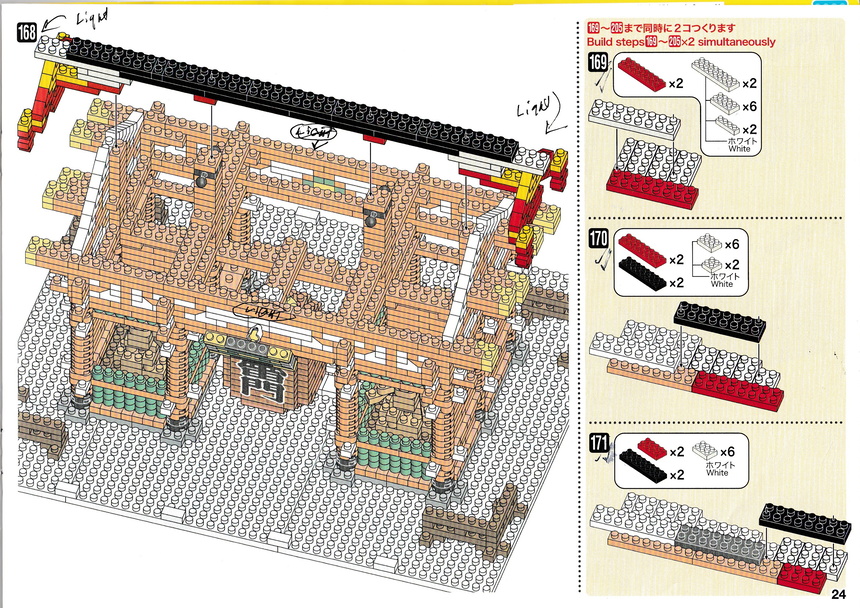 I decided to create two bases for this model—a lower one of Lego bricks and an upper of nanoblocks. Sandwiched between them would be the LED wires which exit up into the model through small openings on the left and right. I departed somewhat from the original Kawada base design in a different use of bricks and tiles. 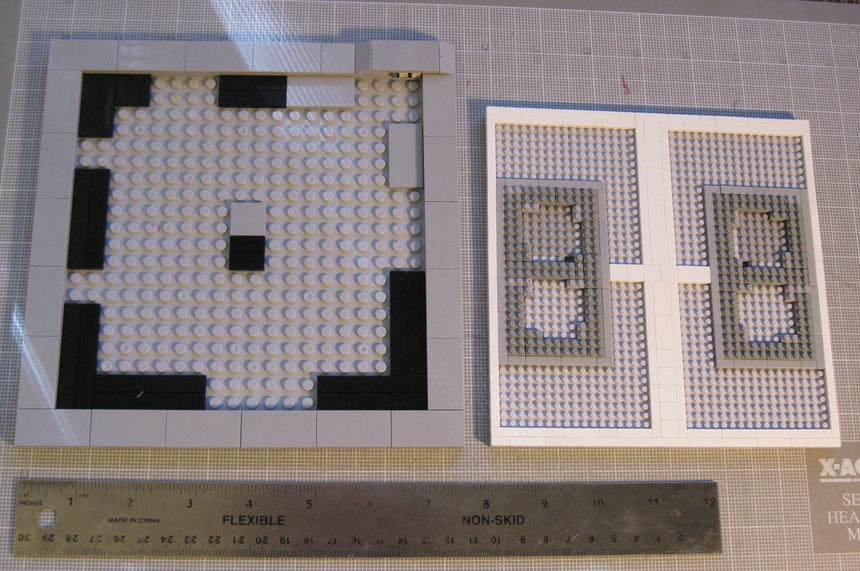 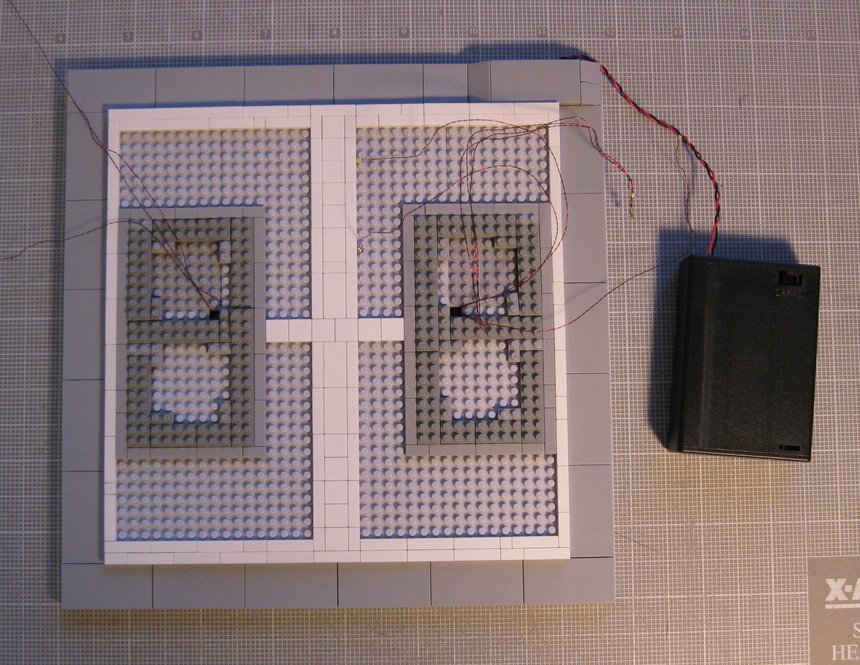 The Kaminarimon has four chambers in each of which resides a statue of a mythological figure (the Shinto gods Fūjin and Raijin, aka the god of wind and the god of thunder, and the Buddhist god Tenryū and the goddess Kinryū). Constructing the figures from the provided nanoblock bricks was hopeless and ruined the look of the front and back facades. Woody Joe includes in their models metallic-colored miniature sculptures of the statues. Kawada should have done the same. I could not locate any tiny figurines of these mythological figures. So, I strayed into Japanese “Dungeons and Dragons” territory and acquired several miniatures of approximately the correct size to substitute. Two were metal figurines in silver color and two were plastic which I painted gold. Not at all the right “deities” but they looked much better than the nanoblock figures. See the comparison in the next photograph. 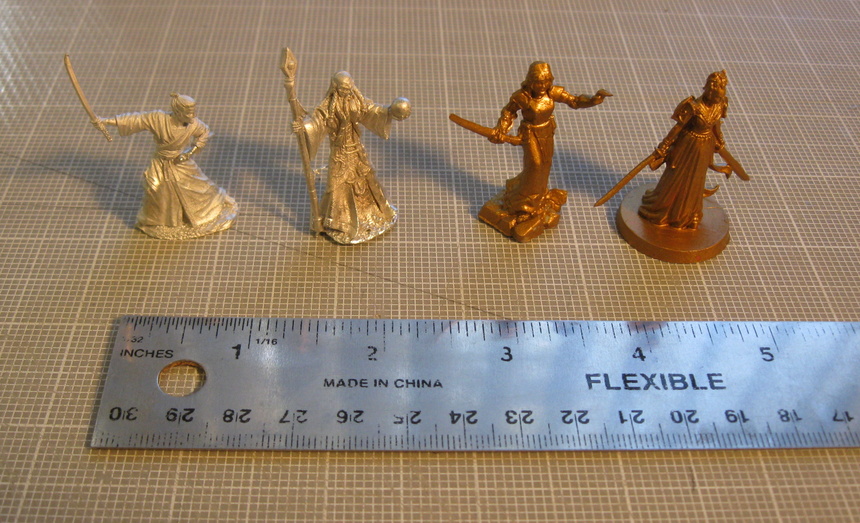 The ever-helpful Rob of Brickstuff once again designed for me a special two-bundle set of nine mini-LED lights with 8 inch and 10 inch wires. These are to be powered by a AAA battery pack attached to a three socket connector. The red wires on the mini-LED lights helped disguise them a bit against a background of red bricks. 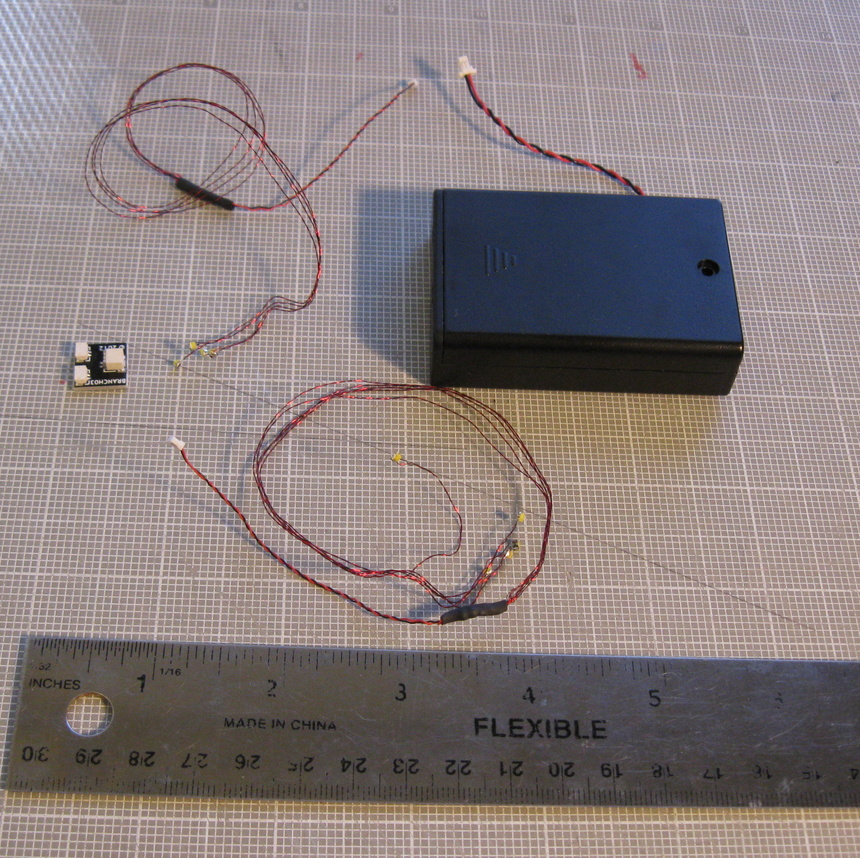 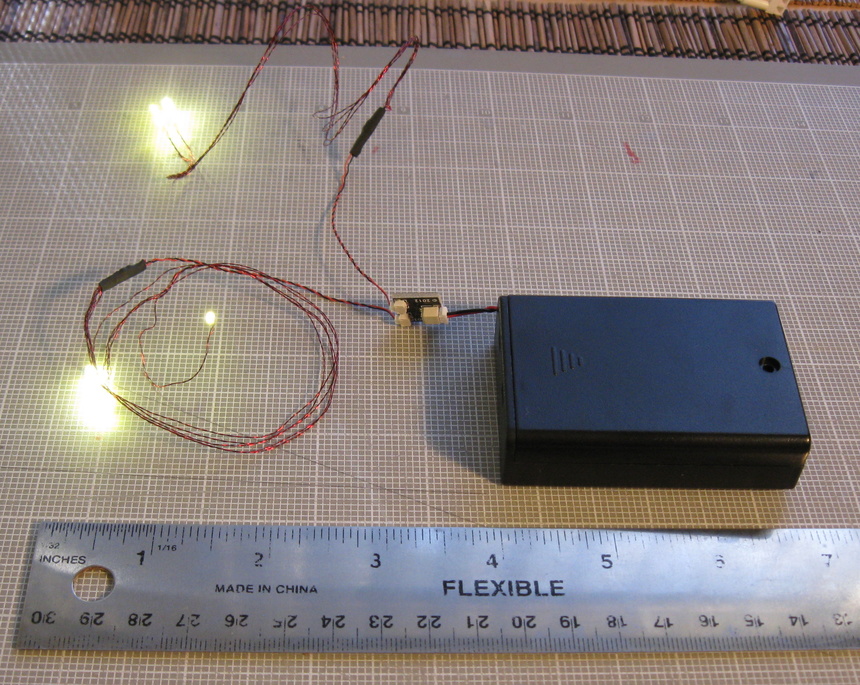 One of the LED’s would light up the impressive lantern constructed mostly of transparent red nanoblocks. The text on the front of the lantern means “Kaminarimon (雷門).” 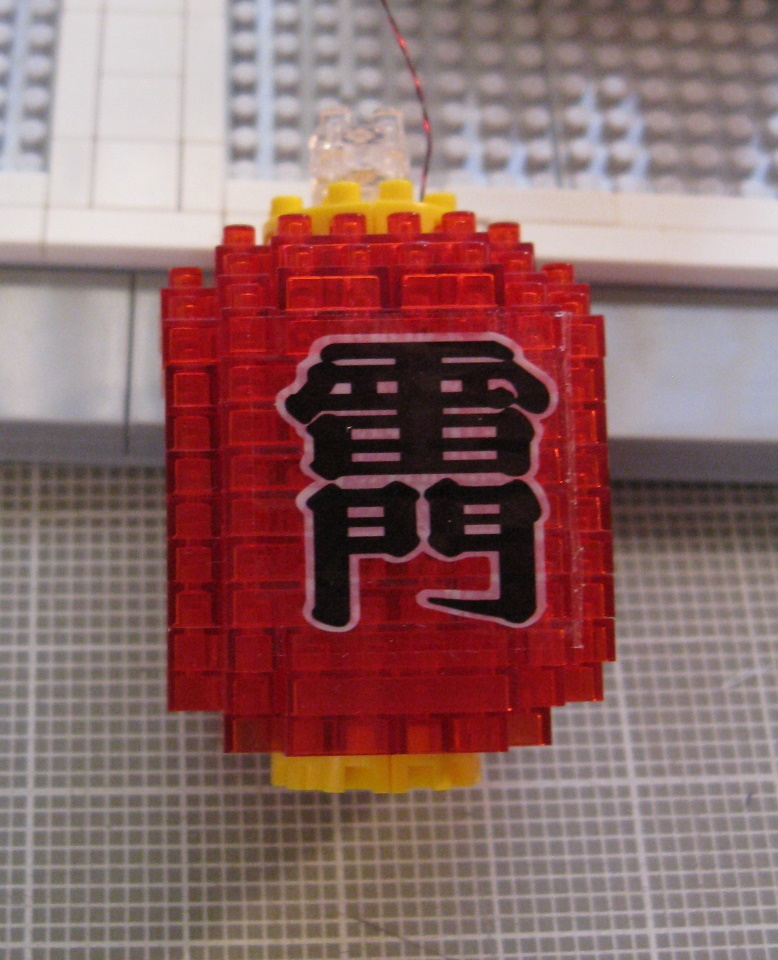 Four more LED lights would illuminate the four chambers of the Kaminarimon. This was  accomplished by adding 2 x 8 stud crosspieces and sandwiching the lights under transparent bricks. 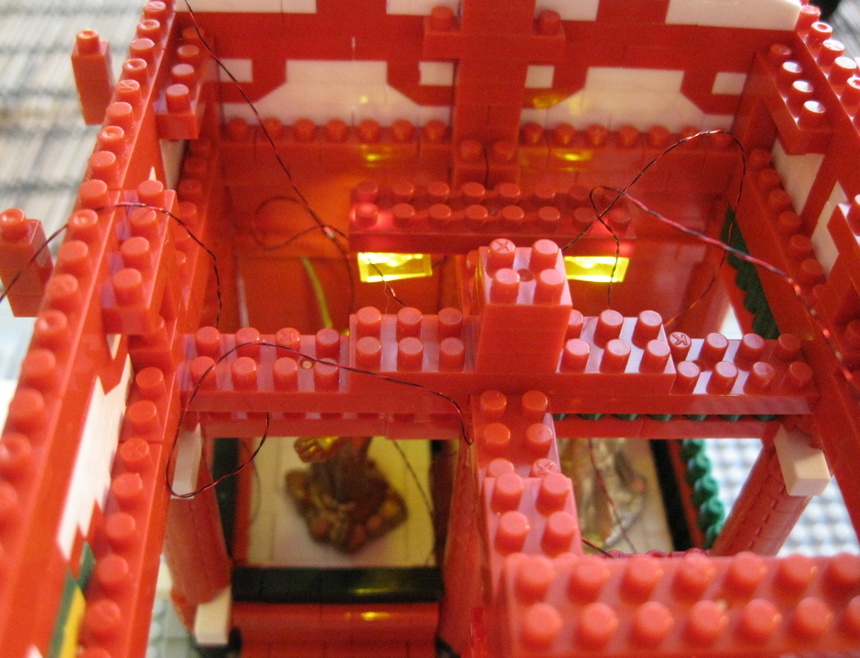 Here are detail photographs of the chambers lit up.

I added two lights to shine down from the ends of the roof. They were placed under the white bricks extending from each end of the roof structure. 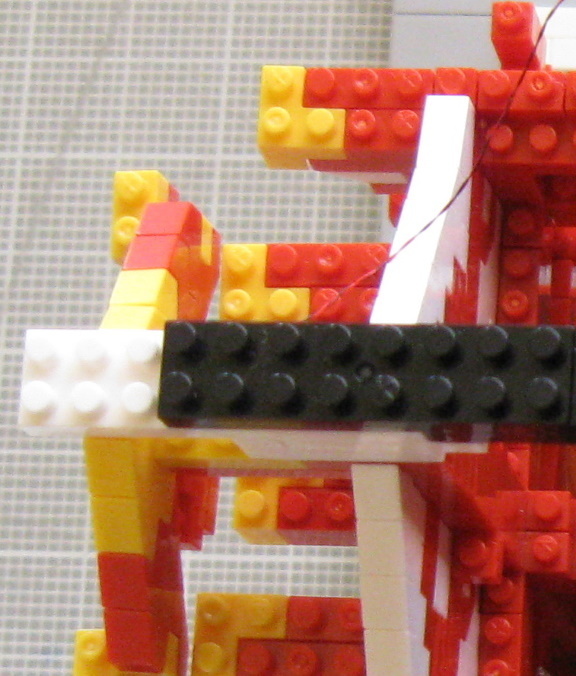 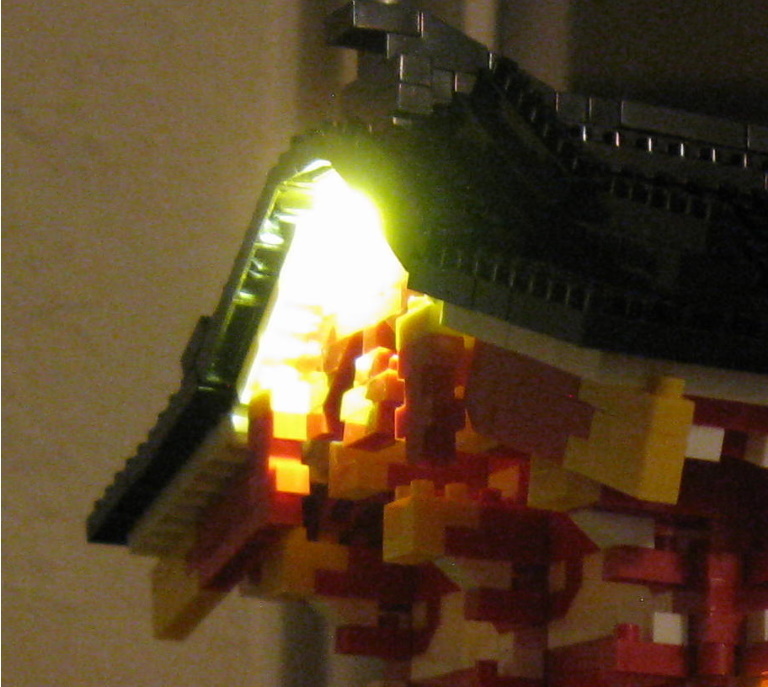 In case you are counting, this adds up to only seven lights...not nine. I found that I didn’t need the last two mini-LED lights so snipped them off. Easy come, easy go. Sorry, Rob. 😥

The roof was rather a wonder of design using ball and socket bricks to create the roof angles and to attach the roof to the body of the building. 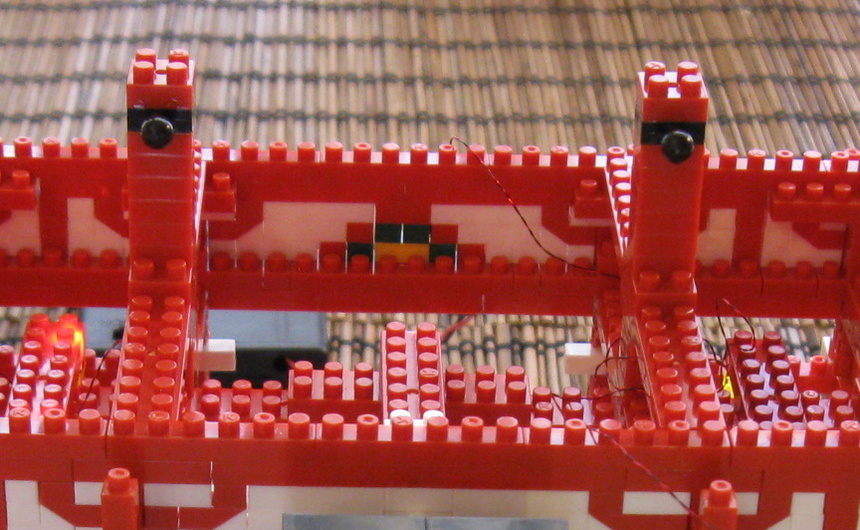 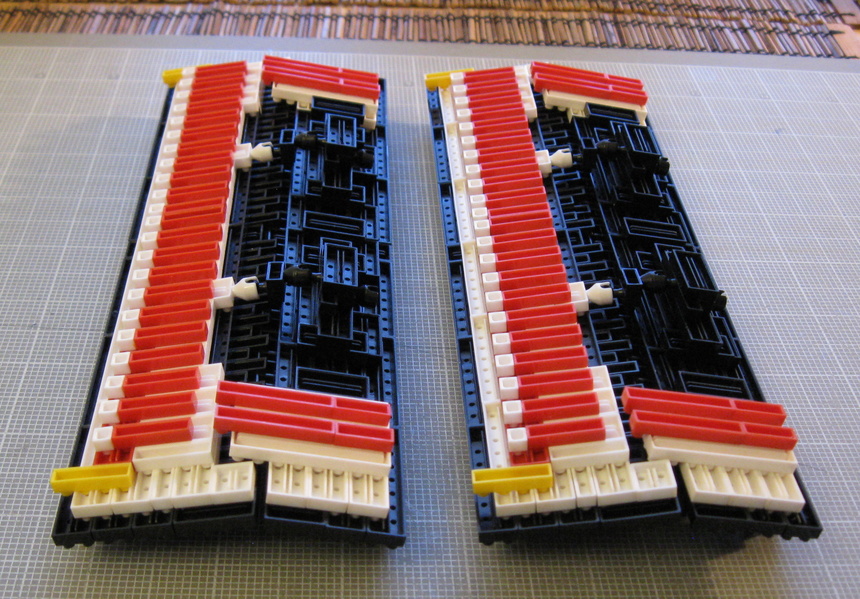 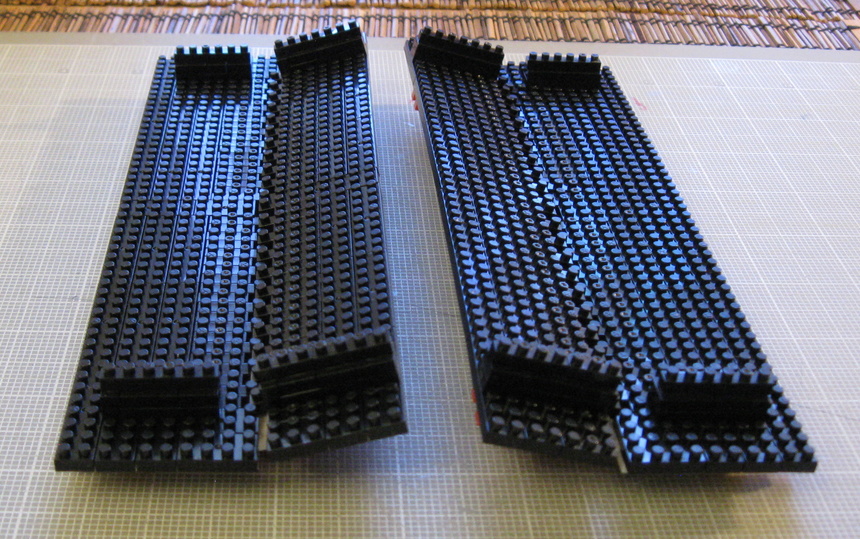 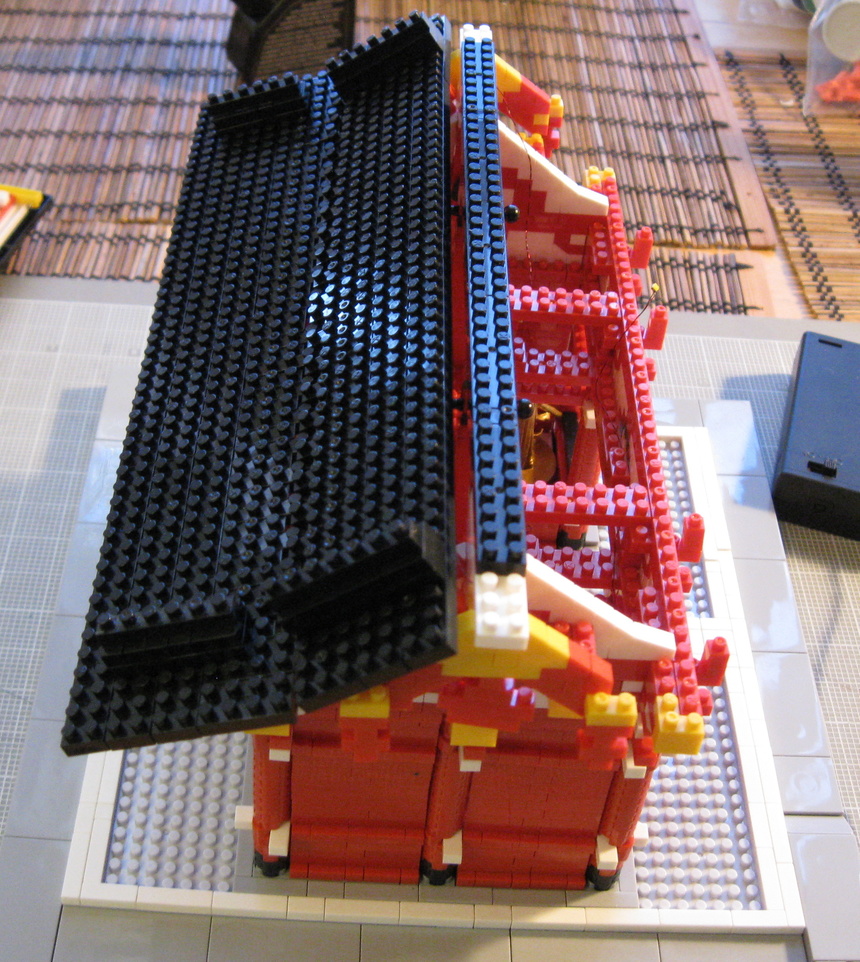 OTHER DETAILS AND CUSTOMIZATIONS

The levels of the “stands” on which the four figures sit had to be adjusted downward somewhat to accommodate their heights—particularly for the gold-painted ones which still proved to be a bit too tall.

I was not satisfied with the original look of the name plate which hangs above the main entrance.

So, I made a print of the actual name plate from a photograph and glued it onto a backing of nanoblocks. 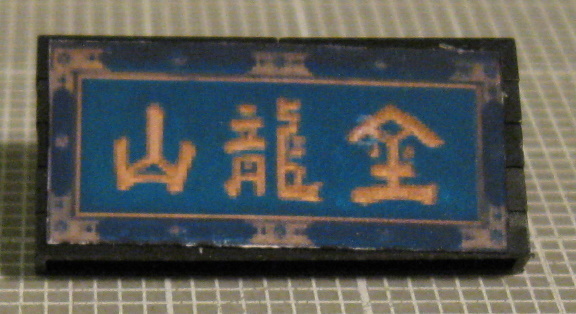 The text translates to “Sensō-ji.”

On all four outer walls of the Kaminarimon are small white protrusions. These decorative elements are handled with studded white bricks in the original design. I substituted white tiles which, I think, look more natural. 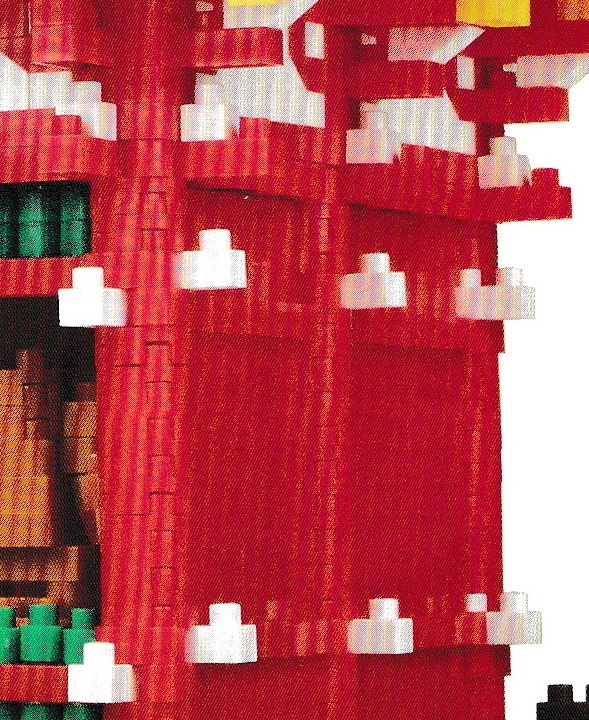 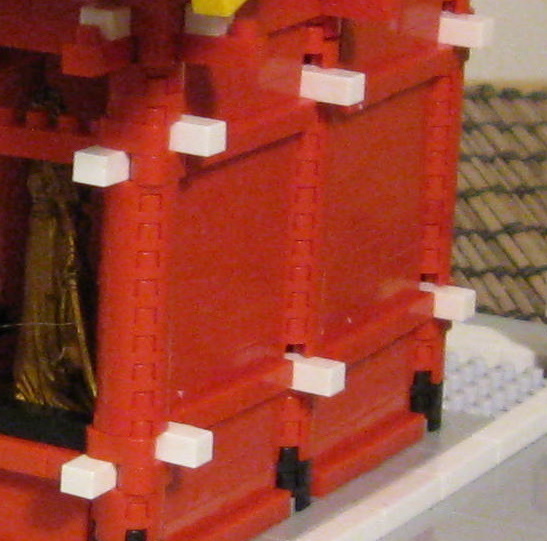 I fiddled a bit with the final look of the roof by adding a row of tiles instead of bricks on the apex. I also indulged my sense of whimsy by placing two tiny, silver Lego figures on the ends of the roof.

Here are several photographs of the finished model in daylight and in dim light. 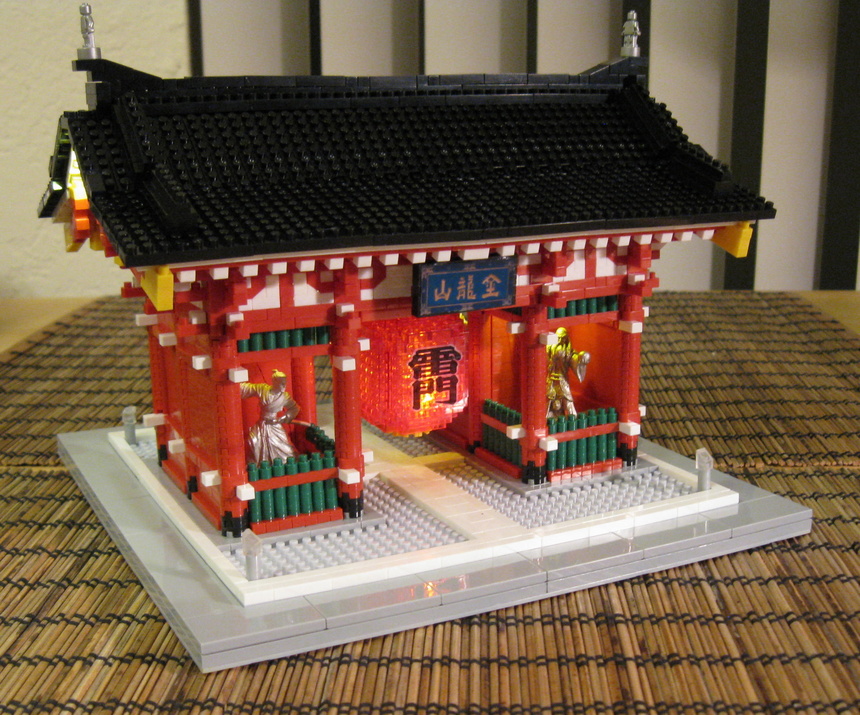 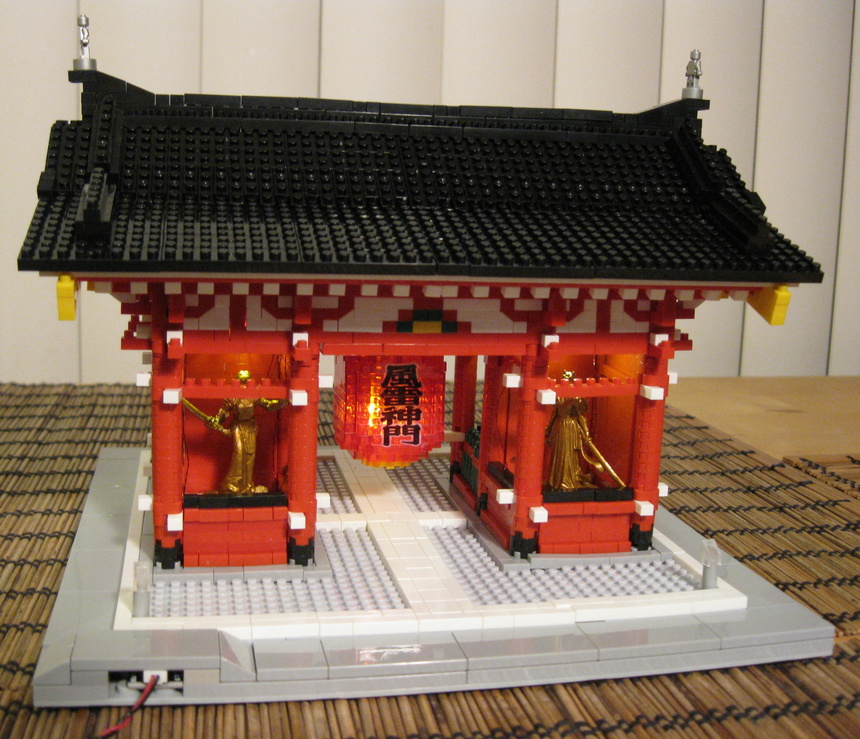 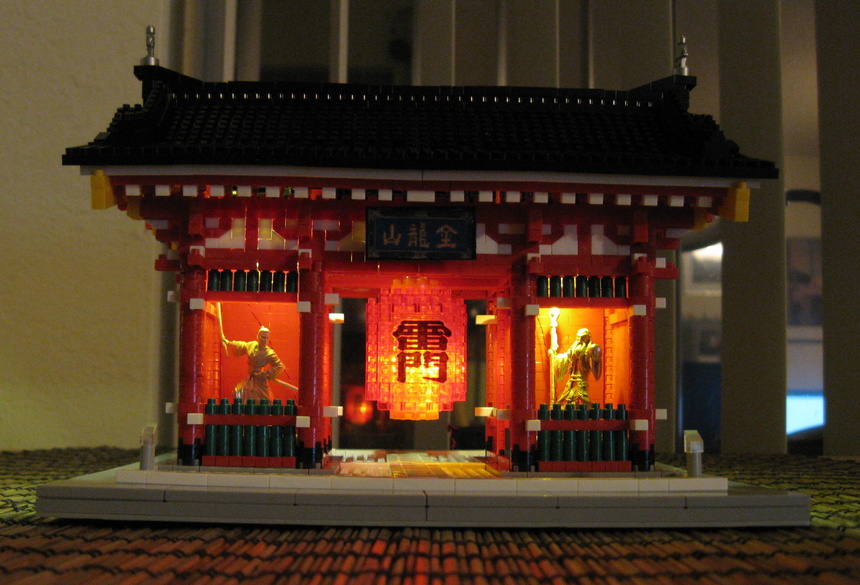 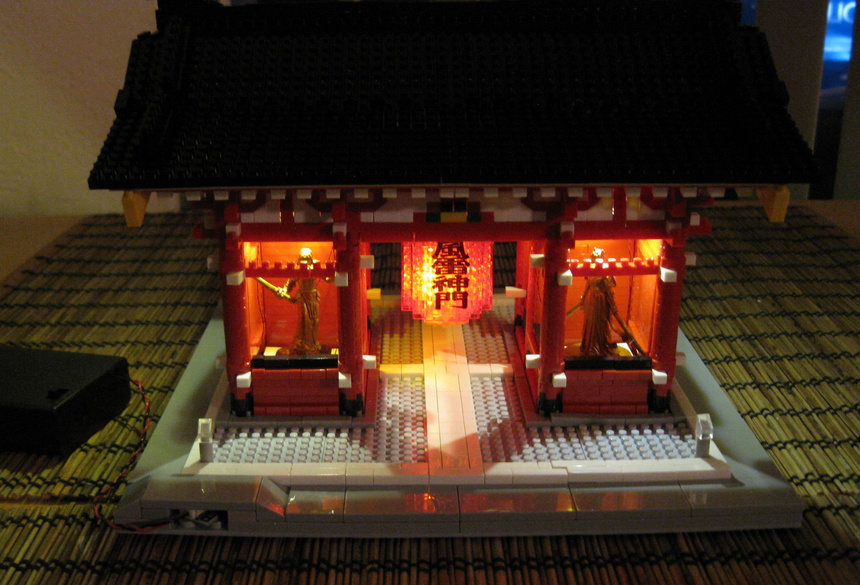 I find this model looks pretty impressive in the end and is helped by the lights—particularly those over the four chambers. You make up your own mind. 😉 You can view additional shots, including a series of build photographs in my Google gallery here.