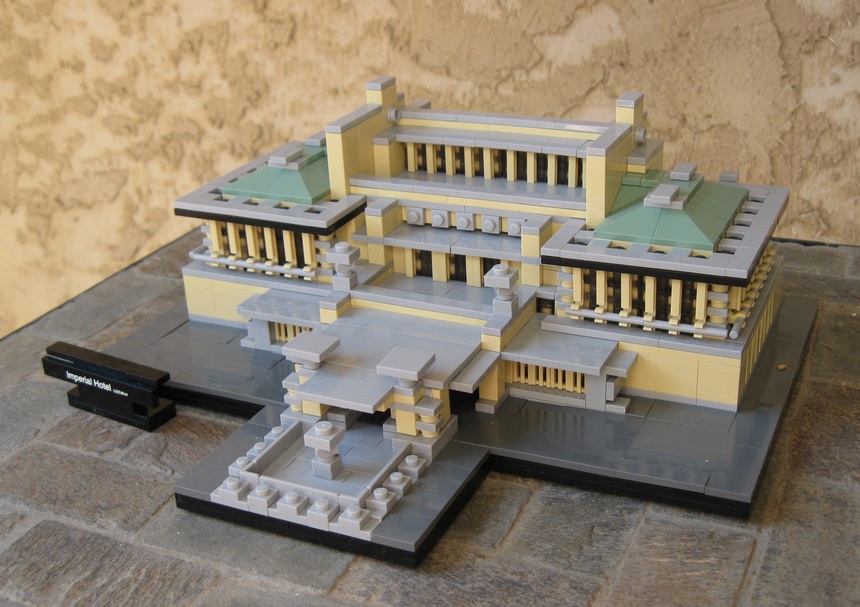 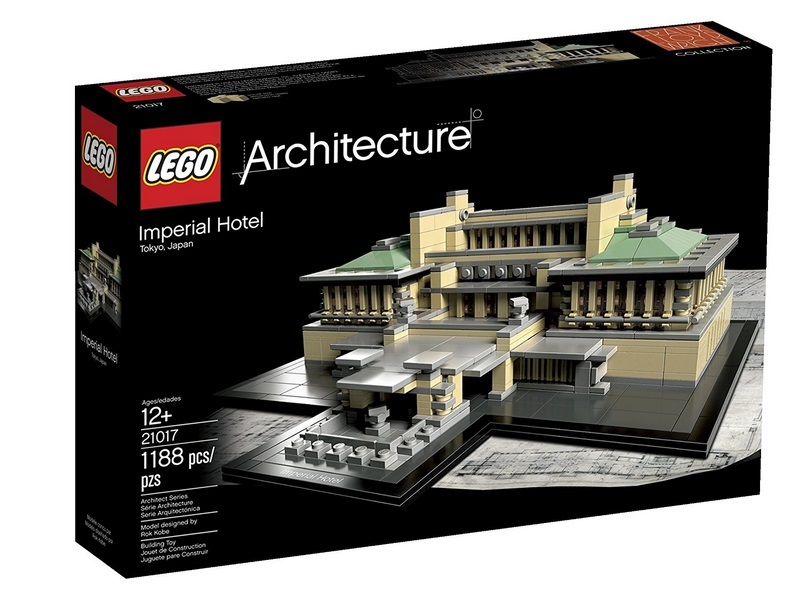 I thought it was worth the $30+ to purchase the Chinese clone version and use it to see if lighting the model was feasible. When the kit arrived, box-less, from China, I quickly discovered that this was not an exact clone but rather a two-thirds size clone of the Lego Architecture version. The LOZ model has the same number of pieces (1188) in the same colors. But, each LOZ brick is two-thirds the size of the corresponding Lego brick. No spare Lego bricks lying around would of any use for altering or customizing the model. The Lego and LOZ bricks are not compatible. 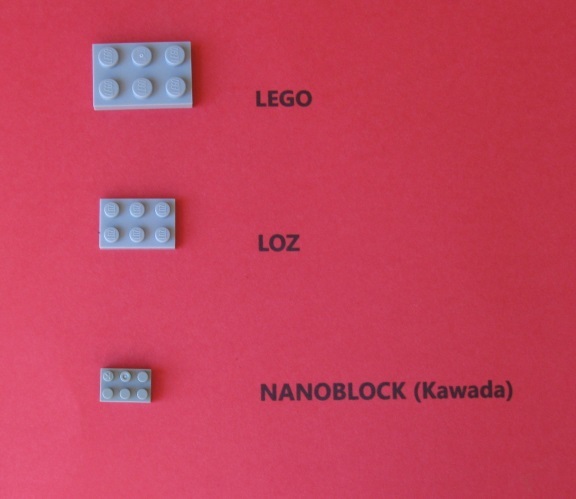 This is the main photograph I relied on for inspiration. It shows the Imperial Hotel central lobby and reflecting pool as they look after being rebuilt at The Museum Meiji-mura near Nagoya, Japan, between 1970 and 1985 (17 years after the original was demolished).   One can easily see what a nice job the Lego Architecture designers did with this model. 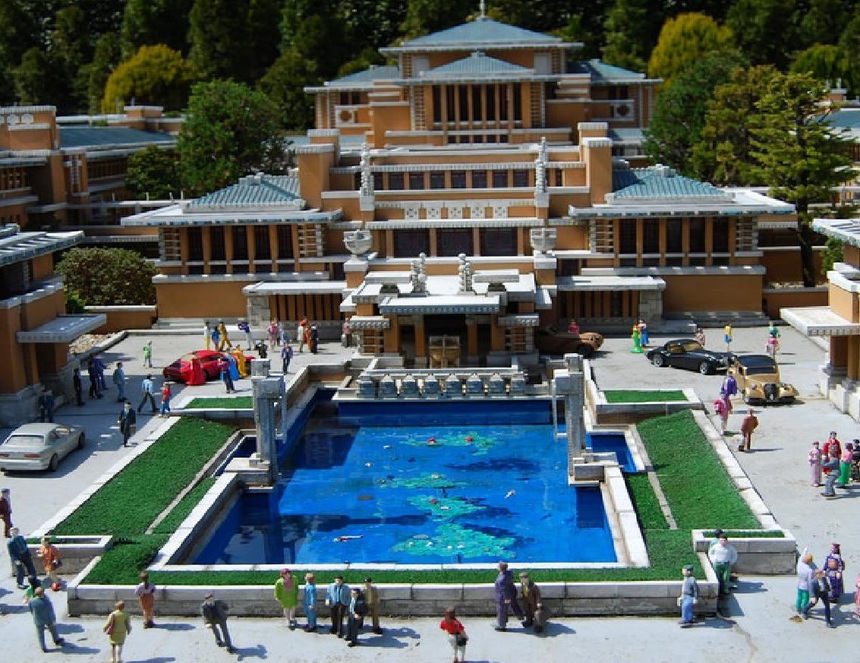 To create a supply of spare bricks, I ordered a second set of the LOZ Imperial Hotel from China and, eventually, the LOZ version of the United Nations Building which is also two-thirds the size of the Lego Architecture version. Both spare sets would increase my stock of transparent black and transparent blue bricks which I knew I’d likely need to solve lighting issues. I also purchased Brickstuff lighting supplies: 6 inch and 3 inch Pico LED lights, LED light strips, the 3xAA battery pack, 1:9 expansion adapters with micro plugs, 1:2 expansion adapters, extra connecting cables, and sticky squares. Thanks, Rob!

There are twelve obvious locations for lighting:

My basic approach was to build slowly, anticipate where lights would go, move or delete or substitute bricks to allows light strips, Pico lights and adapters to fit and stay in place, and—most importantly—create a way for each light to be “unblocked” (i.e., provide a path for the light to be visible). A couple of examples will explain my approach. Although I worked with LOZ bricks, these examples will work with the full-size Lego bricks, as well. I’ve included the Lego part numbers, when possible. 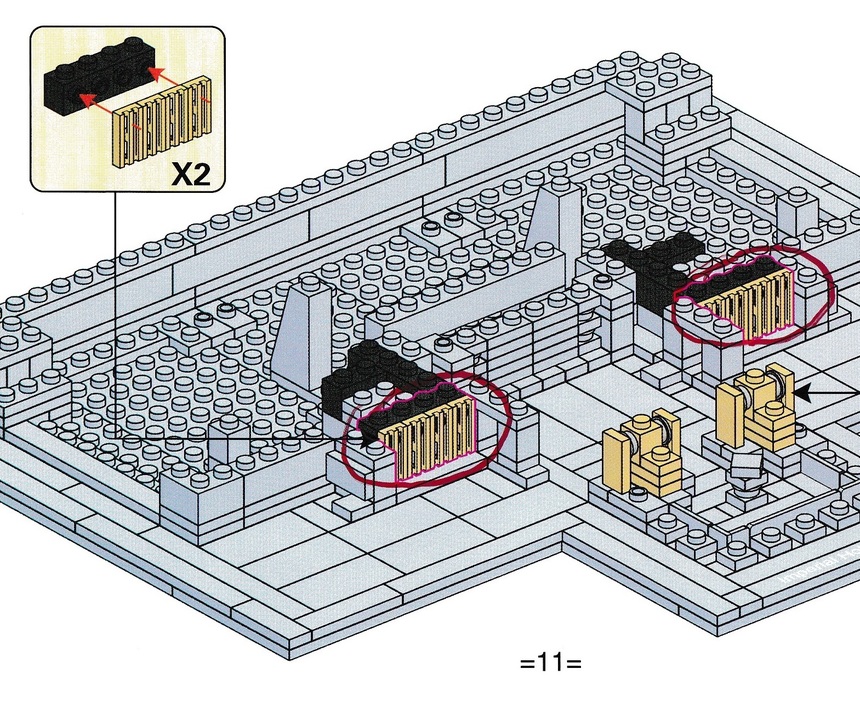 It is clear the grated windows to the left and right of the entrance will be a problem. There is a large black brick (four studs wide, with studs on the front, Lego part no. 30414) which blocks any light getting out the windows. This brick had to go. I placed two 1x1 studded bricks (Lego part no. 87087) on the left and right of the space where the black brick was to go and added transparent bricks beneath and between them. Since the two tan grate bricks lost two of the studs behind them, I glued the two grates together. You can see the light from a Pico coming through the grates in this photo. 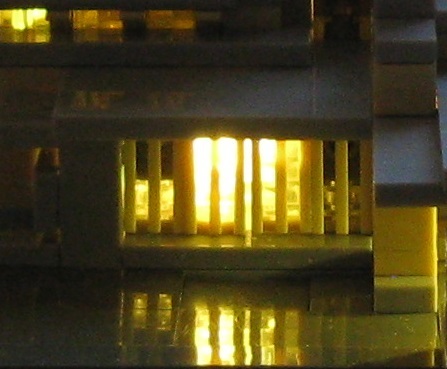 Example 2: Windows on Left Side of Lower Level 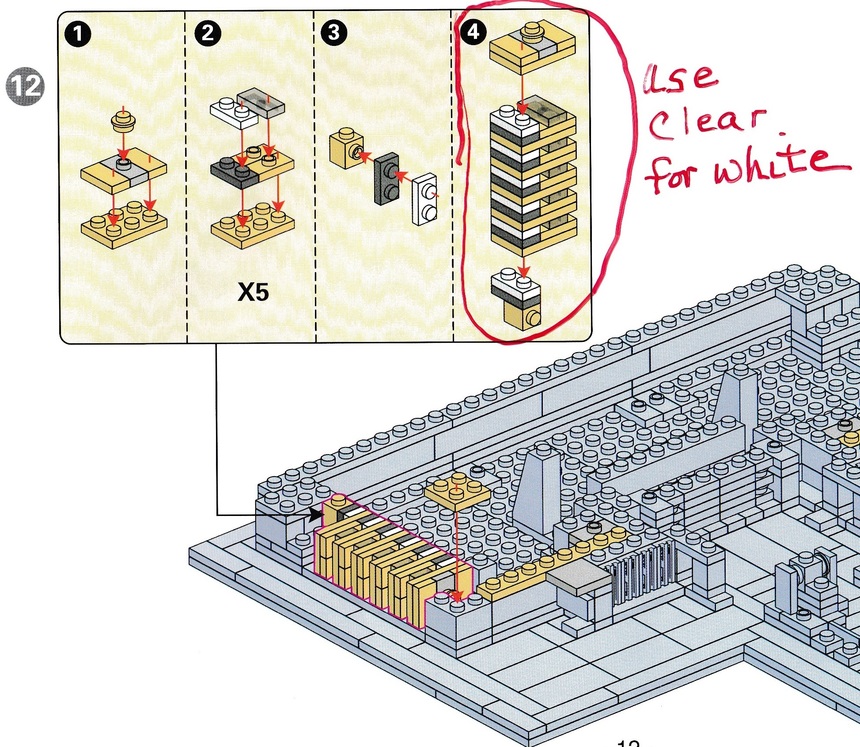 The instructions show 1x2 white bricks being sandwiched into an assembly which forms part of the side windows. I replaced these white bricks with clear 1x2 bricks (Lego part 3023) to allow the light out. This solved the light blockage problem in both halves of the left and right side windows. 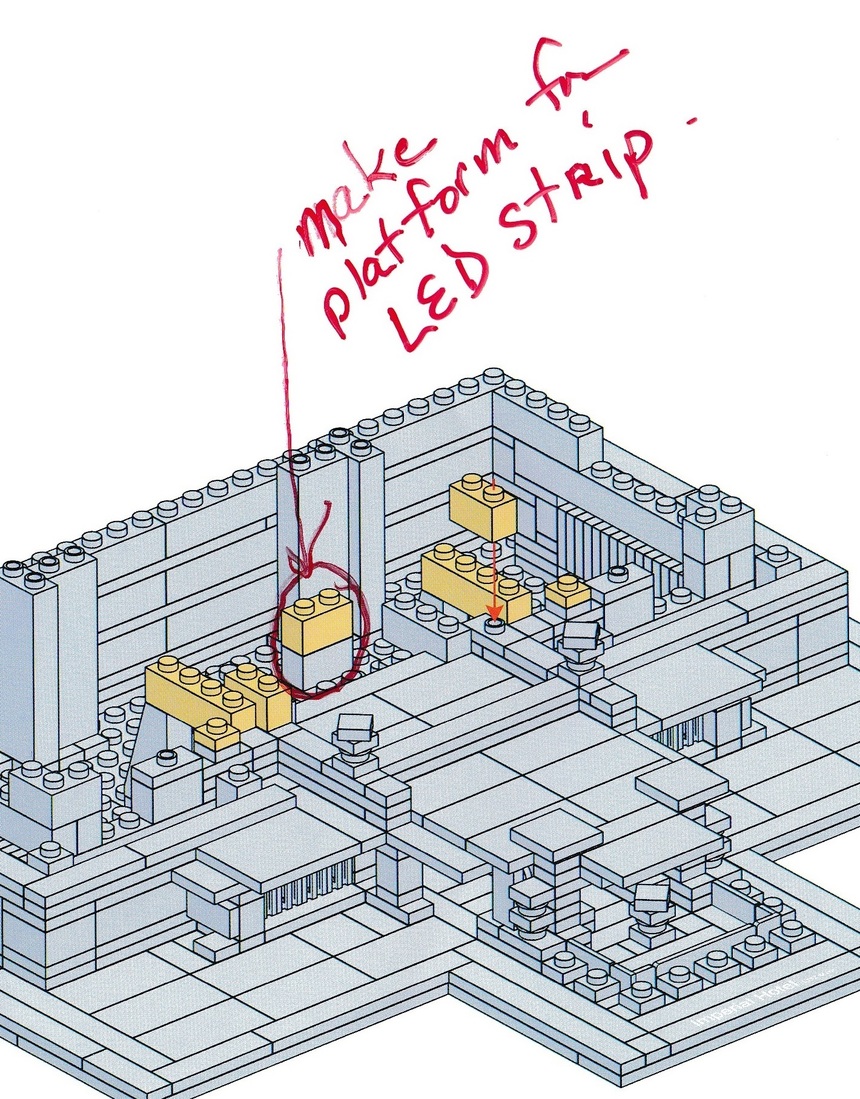 Step 21 on page 22 shows a tan 1 x 2 brick being installed. Since this is the area of the 2nd level where I planned to install an LED light strip, I modified the building plan. I constructed a little platform with a 2x4 white plate (Lego part no. 3020).  By adding two stacks of 1x2 round plates (Lego part no. 4073) in the rear and a stack of 1x2 clear blue plates in front, I was able to sandwich the LED light strip onto the platform to shine out the second floor windows/doors. 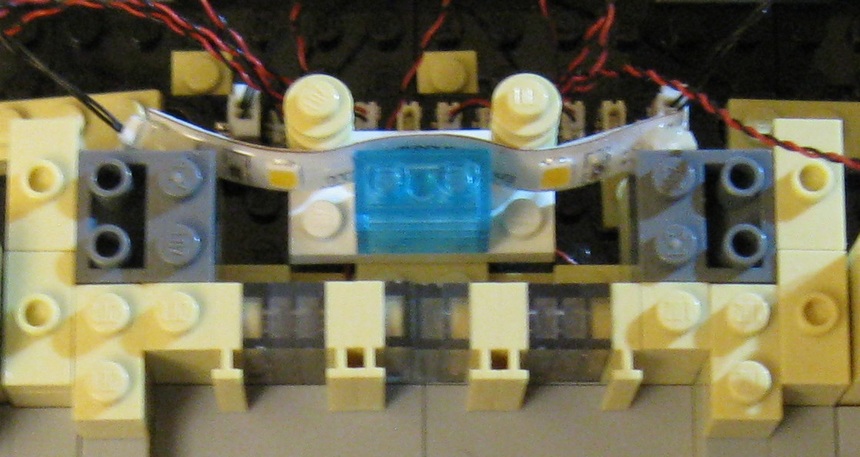 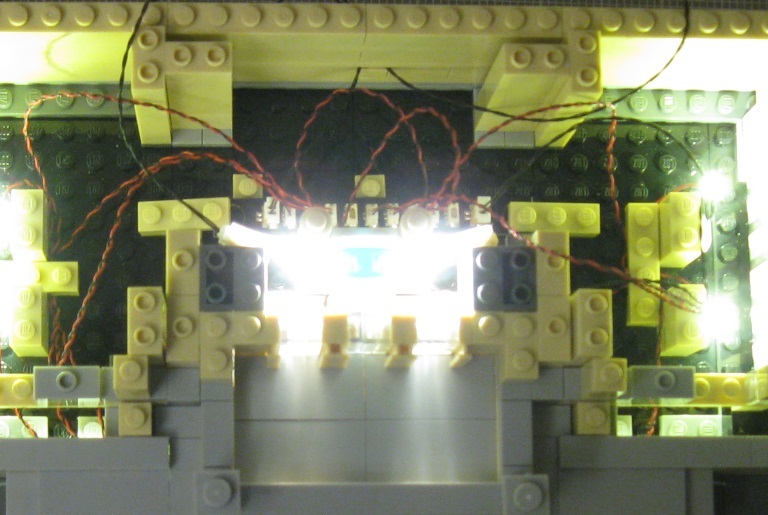 These three examples should illustrate the approach I took. Another issue that arose was attaching the Brickstuff 1:9 expansion adapters and the 1:2 expansion adapters. The latter were fixed in various places by the sticky squares; the former were generally pinned under several bricks, as in this example:

The Pico light wires were thin enough to sandwich between even these smaller LOZ bricks—such as the 6 inch Pico light exiting from the 1st level front of the building to be pinned with bricks underneath the overhang. This allowed the front areas to be more lit up. 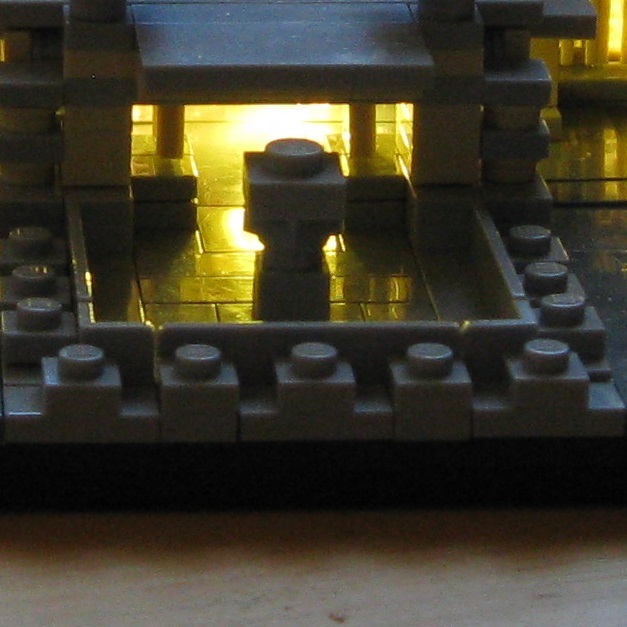 Besides lighting the Imperial Hotel, I was eager to create a reflecting pool for the model. One afternoon I sat with my supply of nanoblocks and experimented—frequently staring at the photograph of the rebuilt hotel and pool. The structure finally took shape with about one hundred individual nanoblock bricks. I tried to use colors which would mesh with those of the hotel. Fortunately, I had a good supply of clear blue nanoblocks for the water in the pool. 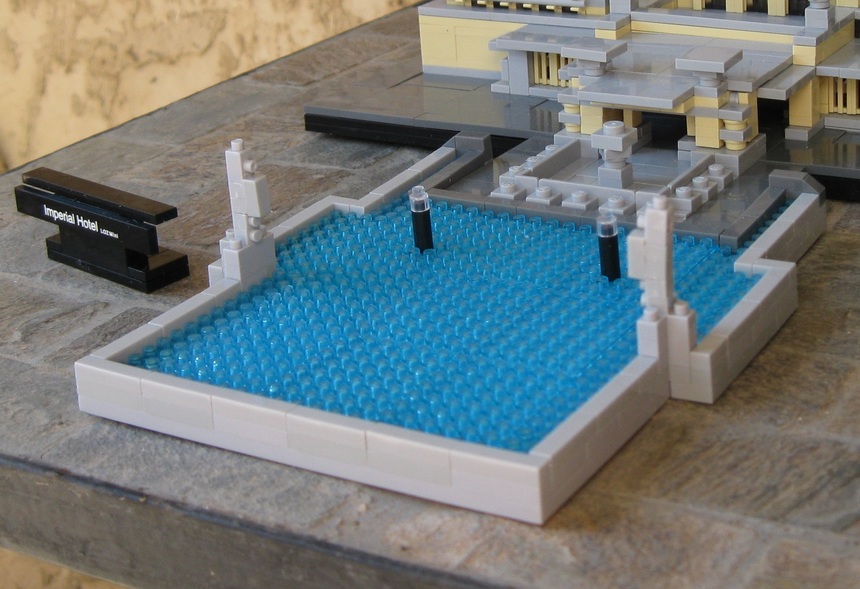 I’m not sure I remember all the little changes I made as I progressed with the build. A couple come to mind.

This build of the LOZ Imperial Hotel contains 1188+ LOZ bricks, 100 nanoblocks, and 3 Lego bricks. Any guesses as to where the three full-size Lego bricks appear?  They are in plain sight.  You’ll have to decide how well the Imperial Hotel looks lighted up. I’m sure there are many different ways this could have been accomplished. I chose one and winged it most of the way. Here are a couple of more photographs, unlit and lit.  My full Google Photos gallery containing more photographs of the model, a short video, annotated scans of pages from the instruction manual, and a few in-process build photographs can be seen here. 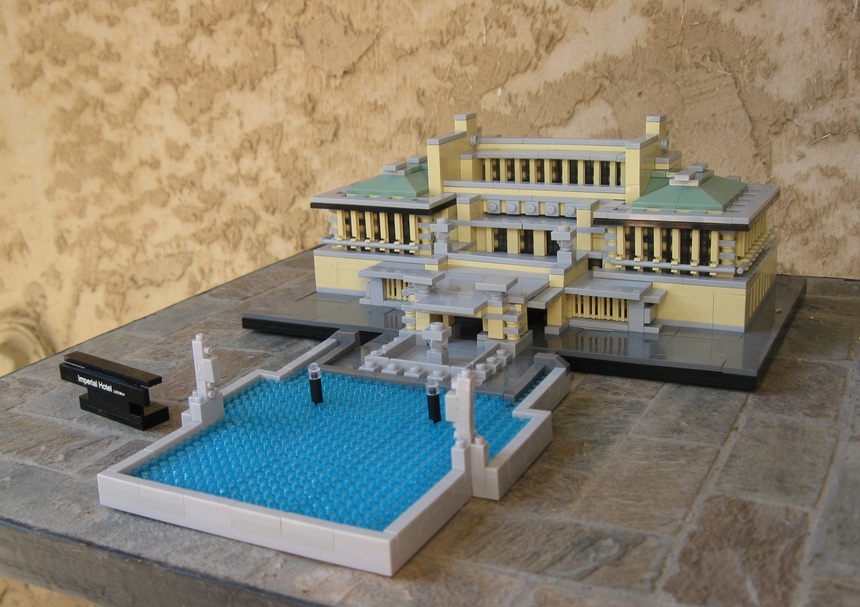 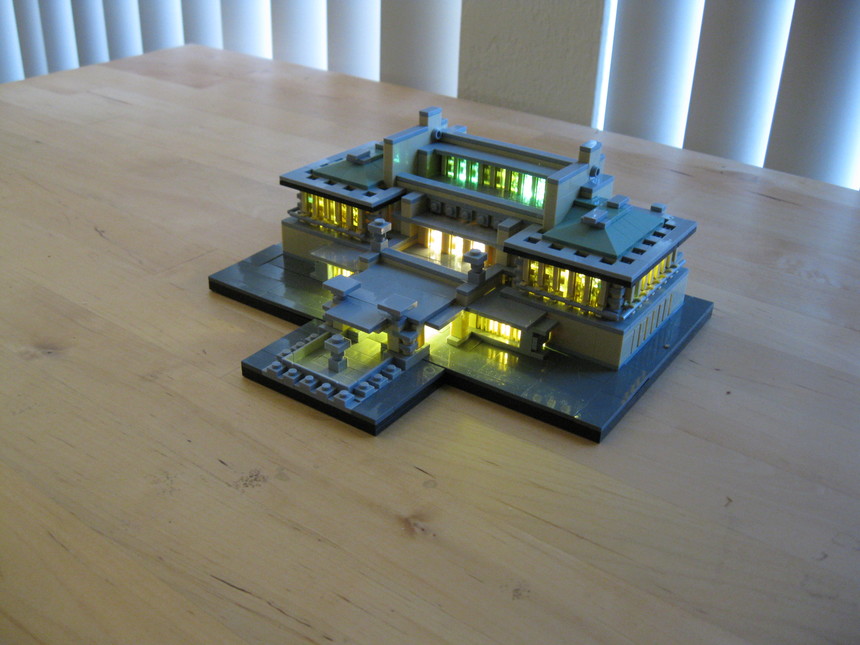 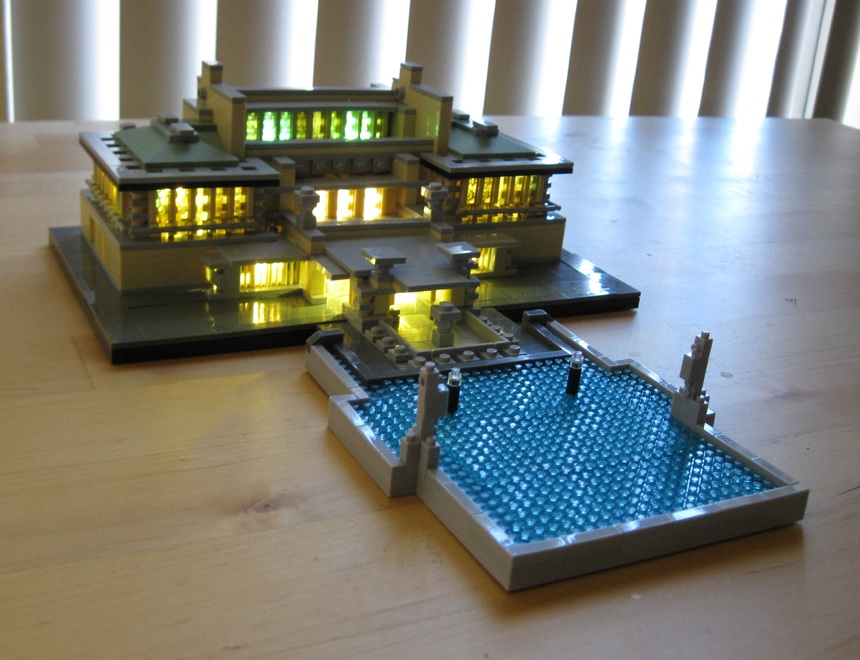