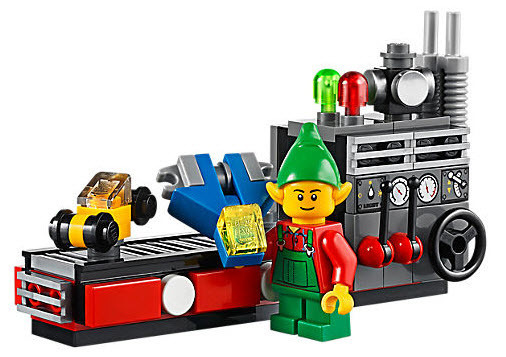 So, I'm trying to get a jump on the holidays.  Well... it started with wanting to mess with ballast track building, which segued into ballast track with snow, which morphed into all that passing through a snow-covered mountain.  Which took me to a LEGO Ideas set that, woefully, had a mere ~480 votes that incorporated a secret Santa workshop into the mountain, and... anyway...

To light the toy-making machine in the workshop, I'm thinking a red and green pico (or cool whites under the colored piece; I'm torn), but none of the lighting effects feel quite... right.  (Like the one found in Santa's Workshop # 10245, below.)

Thinking almost a pattern like a 2:1 ratio of light "on" timing of one channel over the other... there's patterns that are close (prototype railroad crossing, ditch lights without the slow fade-out), a few of the effects in the 12-pattern LEC (like pulse, but not a 50/50 on/off).  Y'know?

(And yup, I've accepted the light piece themselves may need a drill to get light through the modified tile light holder, or switch up the lights style to round plates or even the domes similar to what's on the Ninjago City radio tower, pn# 4773...)