The full code for this lesson [A_NaMaLiCS_WorkingCode_01.ino] is attached as a zip file.

In the updated project code, everything remains the same as the previous version found in the NaMaLiCS Tutorial Supplement 3 until you get to the loop() section where calls to the two functions (toggleOn & toggleOff) are introduced.

As with the blinkPixel function, the toggleOn and toggleOff functions take two parameters.  First, the number of the pixel that will get the effect and next, the delay in milliseconds before the effect starts.

However, as more effects are introduced, calling each effect on each pixel gets unwieldy, so we're going to change how effect functions get called.  Instead of have a separate line for each effects function call for each pixel, we'll put it all into a nice compact for-loop.

Notice in the first set of blinkPixel function call, the pixelNumber and the effect delay are specific numbers.  In the for-loop, variables are introduced so that if you make changes, you don't have to repeatedly retype a set of numbers.

Immediately after getting and storing the current time we need to add some variables that will used in all the for-loops.  In this way, to make changes to the pixels and the timing of the effects, you only have to change one number.  Three variables are added, pixelNumber, fxOffset and fxEffectStart.

If you look at the rest of the effects for-loops you will see each uses the same offset calculations.  However, what makes each effects for-loop unique is updating the fxEffectStart value between each for-loop.  The updated value takes into account how long it took for an effect to complete for all the pixels.  After three seconds of blinking, all the pixels are turned off simultaneously, so there is a negligible amount of time used.

However for the first toggleOn sequence, each pixel is turned on 500 milliseconds after the previous pixel was toggled. That means the entire sequence of 9 pixels, each taking 500 milliseconds to complete and makes the effects total time 4500 milliseconds.  If you start a subsequent pixel effect before the 4500 milliseconds has elapsed, the next effect will interfere with the current effect...and really strange things happen.  Sometimes, they are very interesting.

So between each effect for-loop the fxEffectStart value gets updated to include the time it took for the previous for-loop to finish.

Comparing the blinkPixel and the toggleOn code you can see they are mostly the same.  The same template is also used for the flicker and fade effects.  [differences are highlighted in bold] 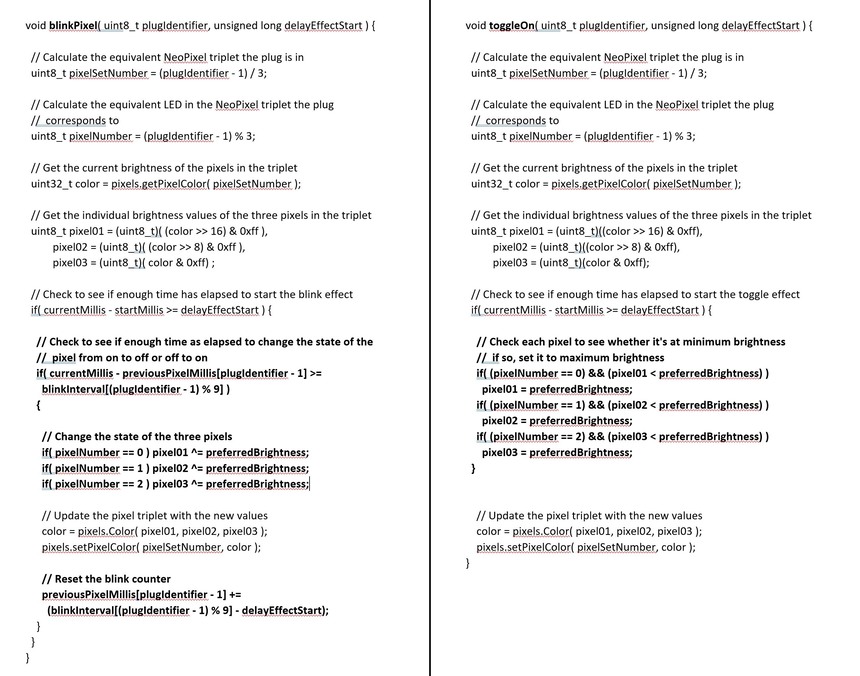 The core of the blink function is flipping the state of the pixel.  Doesn't make any difference if it's on or off, what ever state the pixel is in, change it to the opposite state.

The core of the toggle functions is checking whether a pixel is on or off then switching its state.

Next up, how real streetlights work...G_FADE_OnOff.