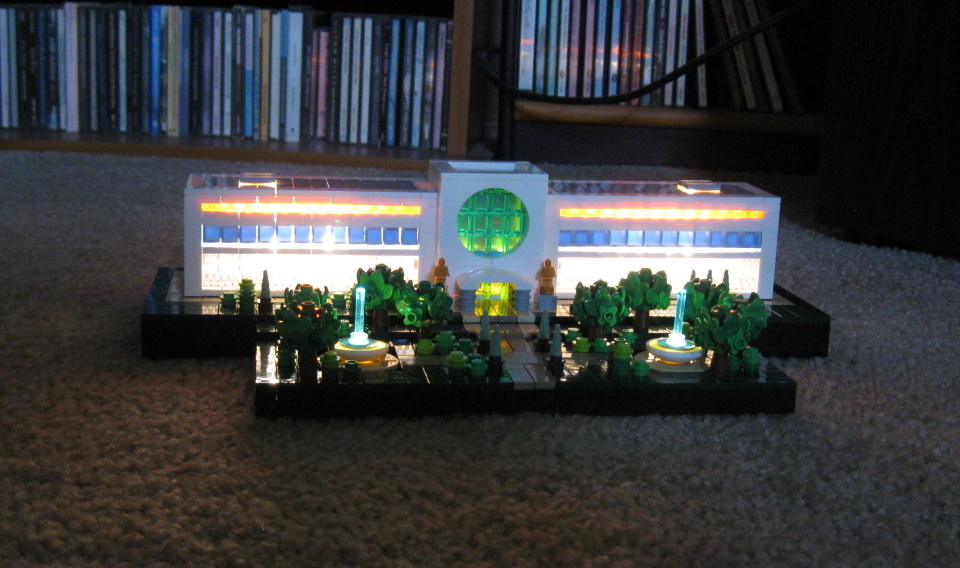 The designer, aegir, describes this lovely 1100+ brick MOC as the “Bull’s Eye." An apt name. 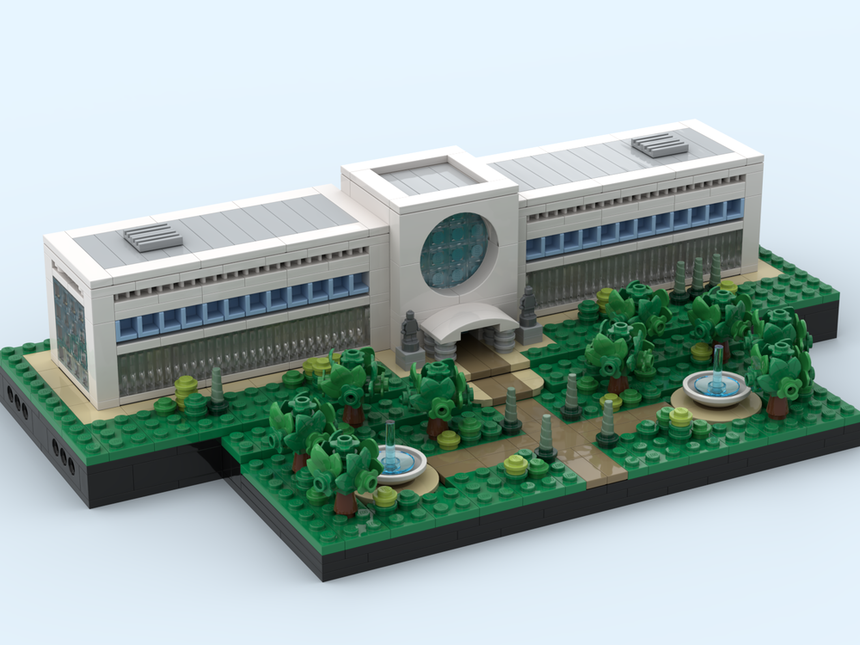 Aegir speculates this may be a building with a large indoor swimming pool or a university structure or a library. Quite an attractive design with the grass and flora out front and two great fountains. As soon as I saw all those windows, I thought about lighting it—probably over-lighting it. That process gave me another, somewhat infernal slant on what this building might be—a mad scientist’s research institution where all manners of strange things go on under shining and flickering lights.

Knowing I would not be using this building in any sort of modular set-up, I was able to eliminate many of the Technic bricks on the sides and rear but retaining those needed for Brickstuff light wires and extension cord wires to pass through. [Rob: I’d forgotten that the plugs on the ends of your extension cables do NOT fit through Technic brick openings. Could we do something about that? ;-)]

I made a number of cosmetic changes (my whims, generally) and alterations to allow light from the LED’s to blaze. I used a number of Brickstuff Pico LED’s and extension cables of varying lengths, a 3xAA battery pack, several expansion adapters of various sizes, and a new “flickering” product recently introduced.

Changes began right at the start of aegir’s great set of PDF instructions. Black Technic plates and bricks and two green Technic plates under the fountains allow the battery pack cable, extension cables and LED wires to go where they need to. 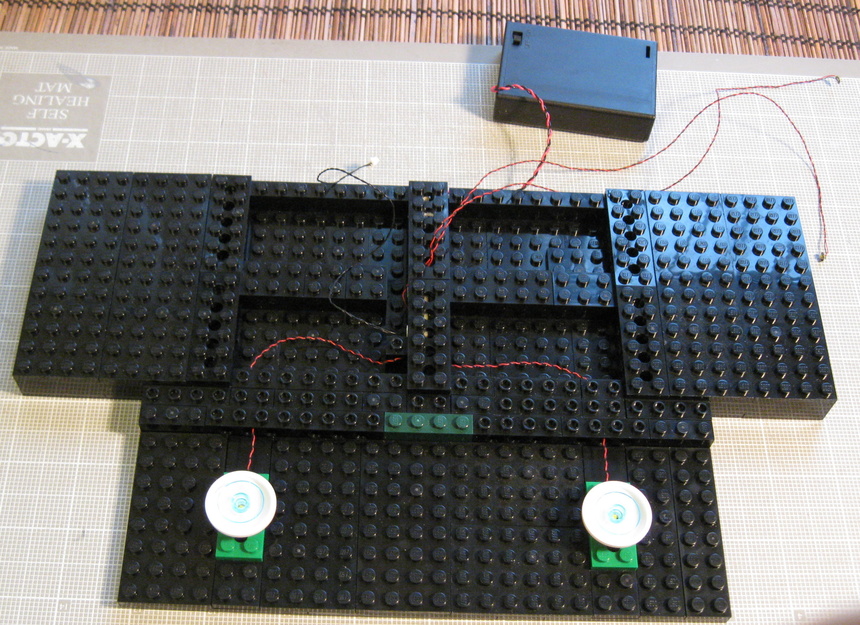 The build continued upward with the two “special” LED’s threaded through additional Technic bricks and plates. 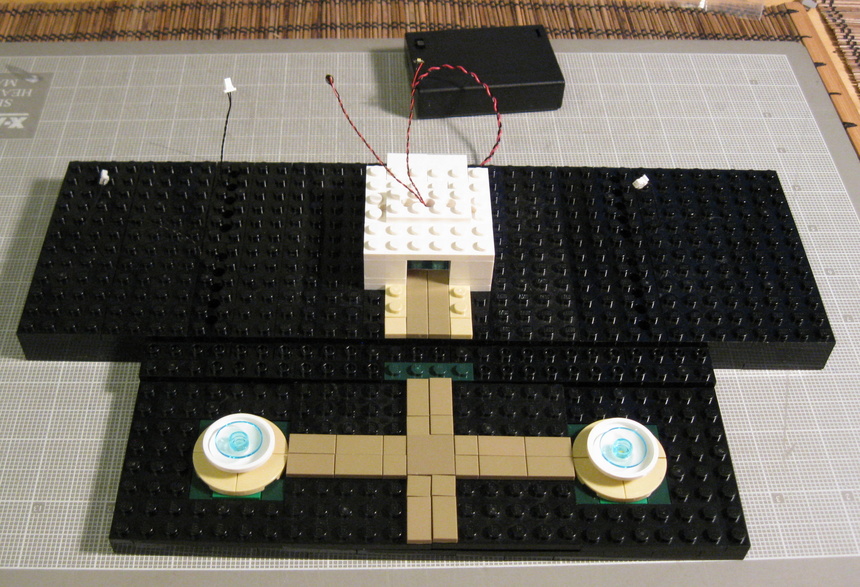 The Pico LED’s extending upward through the center are Brickstuff flickering LED’s. Their destination is to be inside the beautiful, round, blue “atrium.” 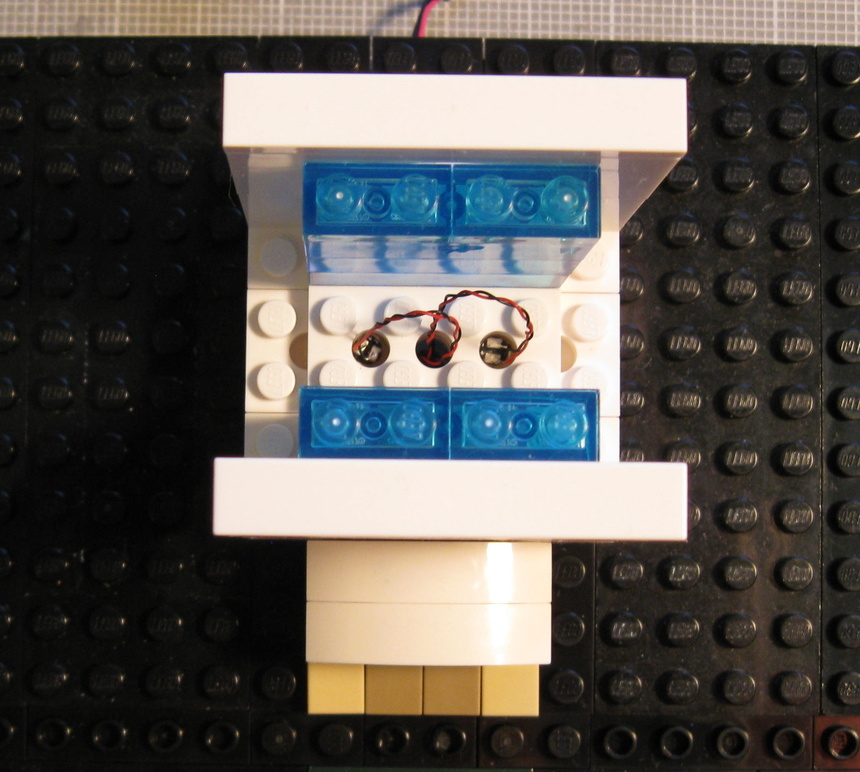 You can see the LED’s turned back into the white Technic plate holes. This was to reduce glare and to direct some light downward to the entrance-way. I treated the blue of the round atrium windows slightly differently than in aegir’s instructions. 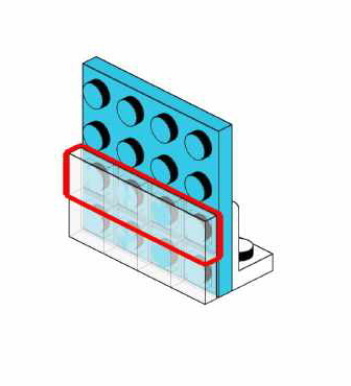 I replaced the non-transparent 4 by 4 blue plates and the clear tiles with trans light blue 3010 1×4 bricks topped by four 1×2 blue plates.

In the East and West “wings,” I used warm white LED strips which were connected to each other in a loop with an extension cable.

The following image from the instructions illustrates the need for two changes I made. 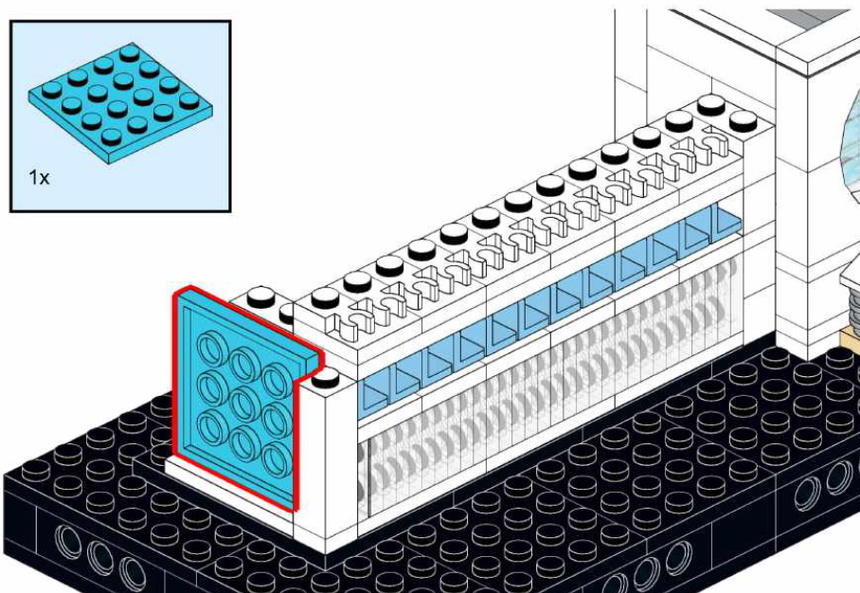 Instead of the solid, azure, 4×4 end plates, I substituted two 2×4 blue Technic bricks through which light could pass. Most of the 1×4, solid white, bricks in the wings were replaced with 1×2 trans clear bricks. 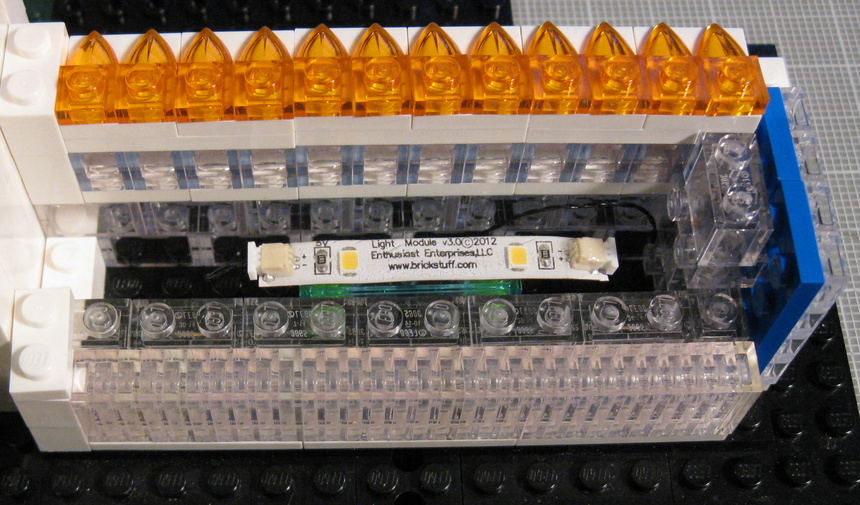 Aegir designed two beautiful fountains. I needed to make some changes to the structures under the fountains—principally by using Technic plates—and to the fountains themselves so that the LED’s could rise up into the bowls of the fountains and shine enough but not too much light upward into the “water.” Using non-transparent, 4740, inverted dishes in sand blue instead of trans light blue made this work. You can see some of these changes in the next photo. 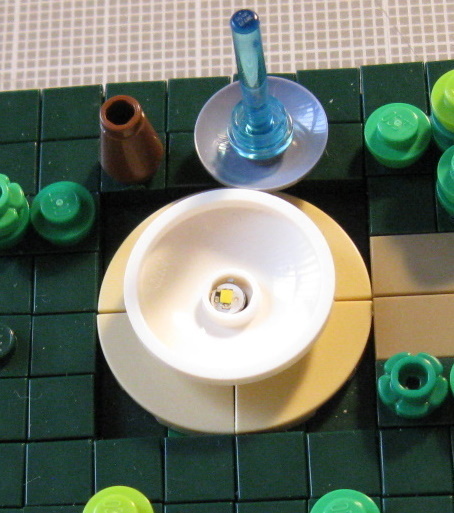 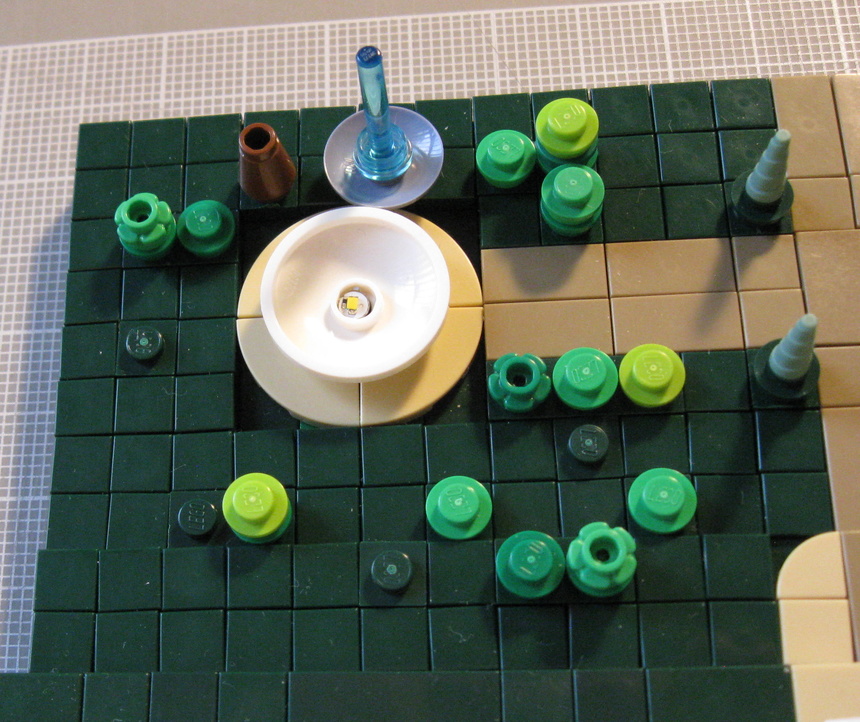 I hope I didn’t toy too much with this great MOC design. As always, I may have over-lighted it. But, the flickering Pico LED’s create a mysterious look in the blue, windowed atrium. Perhaps, a bacchanal with strobing, blue lights over an indoor pool? Meanwhile. some fiendish experiments are going on, Dr. Frankenstein-like, in the two electrically-bright wings? Or, it is all just a very attractive research library. Take your pick. Here are some photos of the results, lit and unlit. You can view more shots in my Google photos gallery here. Included are two brief videos to show the flickering Pico lights doing their thing. 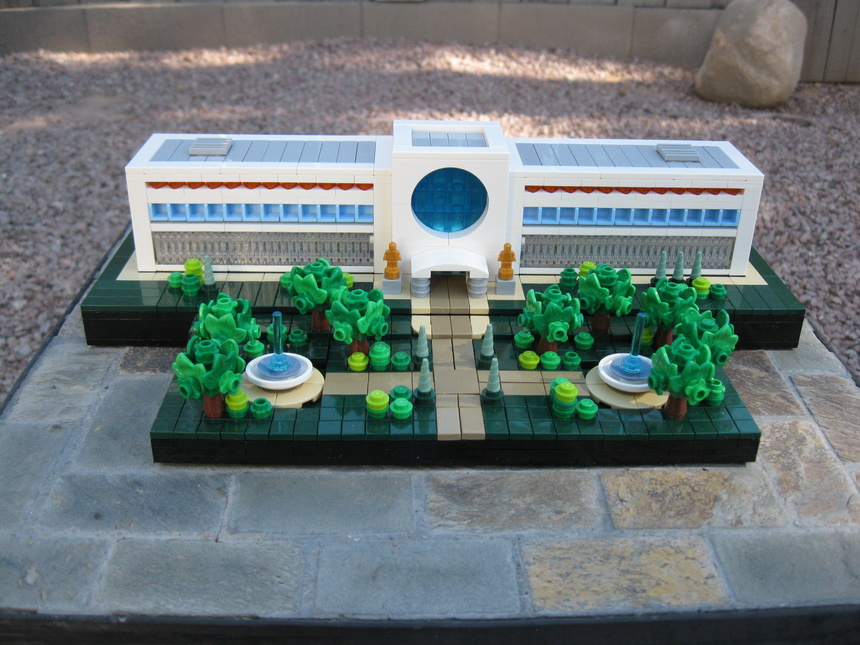 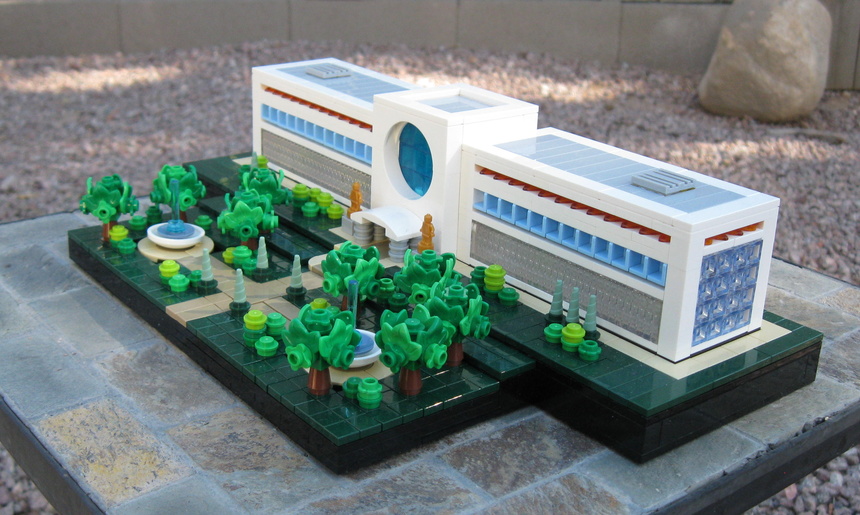 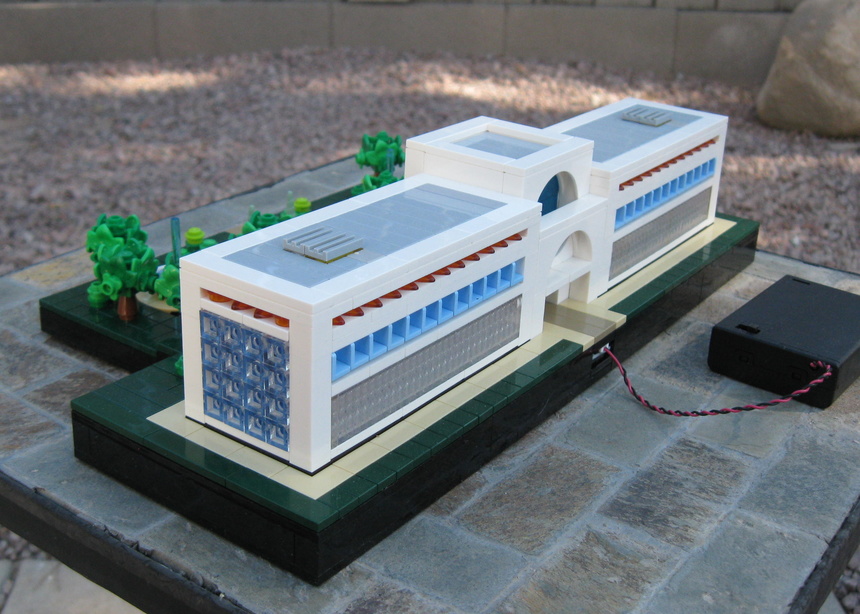 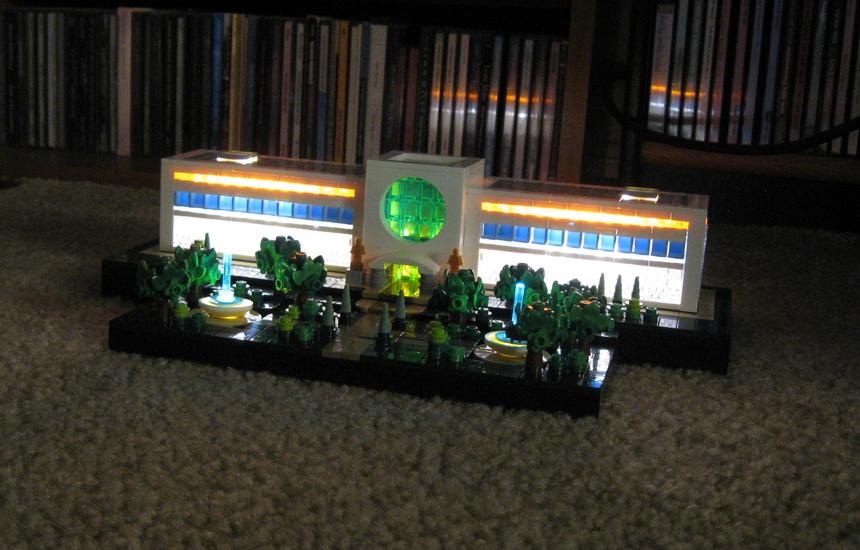 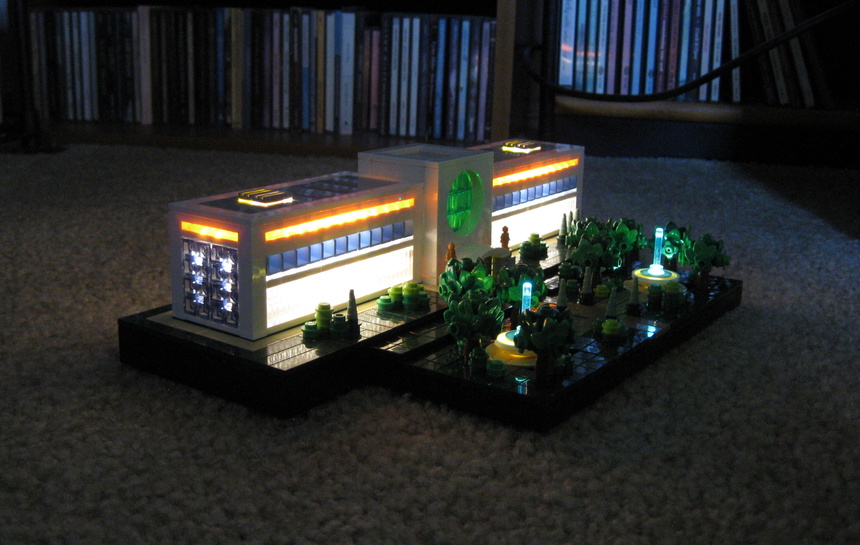 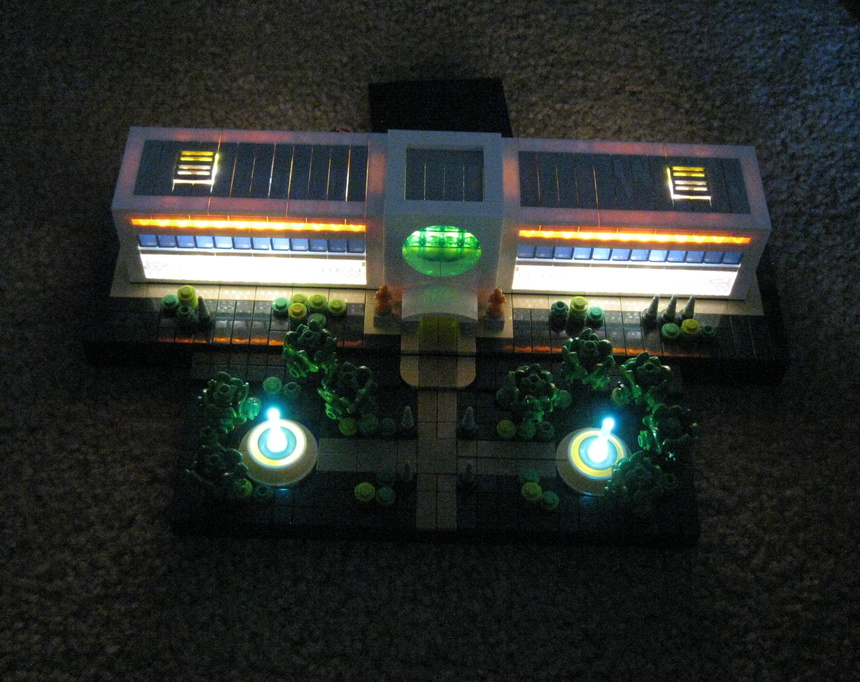