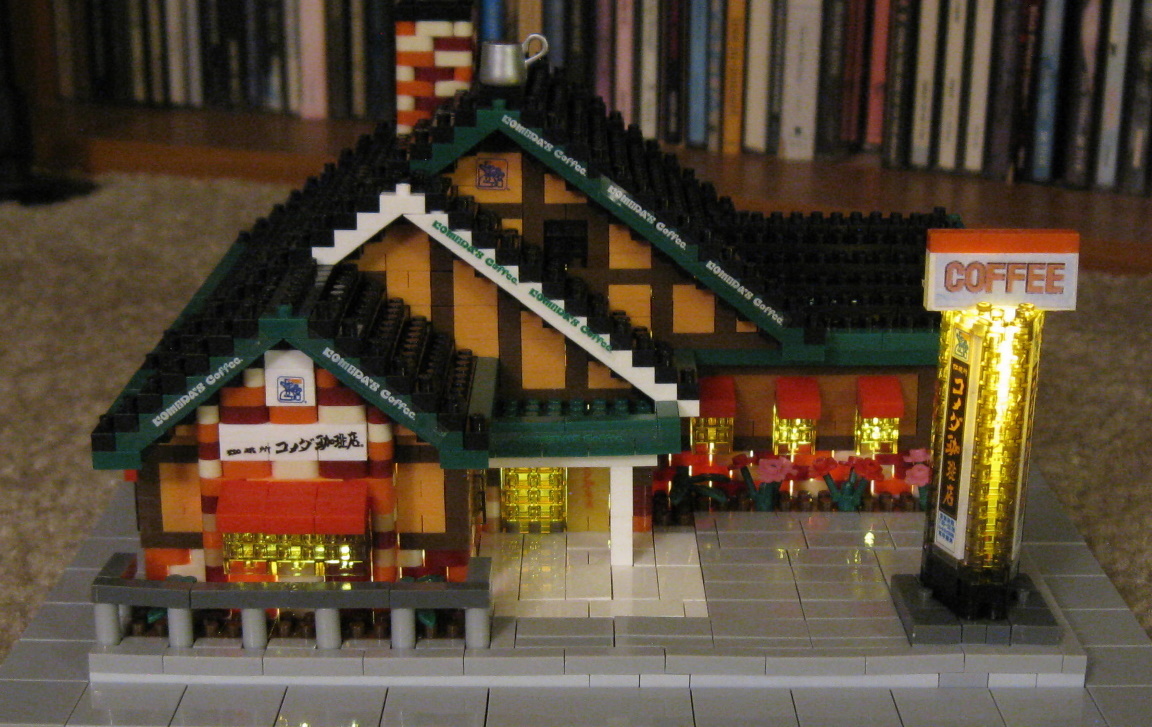 I generally steer away from Lego models, Lego MOCs, and nanoblock models which are commercial tie-ins. But, this 1540+ brick replica of a Japanese coffee chain store struck my fancy with its opportunities for interesting lighting.

Komeda’s Coffee was founded in 1968 and now has over 800+ stores. Here is one which resembles the Kawada model in many respects. 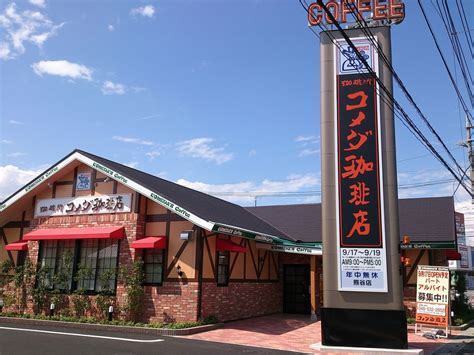 And a lit version of another store: 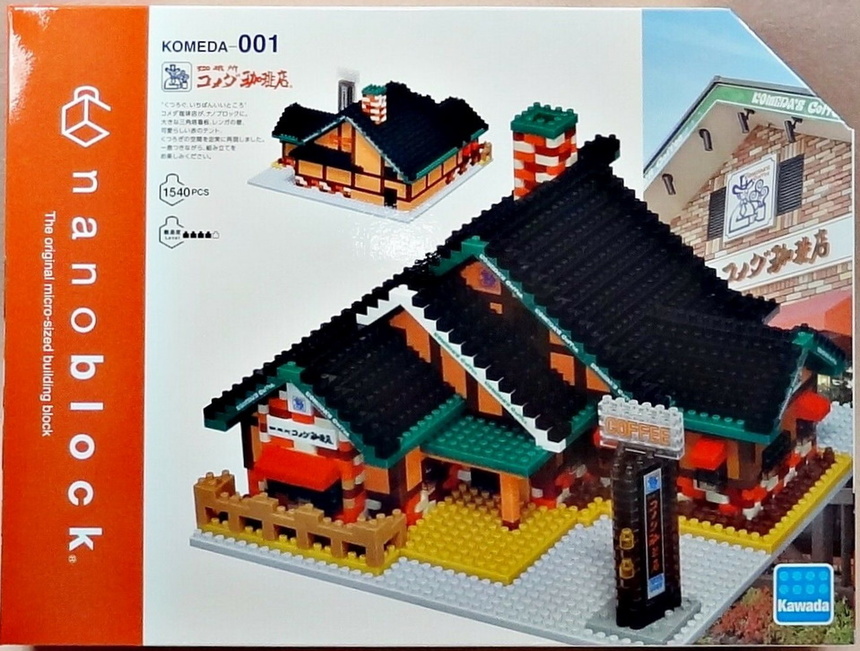 Kawada’s Komeda model has quite a variety of colors... 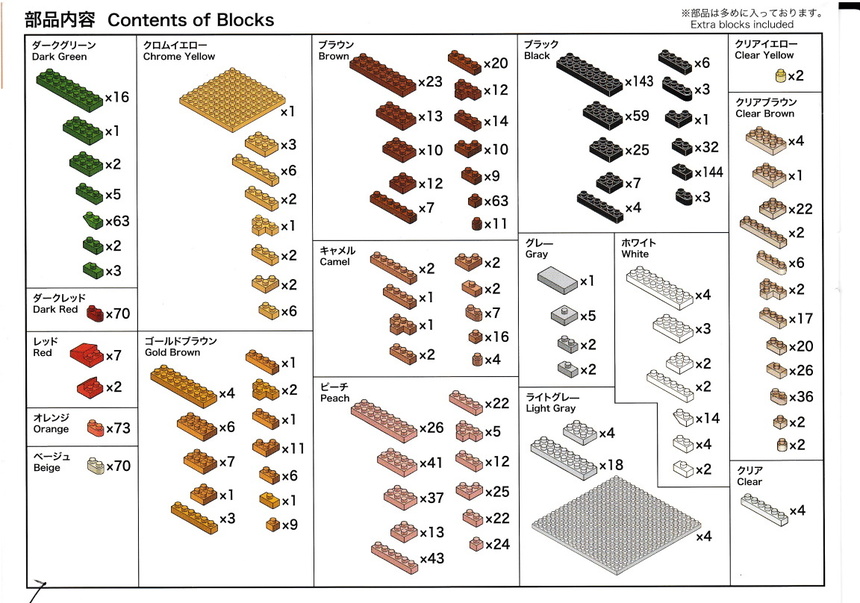 ...and typically complex but excellent instructions. 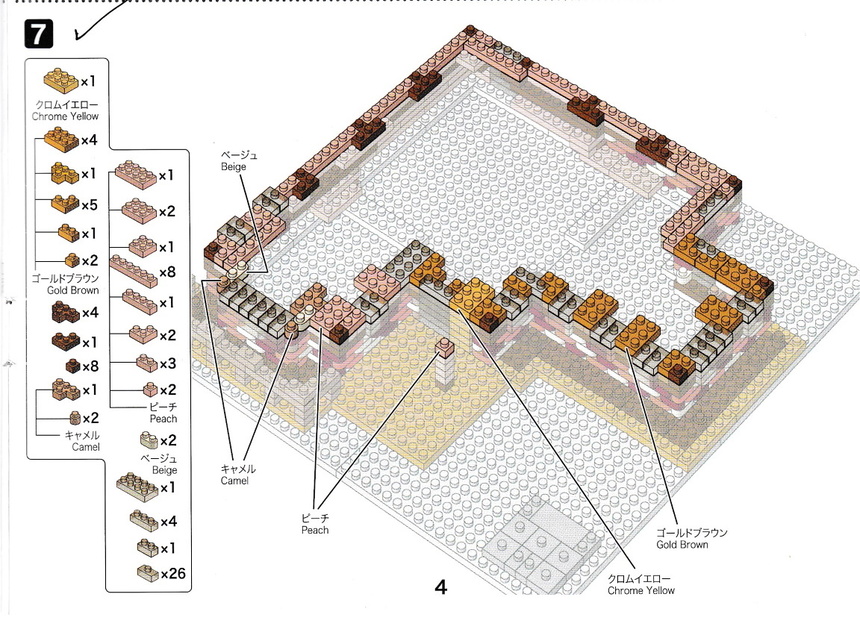 I created two bases: a lower base made from Lego bricks, plates and tiles and an upper base of nanoblock bricks and tiles. This design allows the lighting wires to be sandwiched between the bases when the upper sits on the lower. I created openings in the nanoblock base through which wires could be strung. The original Kawada base is about 6 1/4 inches square. The Lego lower base is about 7 ½ inches square. 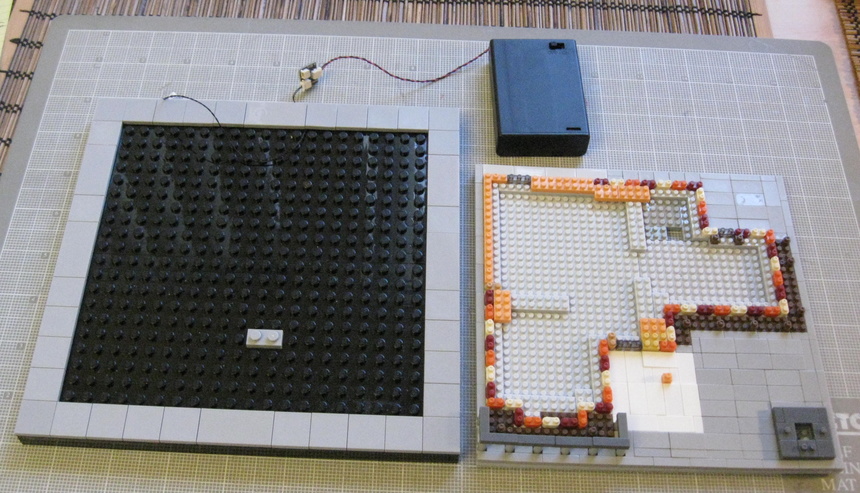 To light the Komeda building and the advertising tower out front, I used the following Brickstuff supplies: 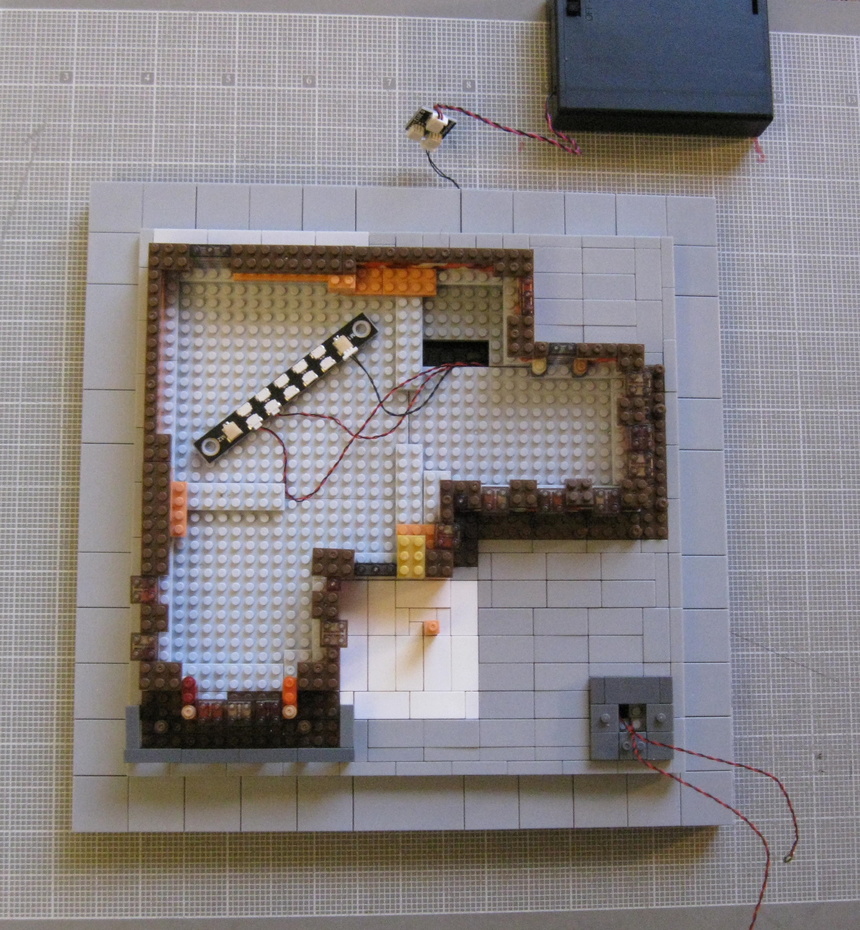 Building upwards on each side of the main building required that I monitor where doors and windows would reside. I had to make sure no bricks blocked light coming out. To do so, in some cases I substituted transparent nanoblocks. Note the red arrows. 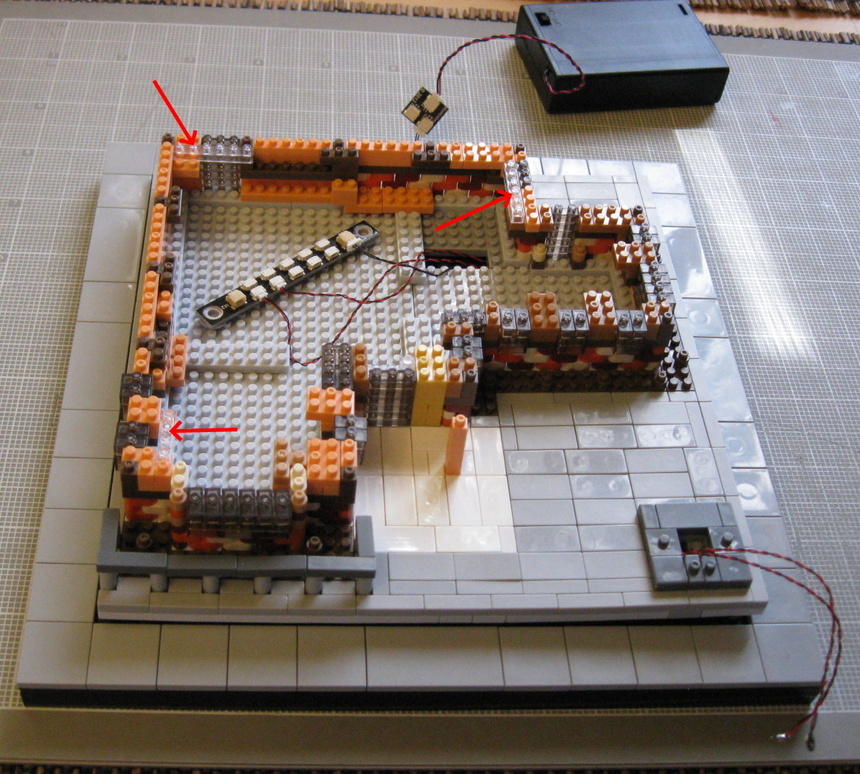 I decided to create four small towers of transparent bricks to support LED’s sitting on top. Note the arrows. Lifting these lights higher up in the building would, I hope, spread the light around. 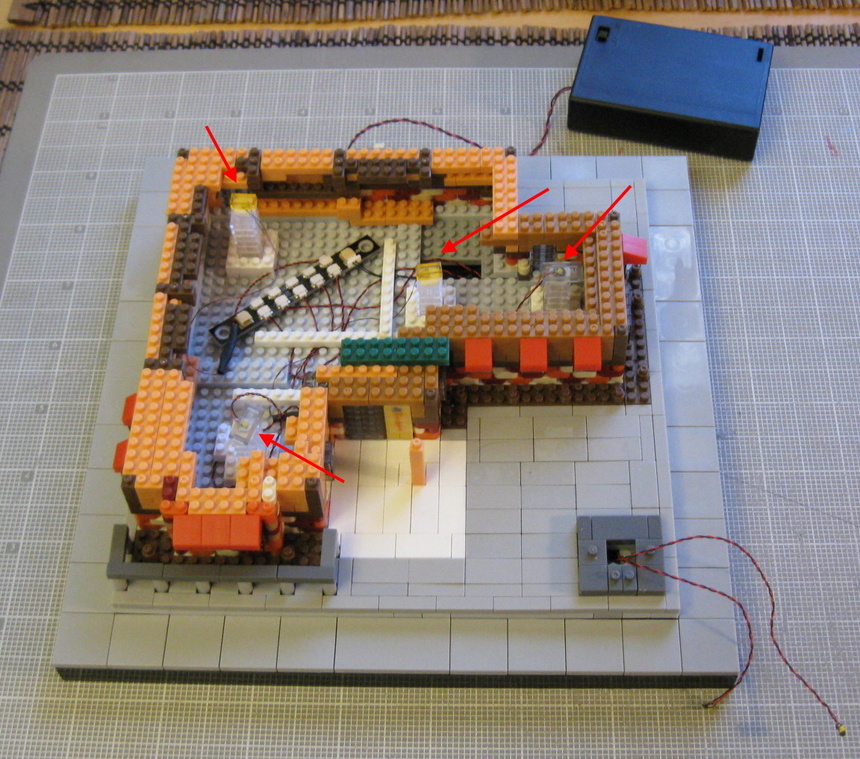 I knew I would place two flickering Pico LED’s up inside the tower. Originally, I inserted the LED’s all the way into the "coffee" sign atop the tower.

The two Brickstuff flickering LED’s completely overpowered the writing on both sides of the sign. I experimented with different and darker colored bricks for the sign but nothing helped. Finally, I realized that the lights had to be in the tower not in the sign. You can see in this out-of-focus (Sorry!) shot that I ended up with the flickering LED’s about two-thirds of the way up the tower and held there by sticky pads. 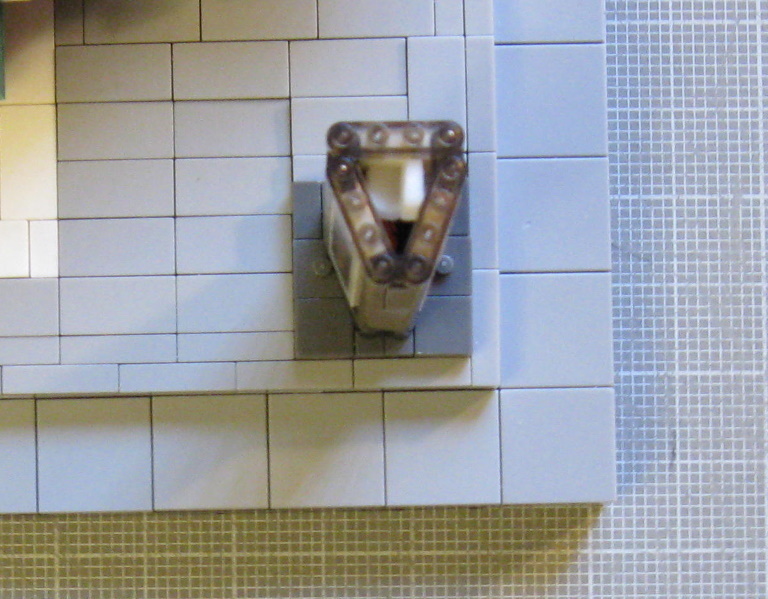 DECALS AND OTHER MISTAKES

I am the world’s worst applier of decals. I can NEVER get them straight. Too bad since Kawada provided quite a few decals closely resembling the outdoor signage in the real Komeda buildings.

This sample from the model’s instructions shows how the decals should be applied.

I’ll let you “study” my final photographs to see how many of the decals I applied are crooked.

This little sample above illustrates another challenge. Notice the 1x2 rounded bricks. They are used in several colors all over the model. A nice effect. But, light easily escapes between the rounded ends. This was another reason why I lifted up the interior lights hoping to avoid too much light escaping between these rounded ends.

Kawada even designed a decal for the rather cute chimney. 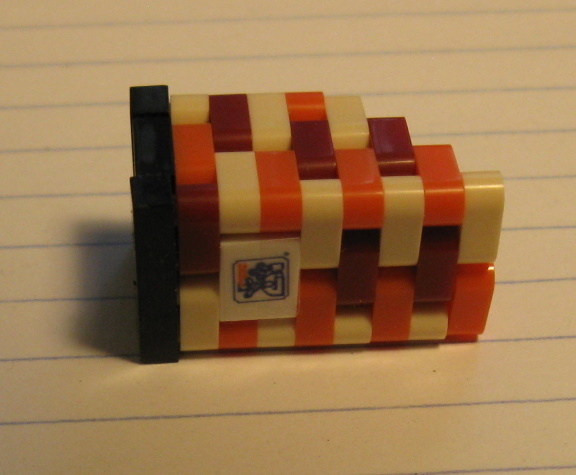 One other mistake I made was to miss a window on the upper floor. Notice the arrow pointing to the unlit window—even thought the lights are turned on in this shot. I simply missed this window until it was much too late to make the many structural changes necessary to allow light to travel up and out this upper window. 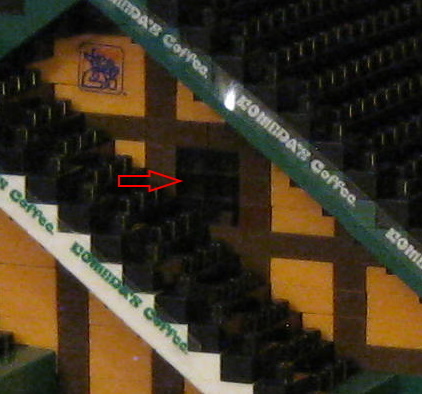 This small model from Kawada (with over 1540 nanoblock bricks plus extra Lego bricks for the sub-base) turned out better than I imagined it would. Placing the Pico, mini, and flickering LED’s in the correct spots was a challenge which necessitated substituting transparent nanoblocks for solid ones. I was even inspired enough to add some greenery and flowers and to try to produce a better-looking fence out front. I added some green tiles around the roof edges to replace the studded bricks. Silliest of all was my decision to “crown” the building with an official, very small, Komeda Coffee souvenir mug. 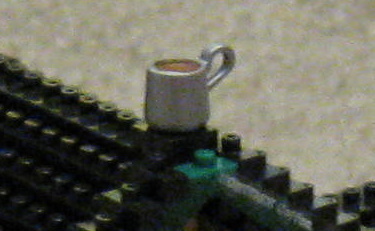 My full Google Photos album for the Kawada Komeda Coffee model can be viewed here. This album includes some build photographs and a short video of the building when lit...and flickering. ;-)

Here are a few photos. 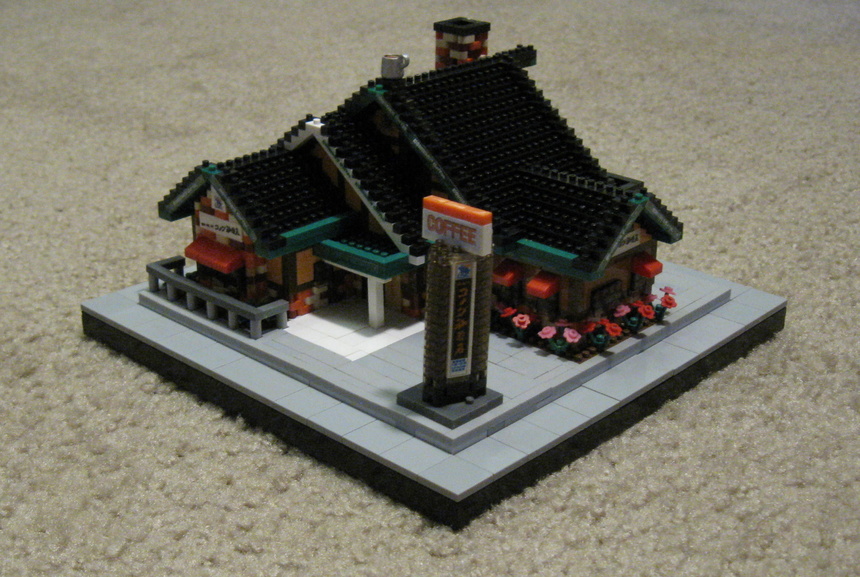 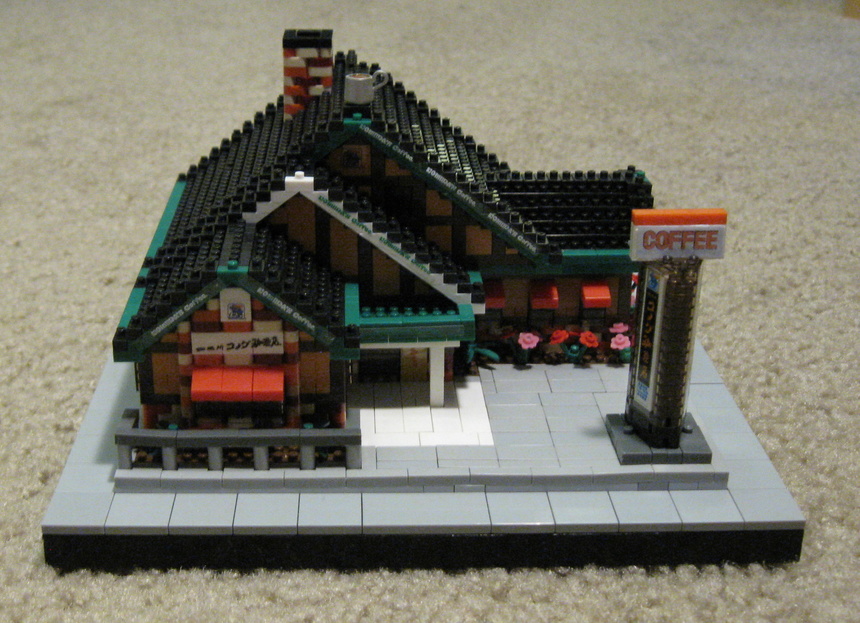 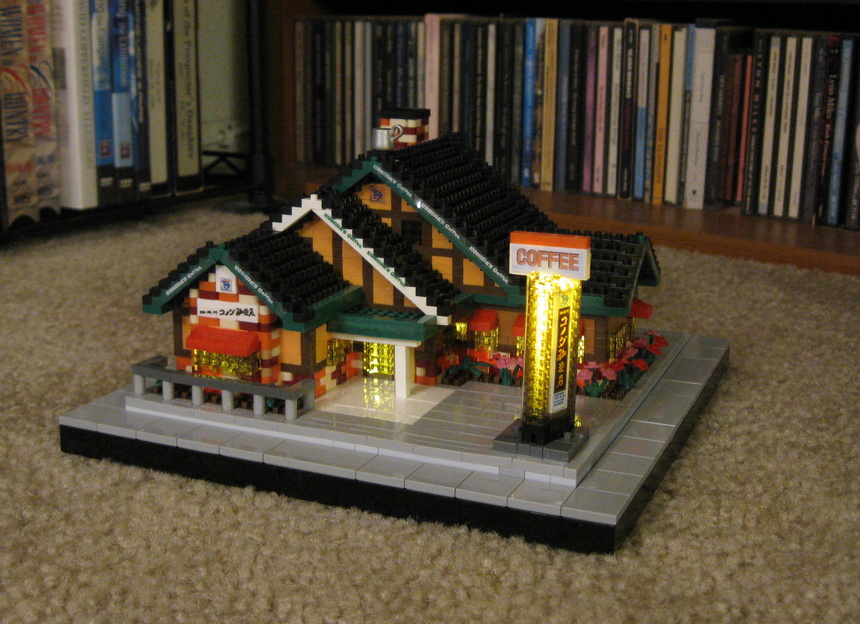 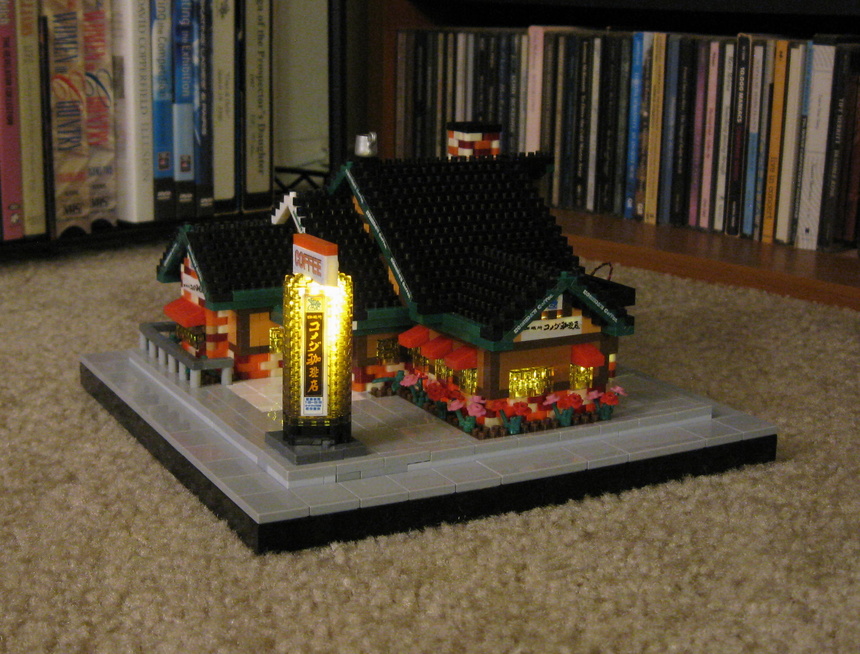