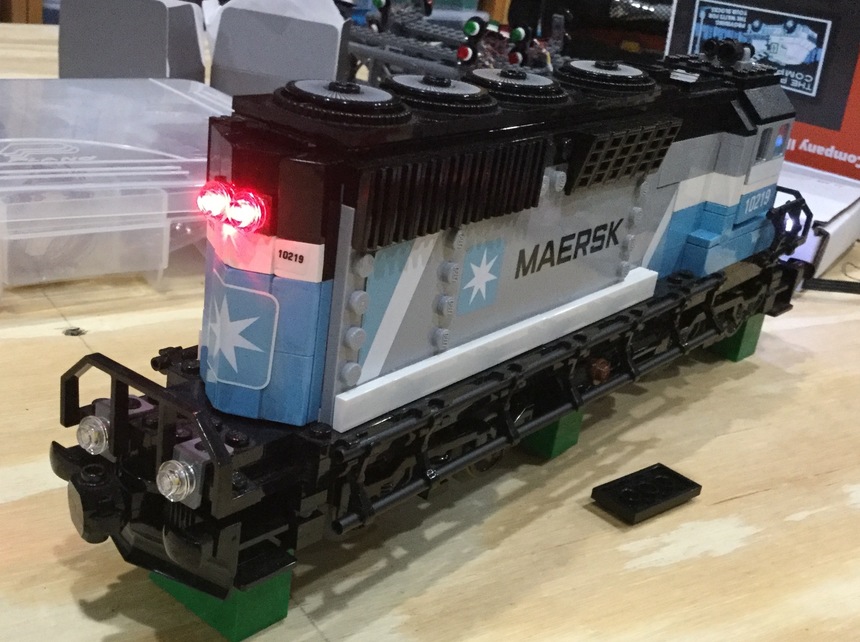 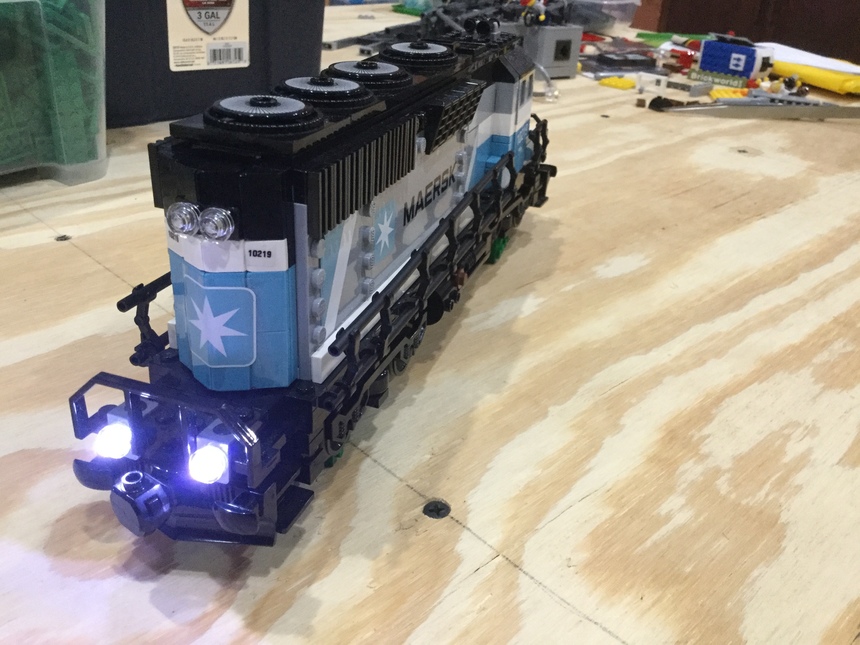 Take the 4 angle brackets holding the ditch lights and drill a 7/64in (3mm) hole through the open stud.  Thread a cool white pico LED through the resultant hole and cover with the trans clear 1 x 1 round plate.

Take the 2 x 3 Plate and drill a 3/16in (5mm) hole, also starting from the back.  Use the tubes in the back to center the hole.  You are going to make what should look like a 2 x 3 Technics Plate (if one existed).

Take the 1 x 2 plate assembly with the cool white LEDs and run the wires through the 2 x 3 Tecnhics plate. 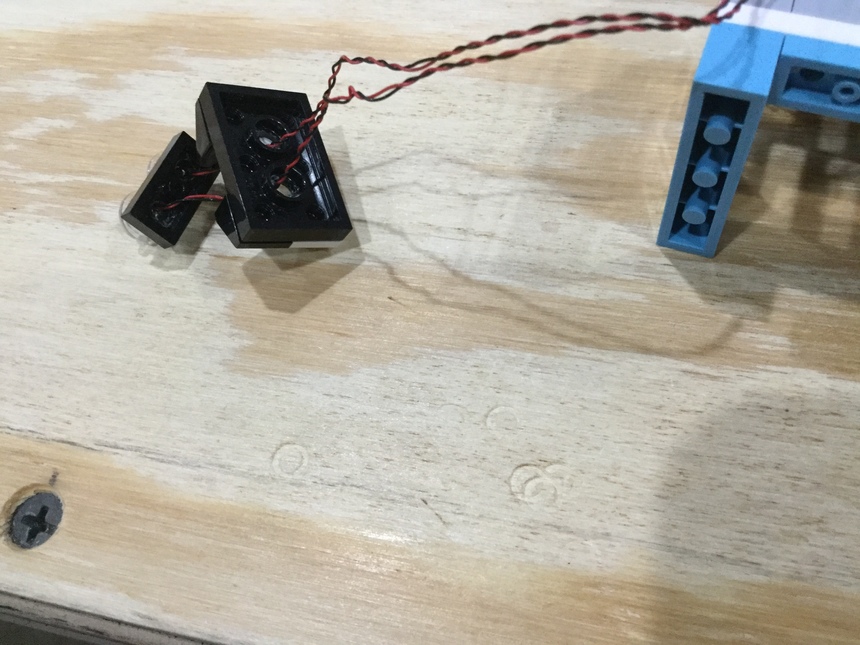 Then run the wires through the 1 x 2 Brick with studs on 2 sides, having the connectors inside the cab. 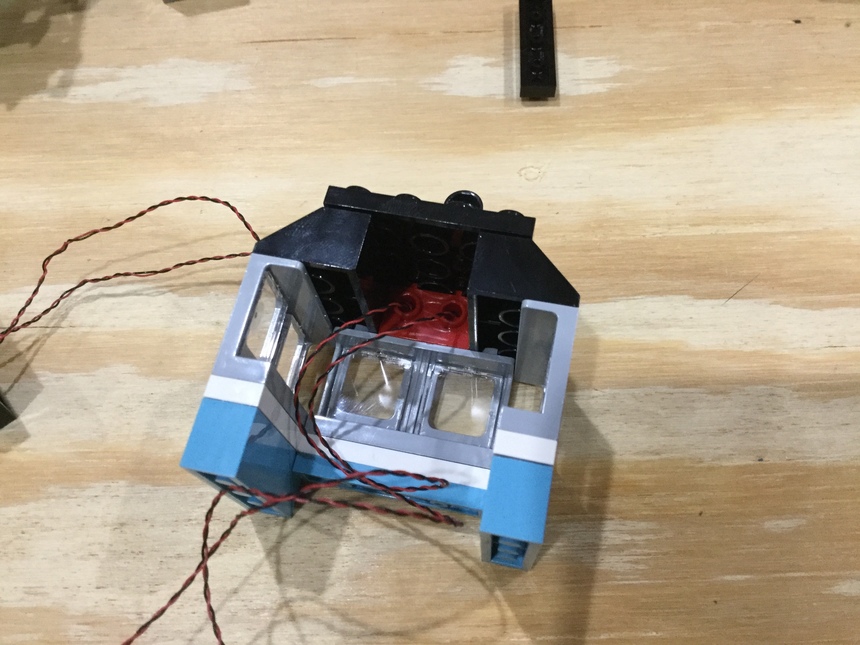 Run the wires through the back wall just below the 2 x 3 inverted slope.  I have removed a  1 x 2 brick to allow the cable to move as I take off the cab or put it back on.

Take the rear assembly and replace the 2 x 6 plates with the 2 2 x 6 Technics plates.  Then take the other 1 x 2 plate assmblly (the red LED one) and feed the wires through the same technics hole. 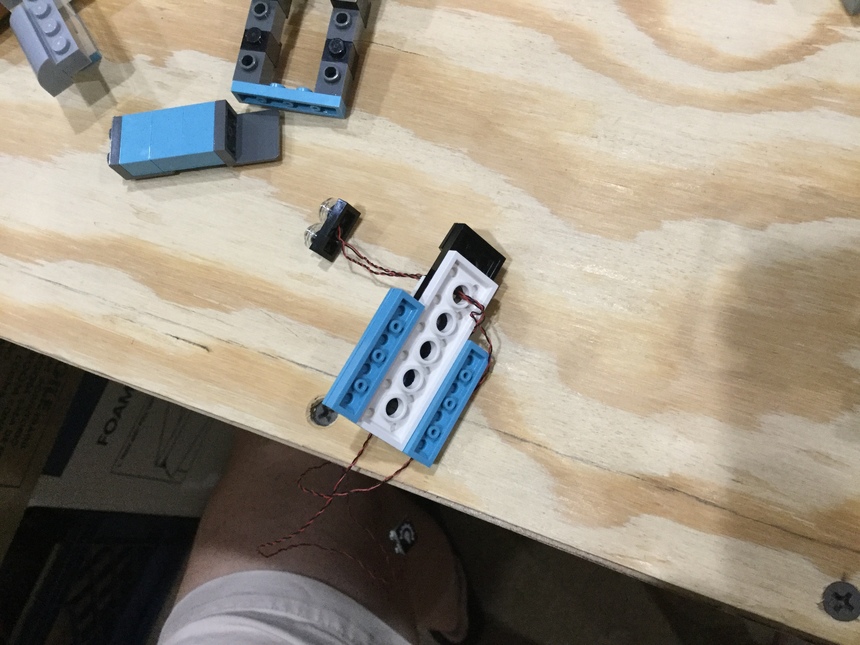 Then put the bracket/ 1 x 2 brick assembly pushing the wires against the back of the white technics plate so it comes out on the bottom. 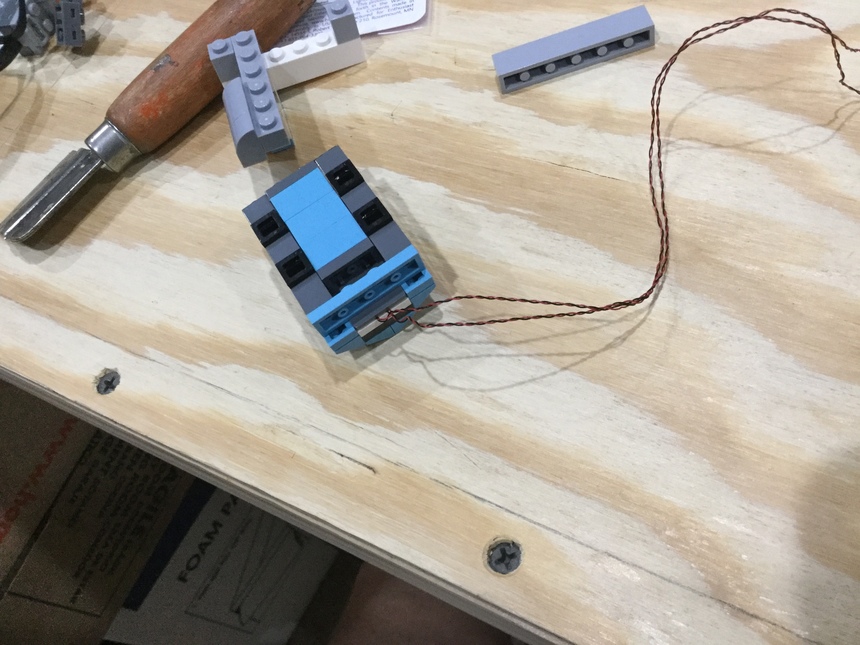 Then run the wires under the battery and IR receiver. 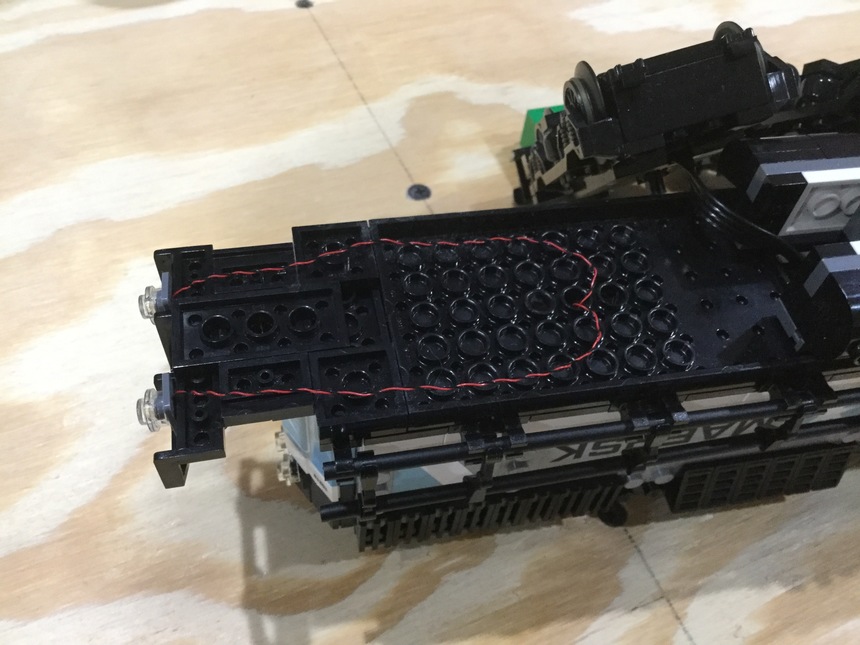 Replace the 2 other brackets and run the wires under the battery and IR receiver. 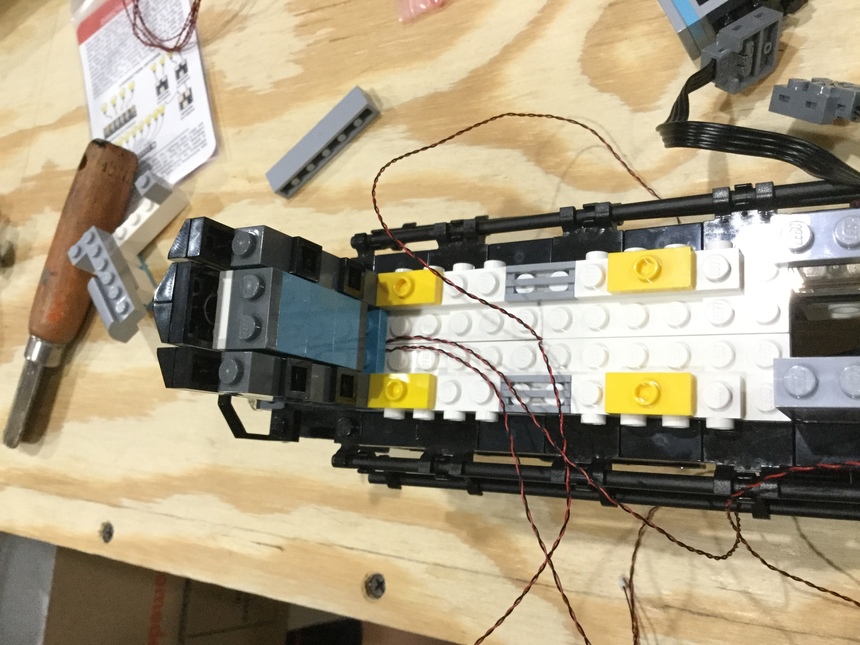 Attach LEDS to one of the 1:2 Pico adapter to mark these wires are the rear ditch lights.

Take the 2 other bracket assemblies and put them on the front of the train base.  Feed the wires through the centermost hole and it should be a clean shot into the inside of the model. 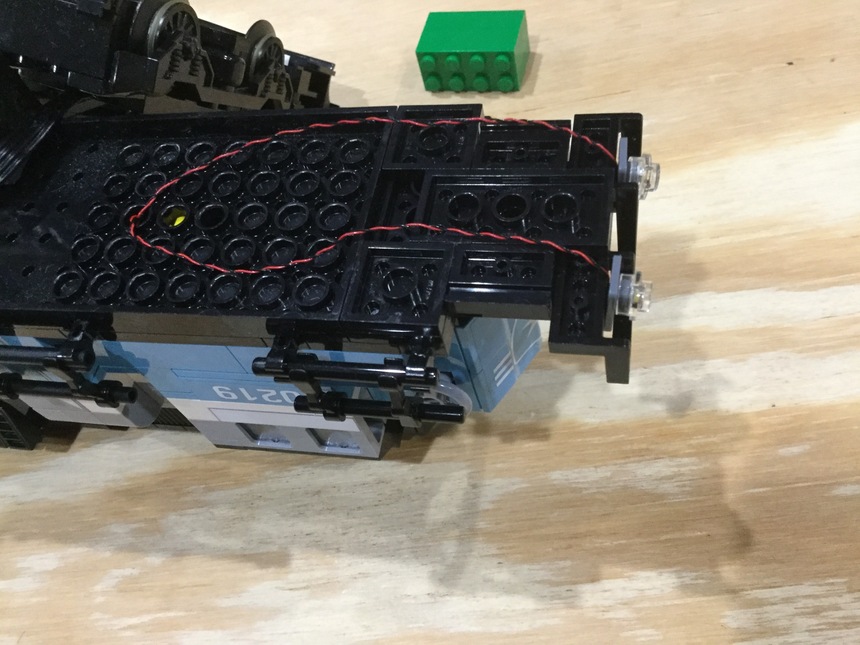 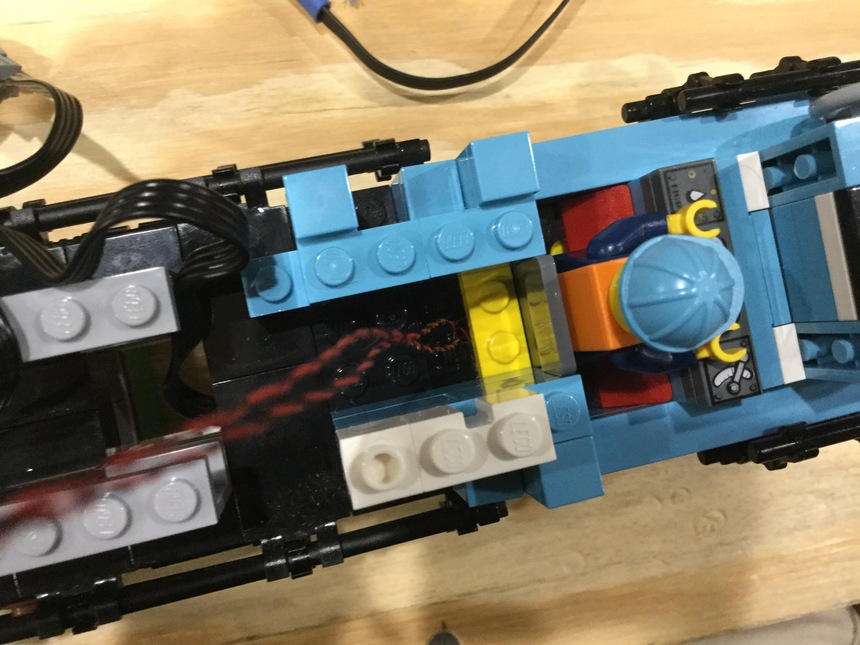 Take the 4-Port Expansion Adapter and plugin the 2 cab lights and the 2 front ditch lights.  Then take one of the 1.5" cables and attach the unused 1:2 Pico adapter.  To that adapter, plugin the red LED cables from the rear.  Then take another 1.5" cable and plug into the one open plug on the 4 port adapter and the other end should be plugged into output 1 of the Power function adapter board.

Take the last 1.5" cable and plugin the other 1:2 Pico adapter cable and the other end into output 2 of the Power Functions adapter. 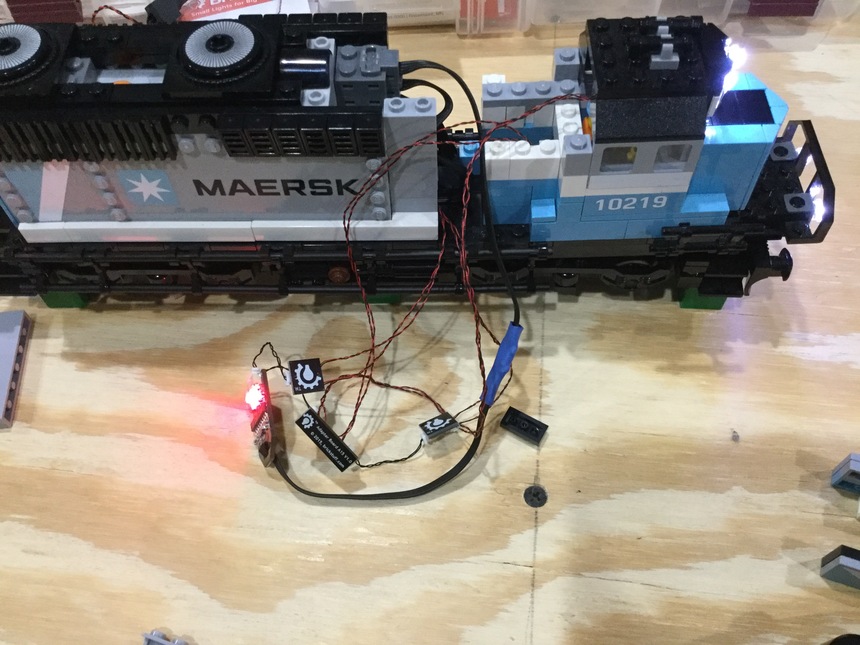 Lastly plug the Power functions adapter on top of the power motor on the IR Receiver.  If you have 2 motors plugged in there, you will need to trim off part of the 1 x 2 x 3 Wall panel. 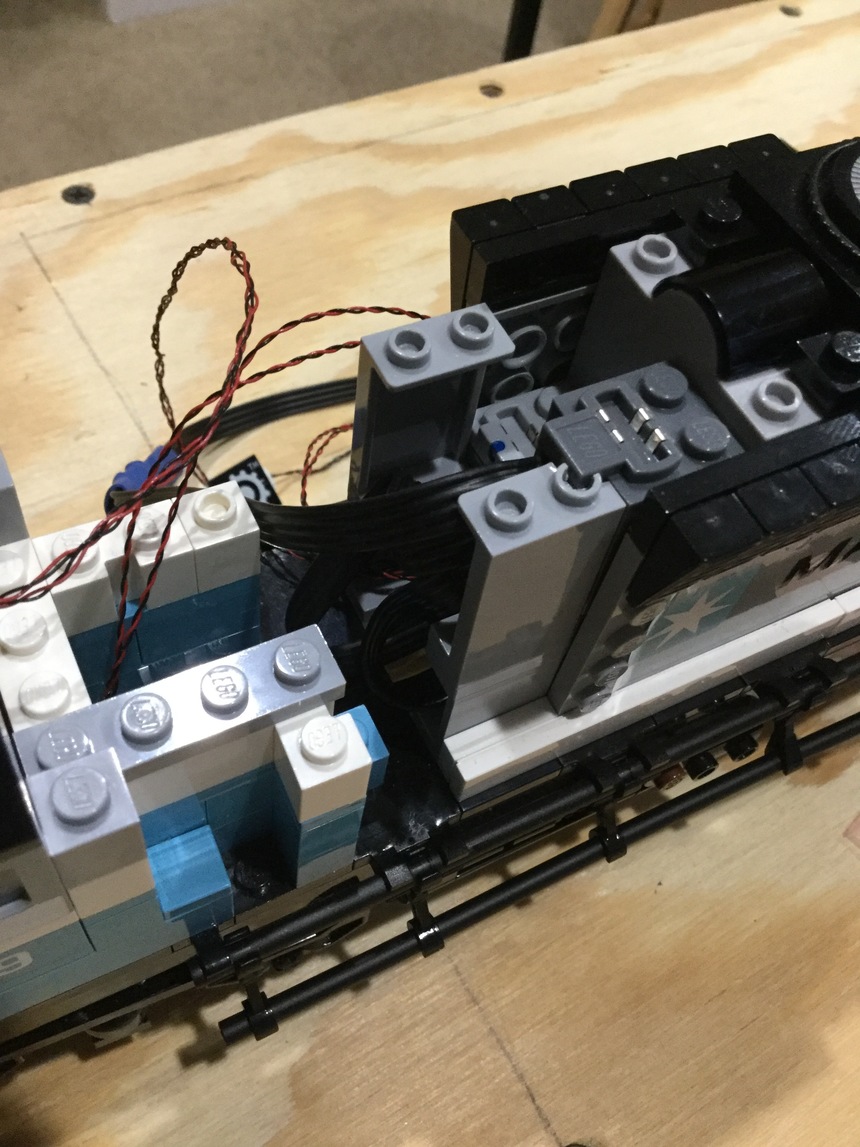 You will also have to remove the 2 x 4 Black Technic plate that is holding on the fan assembly.