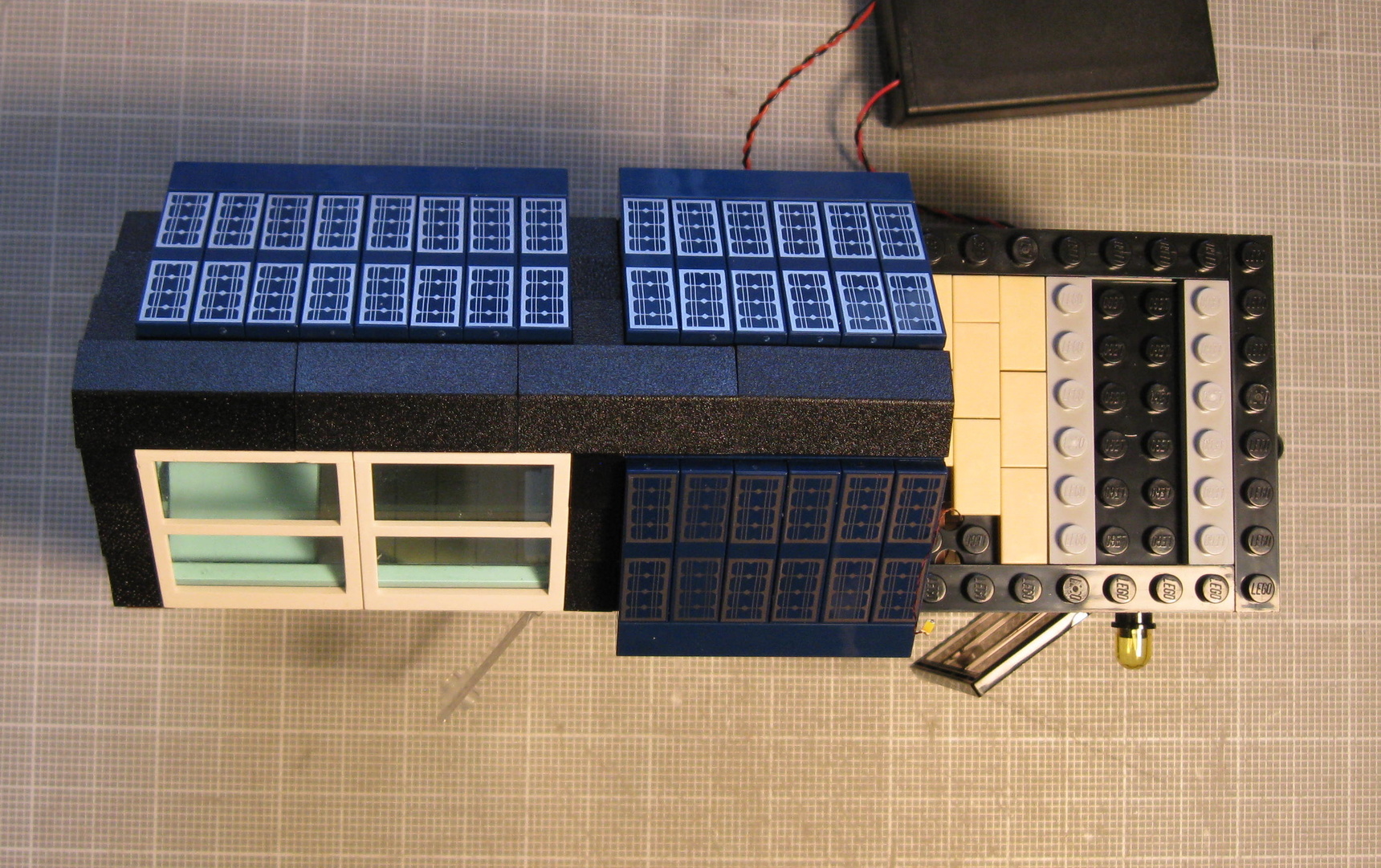 John_Brickmold at Rebrickable seems to have made a specialty of tiny houses on wheels. See his fine work here. When I saw the photographs of his Tiny House on Wheels 1 here, I was smitten. I immediately began to consider how to light the MOC and what alterations might need to be made. Working on the scale of this MOC made me realize what doll house designers face. The amount of sheer detail John has worked into a model 9 inches by 3 inches and consisting of 700+ bricks is simply astonishing. I admit to catching a bit of Lego “ad libbing” fever when building this MOC which caused me to pursue a number of alternative bricks and colors.

Studying John’s fine instructional PDF led me to plan for 12 mini-LED Brickstuff lights. Bunch 1 of 5 LED’s would illuminate the rear stoplights and outdoor light next to the main entrance door. Bunch 2 of 7 LED’s would occupy five spots for lights John already built on the inside walls of the tiny house plus one LED to shine down above the computer station plus one LED to light the upstairs sleeping quarters. It turns out I could have used one more LED to light the amazingly detailed shower/bathroom area. C'est la vie. Rob of Brickstuff did his usual superb job of producing the two bunches of LED lights at the lengths I specified: 5 with 6 inch wires and 7 with 8 inch wires. For simplicity sake, I decided to use two switches: the coin cell battery pack for the smaller bunch and the 3XAA battery pack for the larger. As you can see, I connected these LED’s and battery packs with two 1:2 expansion adapters. 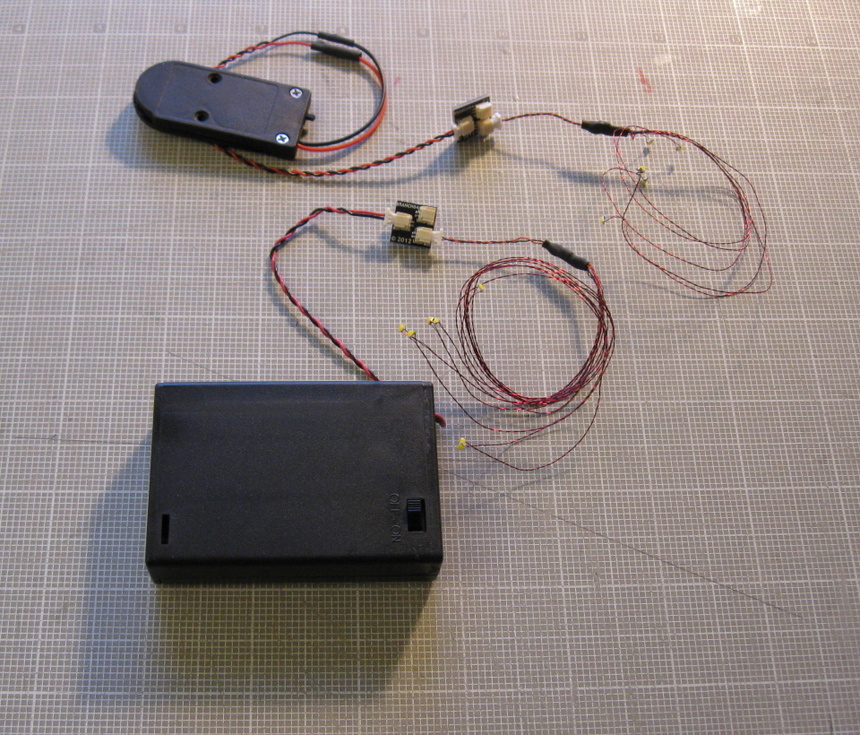 Here are some of the locations which immediately beckoned me for lights. 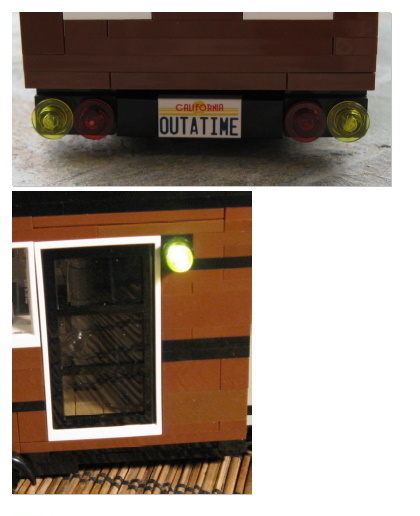 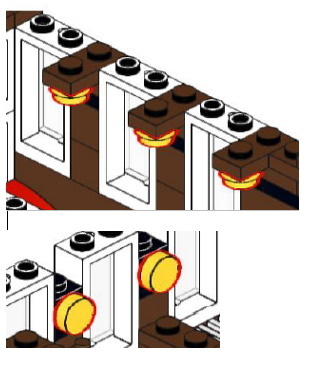 Building this detailed model from the ground up, literally, required the thin wires of the LED’s to be snaked upwards from the bottom of the chassis to approximately the right positions at each stage of the build. Some alternative bricks were used or bricks were left out to allow room for this to work. Here are a few shots of the build progressing. 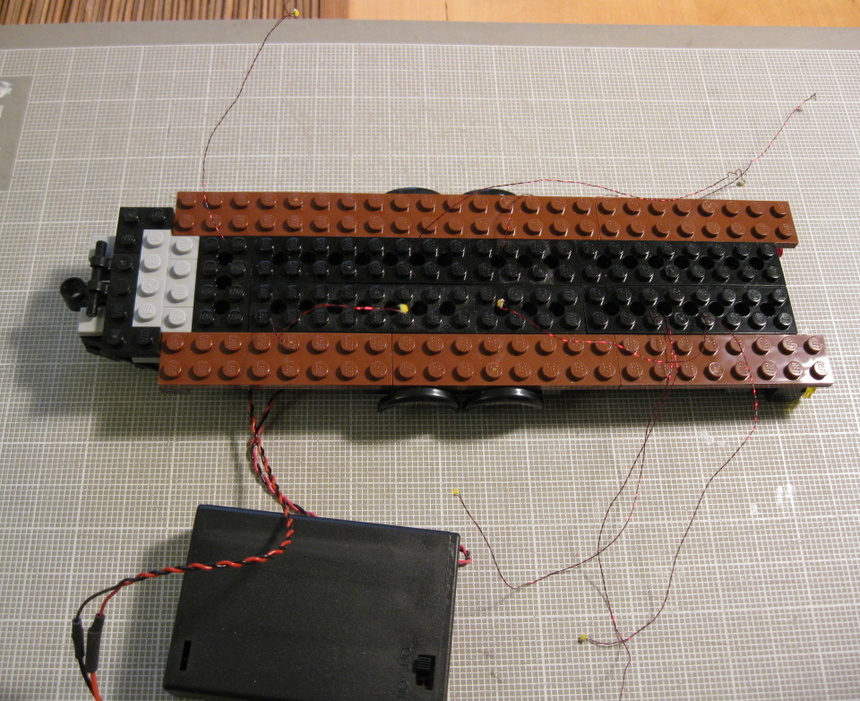 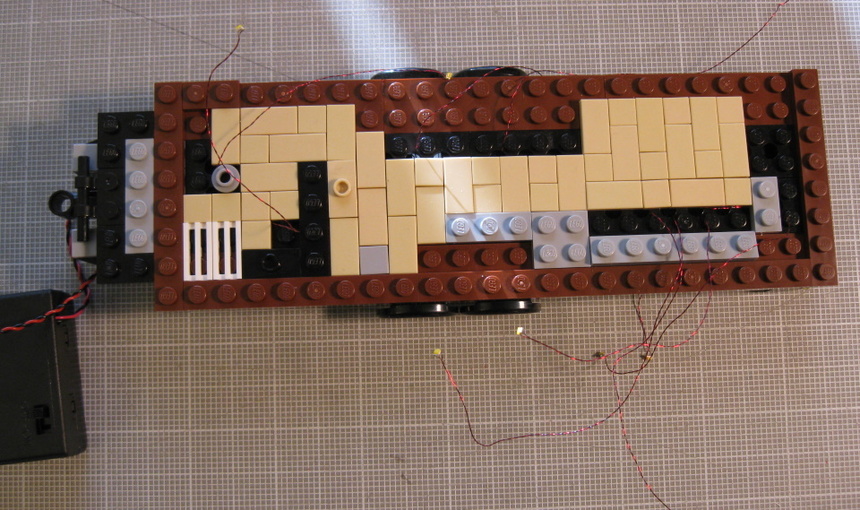 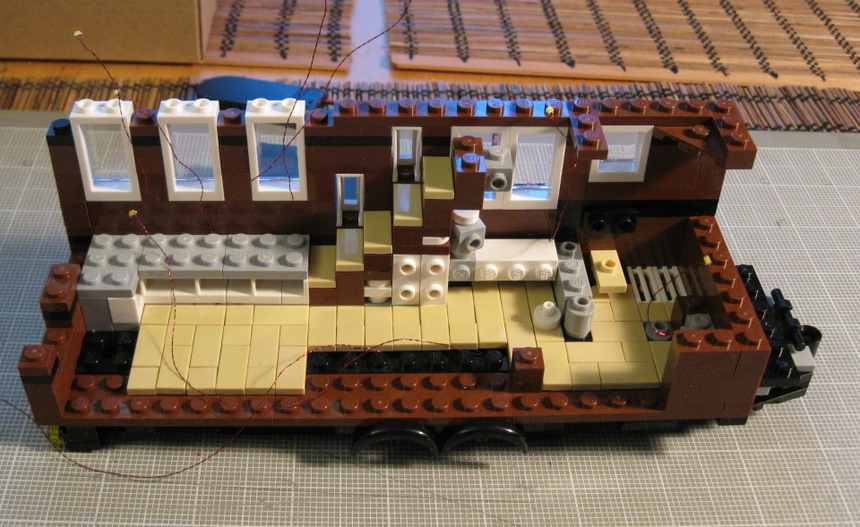 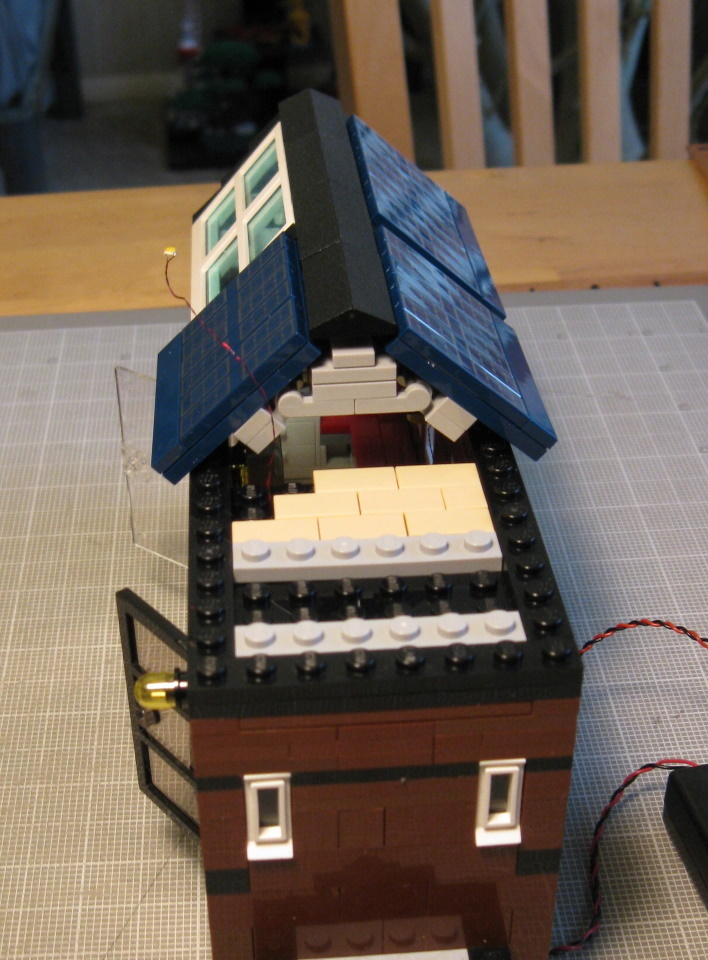 The “dark side” of using twelve LED mini-lights is the “mare’s nest” underneath the chassis. I was able to control it a bit by adding some cross bricks.

John’s eye for detail and ability to squeeze lots of features into small spaces amazed me throughout the building process. 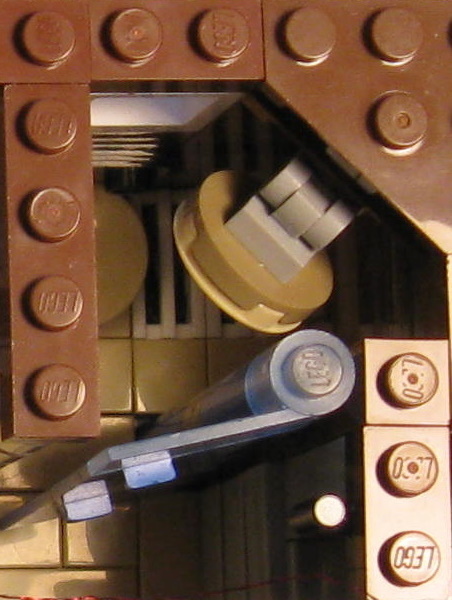 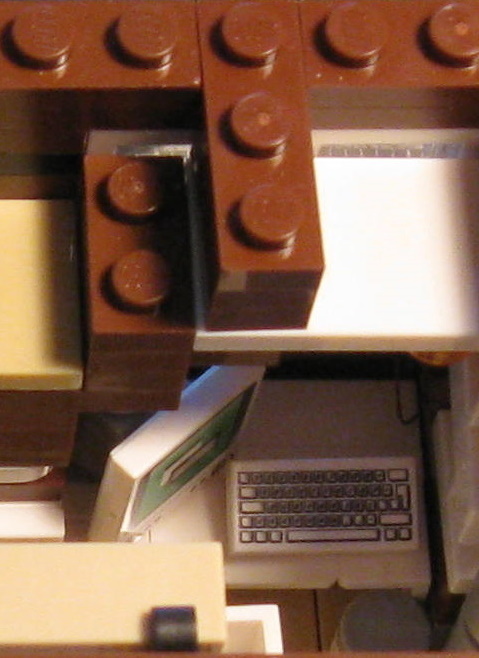 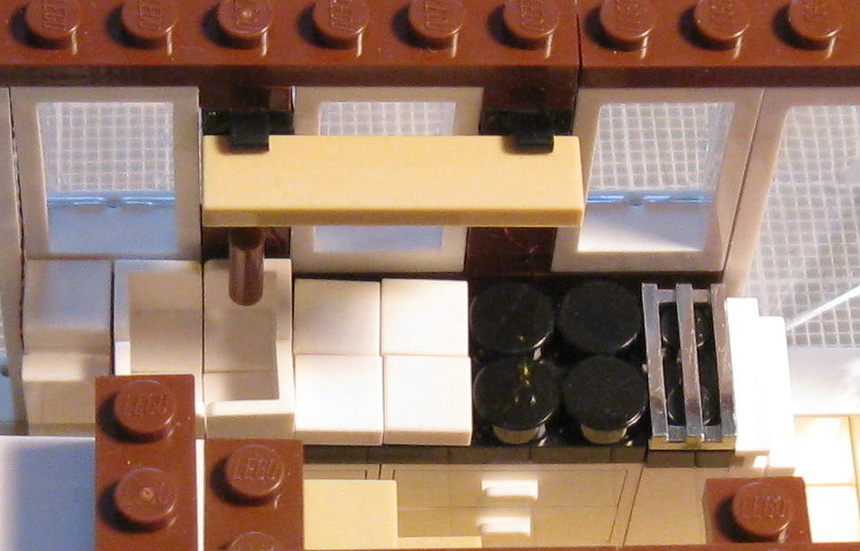 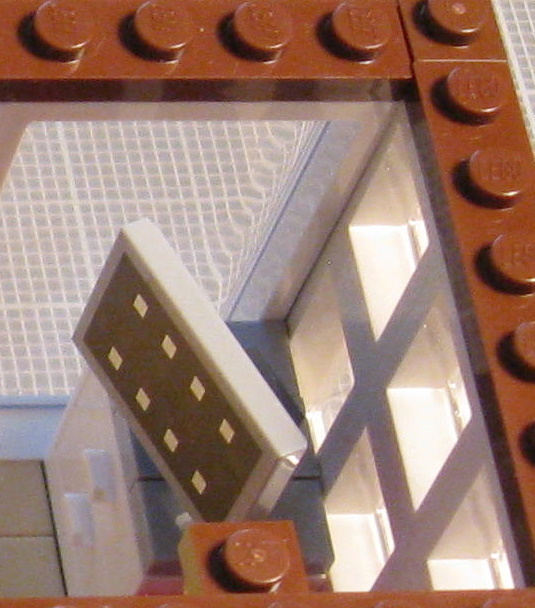 There are lots of other details worked into the design—not all of which I’ve identified as to function. I did use a number of alternative bricks and tiles for some of these spots. 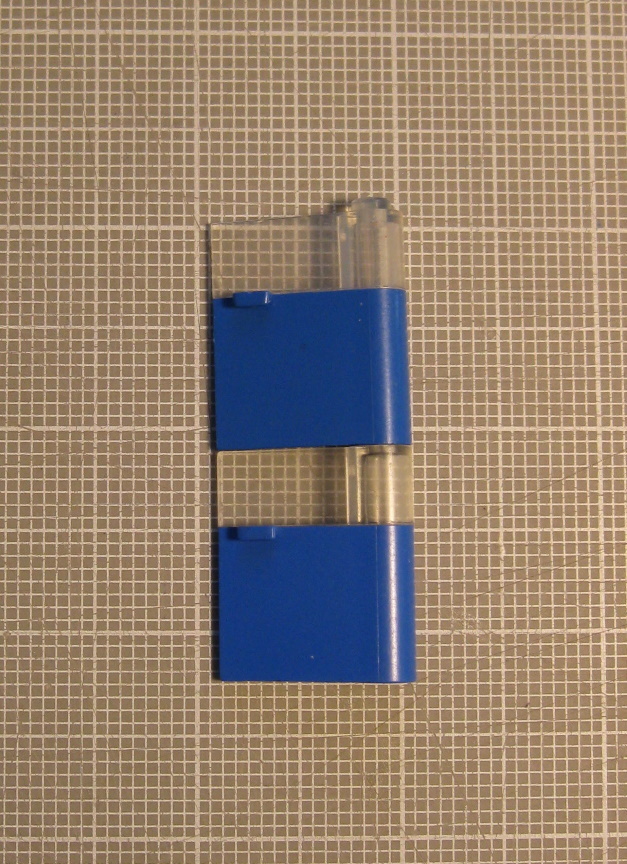 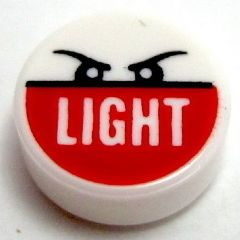 This “light” is a cover for the LED in the upstairs bedroom. 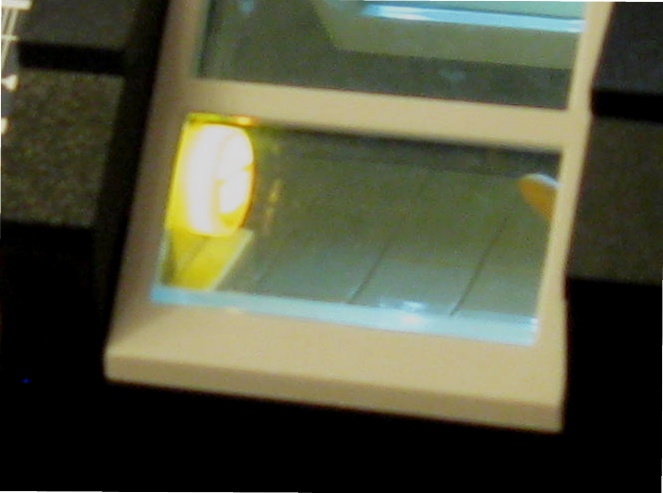 John’s original design had more roof sections with solar panels. I decided to reduce the number of panels and add in additional roof windows. I also added the vase of flowers on top of the amazingly designed housing for two fuel tanks. Sorry this photo is out of focus. 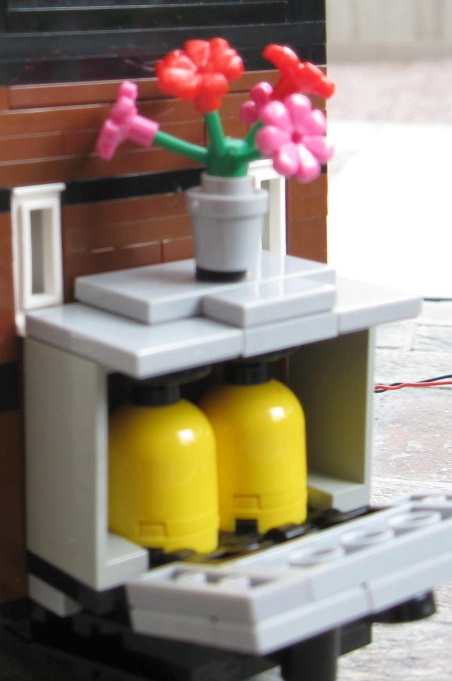 I tried a number of Lego pieces for the light next to the front door. I ended up using #4773 for the LED cover.

Here are a few shots of the final model, unlighted and lighted. You can view more, including build photographs here.  Thanks, as always, to Rob of Brickstuff and to john_brickmold for his help and feedback. I apologize for how many of the lighted shots are not quite in focus. My bad.  By the way, there are two non-human inhabitants of the Tiny House.  Keep an eye out.  ;-) 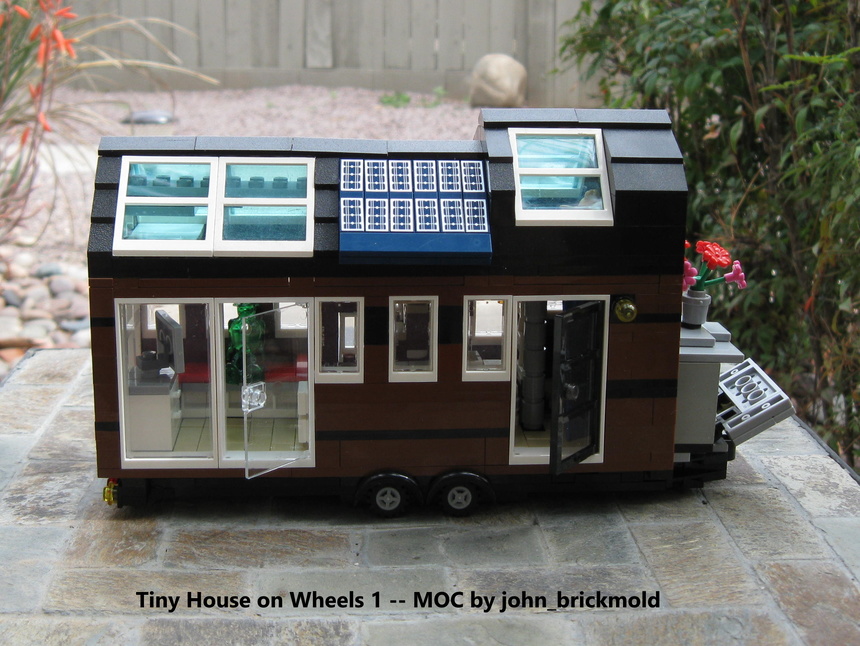 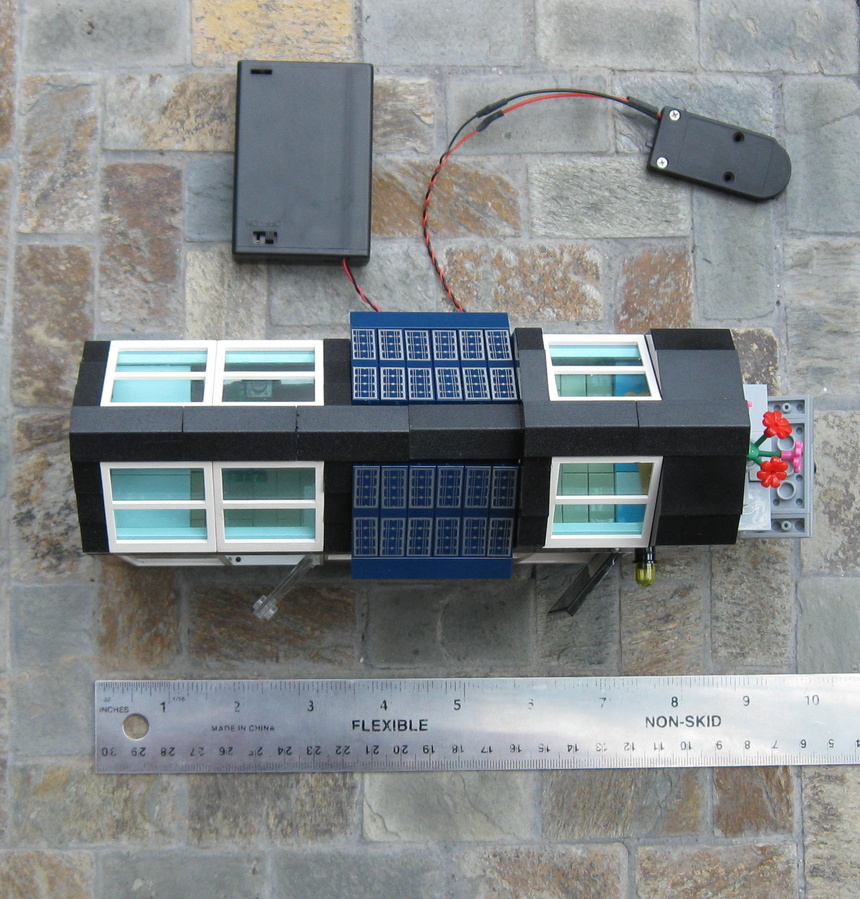 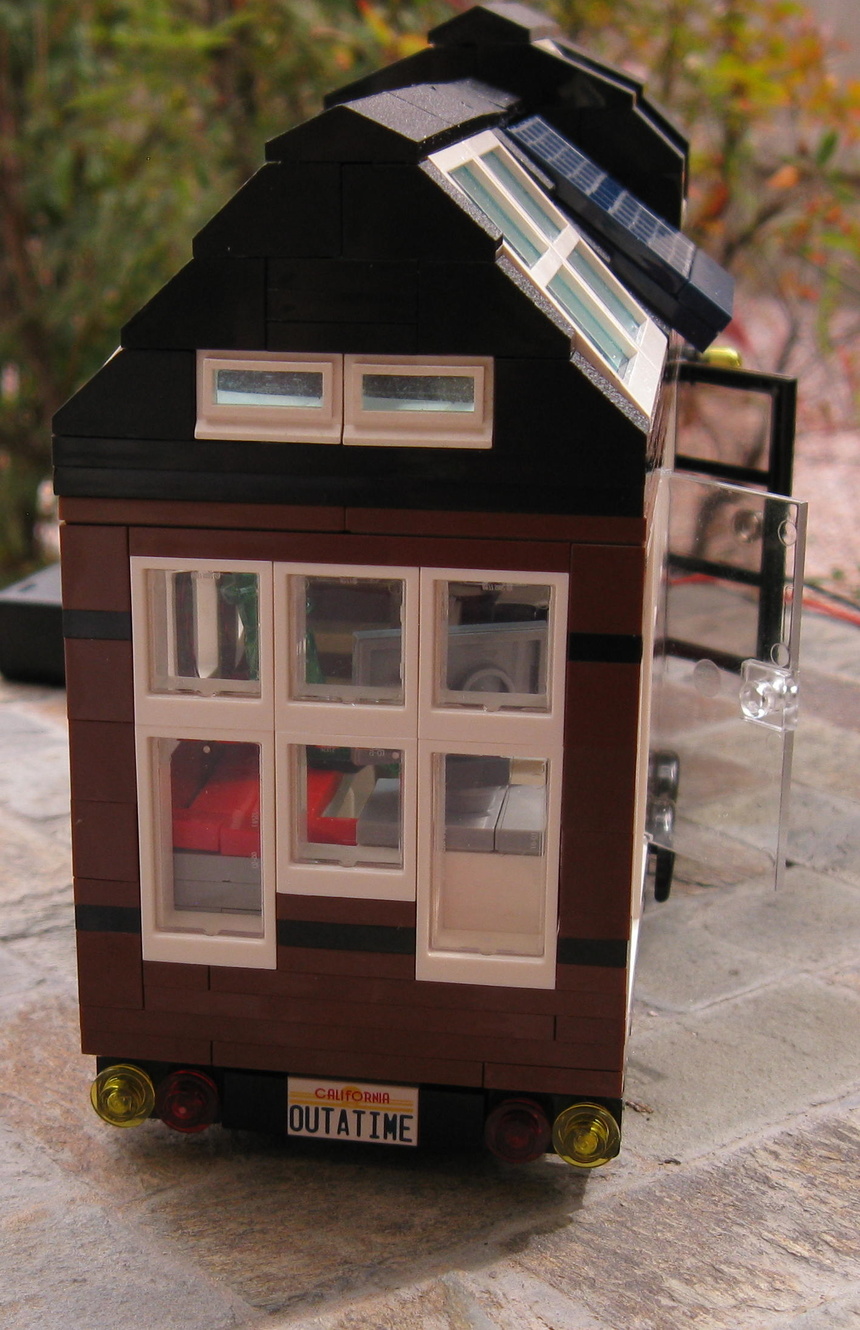 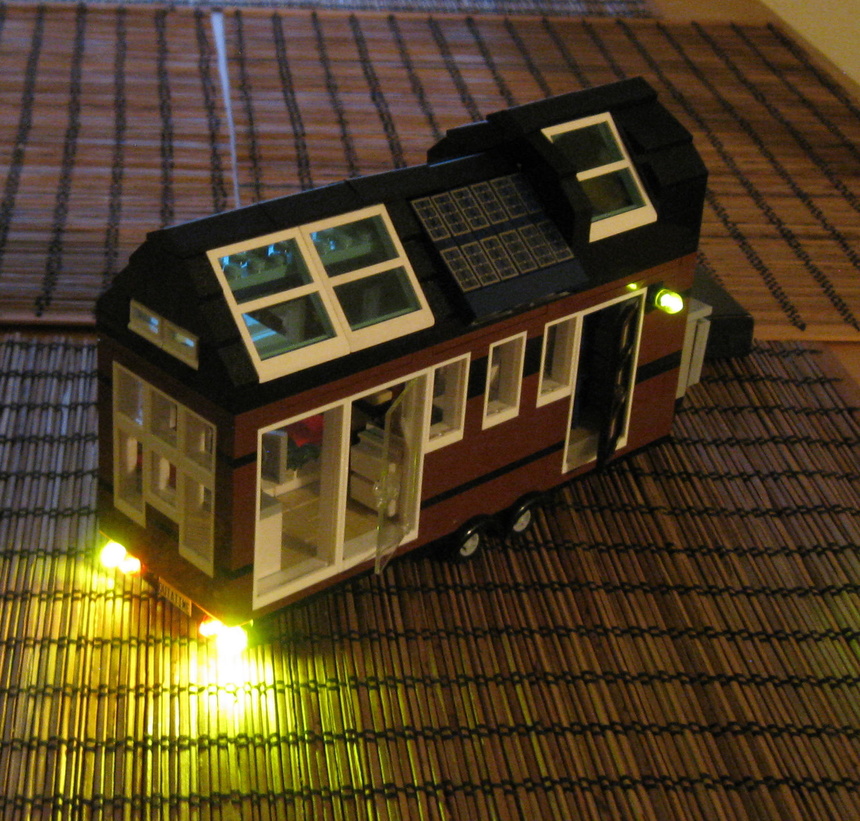 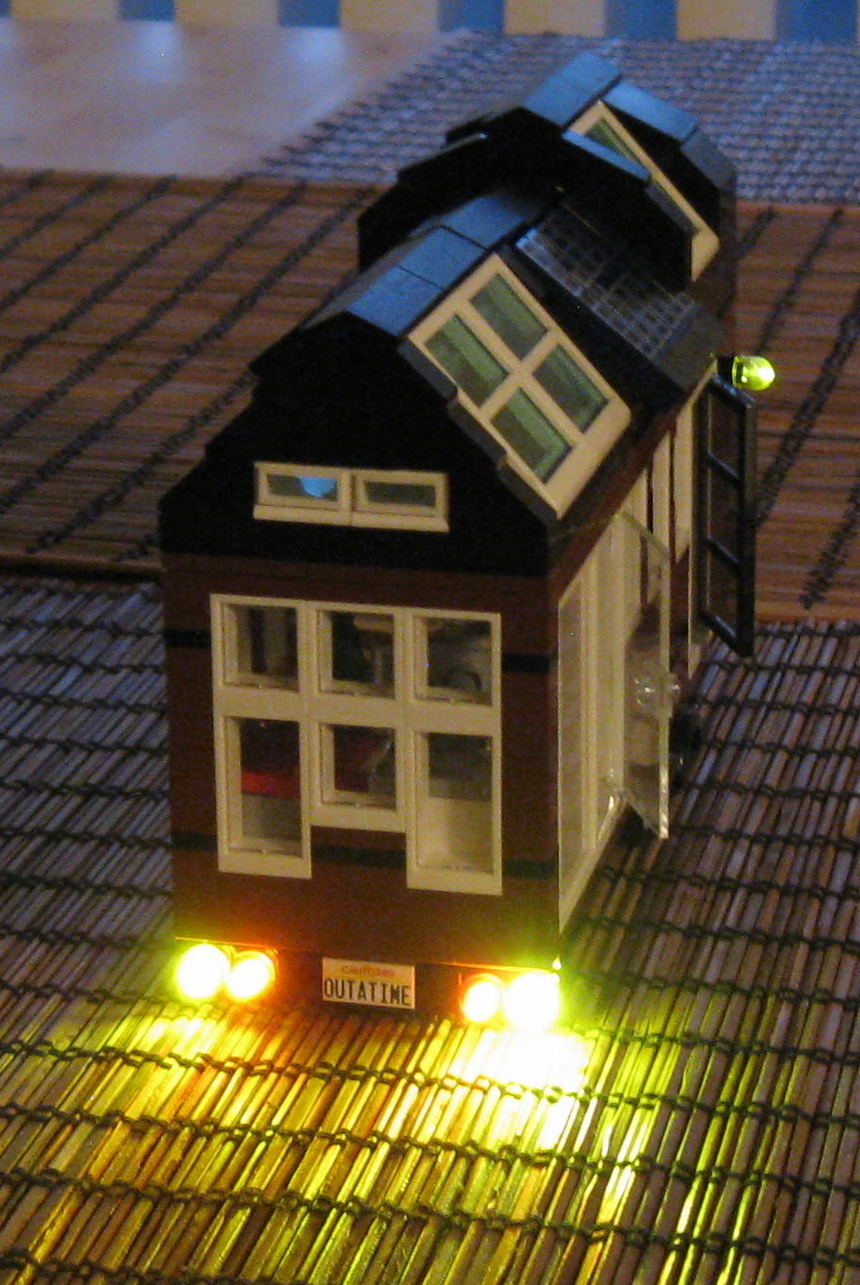 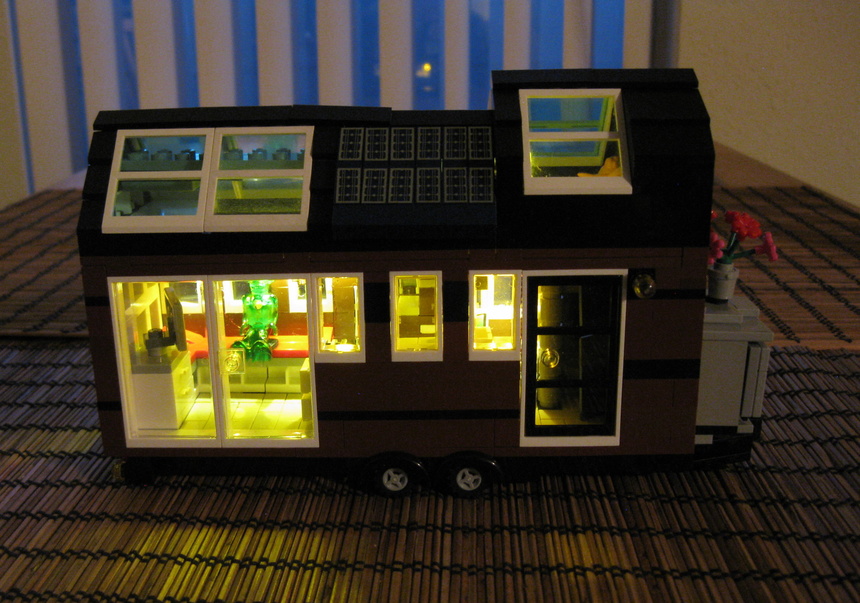 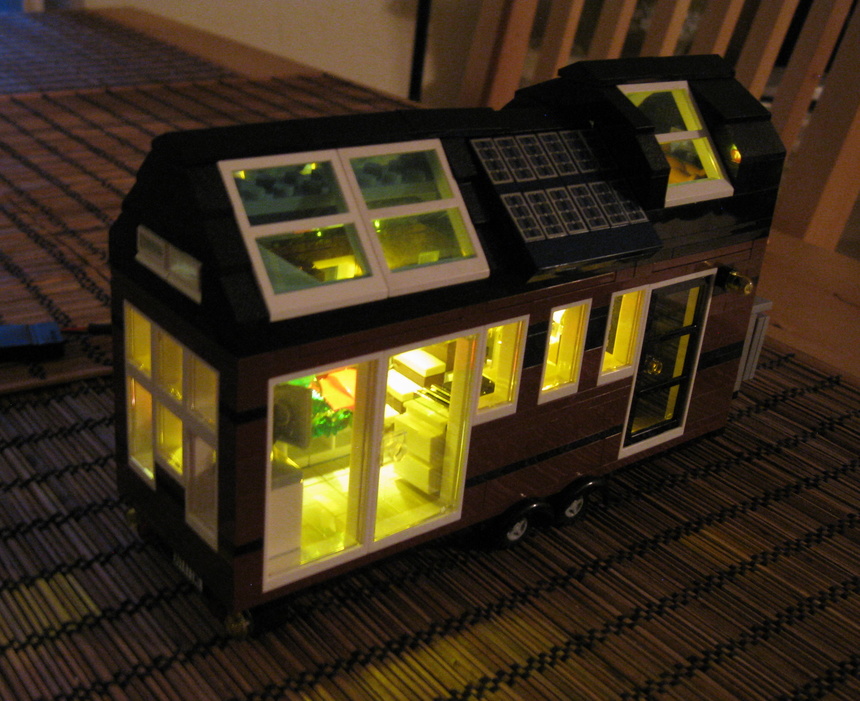 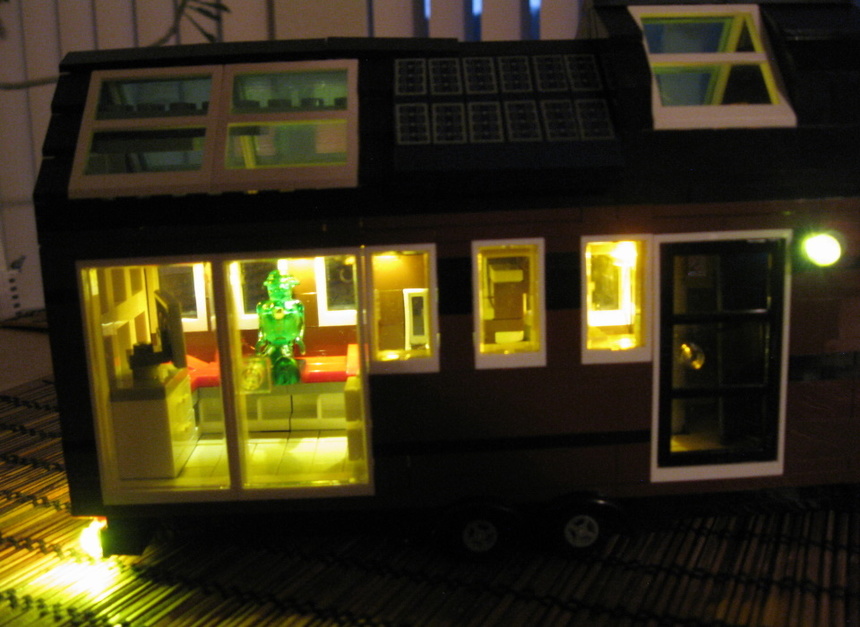