KYLIN FROM LOZ WITH LIGHTS 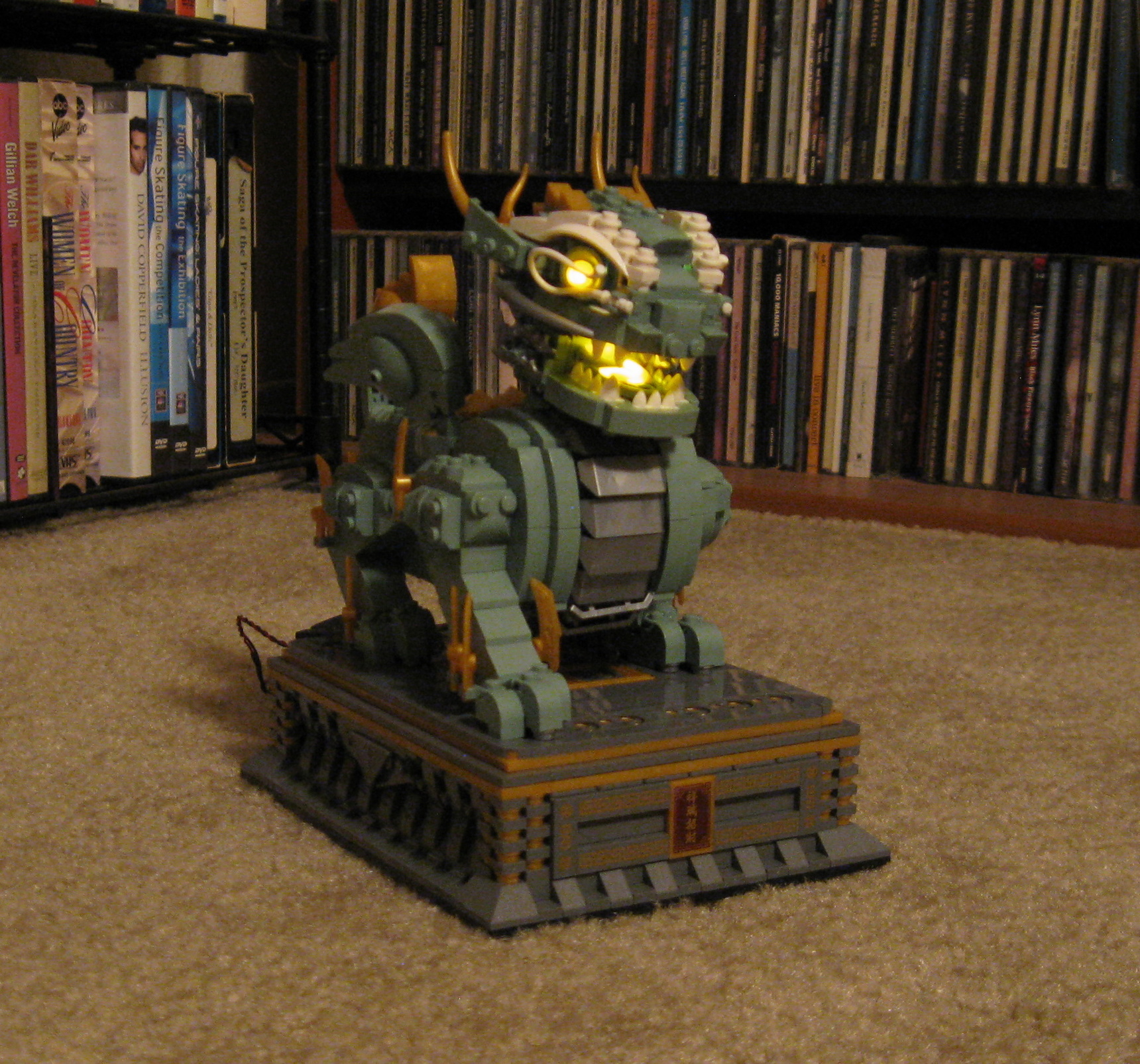 The Kylin or Qilin or Kirin or 麒麟 is a hooved, mythological creature from China, Japan and Korea. See the Wikipedia essay here. 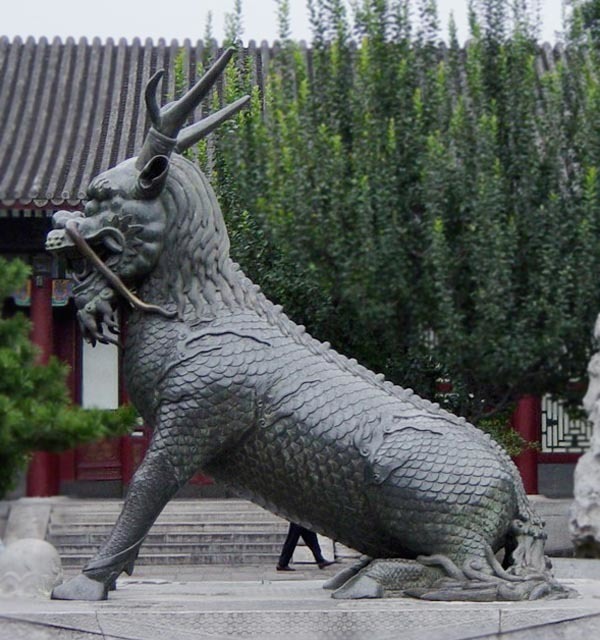 Quite a homely beast, so perfect to build in model form 😉. LOZ blocks of China offers an impressive version with over 1400 bricks on a 6.3 by 4.3 inch base here.  These are LOZ mini-blocks which are two-thirds the size of Lego bricks. I’ve completed several other projects using these China clone bricks. See several here. For non-Lego, the LOZ pieces are high-quality and easy to work with. This set has an enormous variety of distinct bricks covering two full pages. 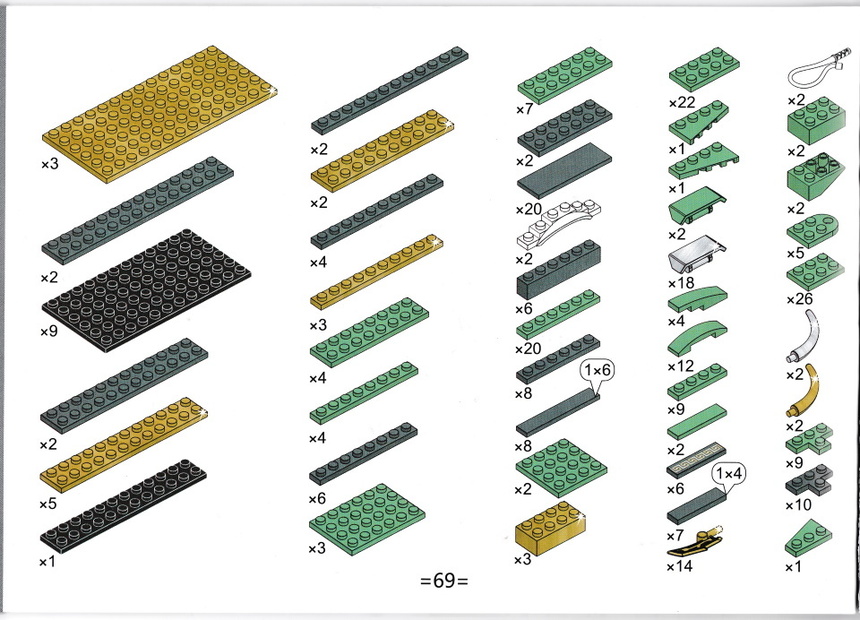 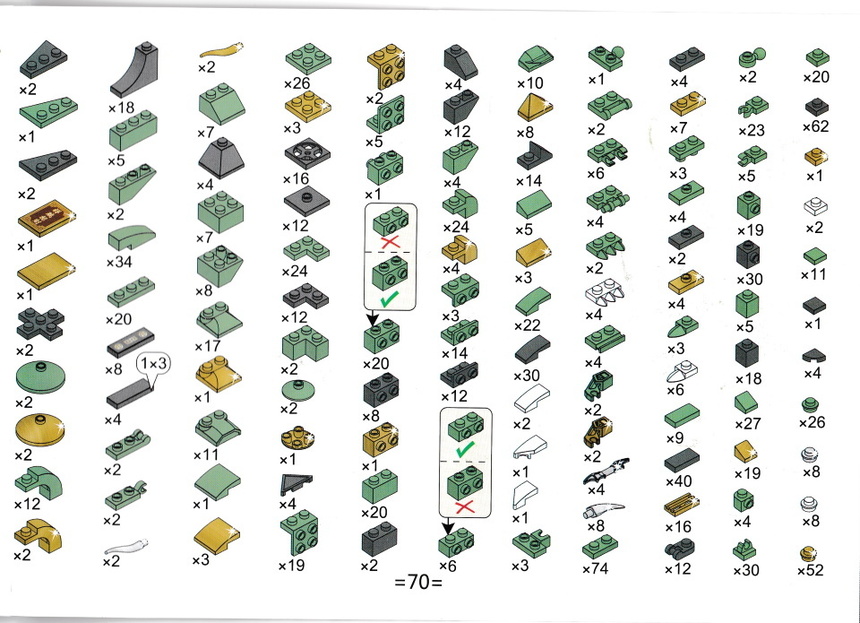 These parts pages quite carefully distinguish brick styles which are close but not identical in order to prevent mistakes. See the bricks above and below marked with red “X’s.” The care taken in the creation of the instruction manual can also be seen in the detailed graphics. For example, 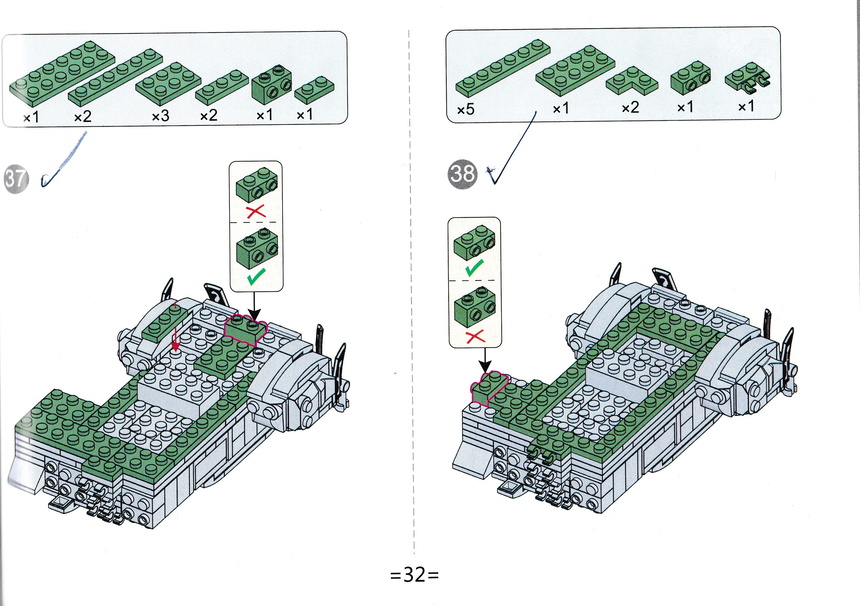 The 70-page manual does a very good job of clearly laying out the 102 building steps.

The gray and gold base may be the most impressive part of this model. Nineteen instruction pages are devoted to the base alone. The anonymous designer includes Chinese characters, decorations and an ornamental tablet in front. 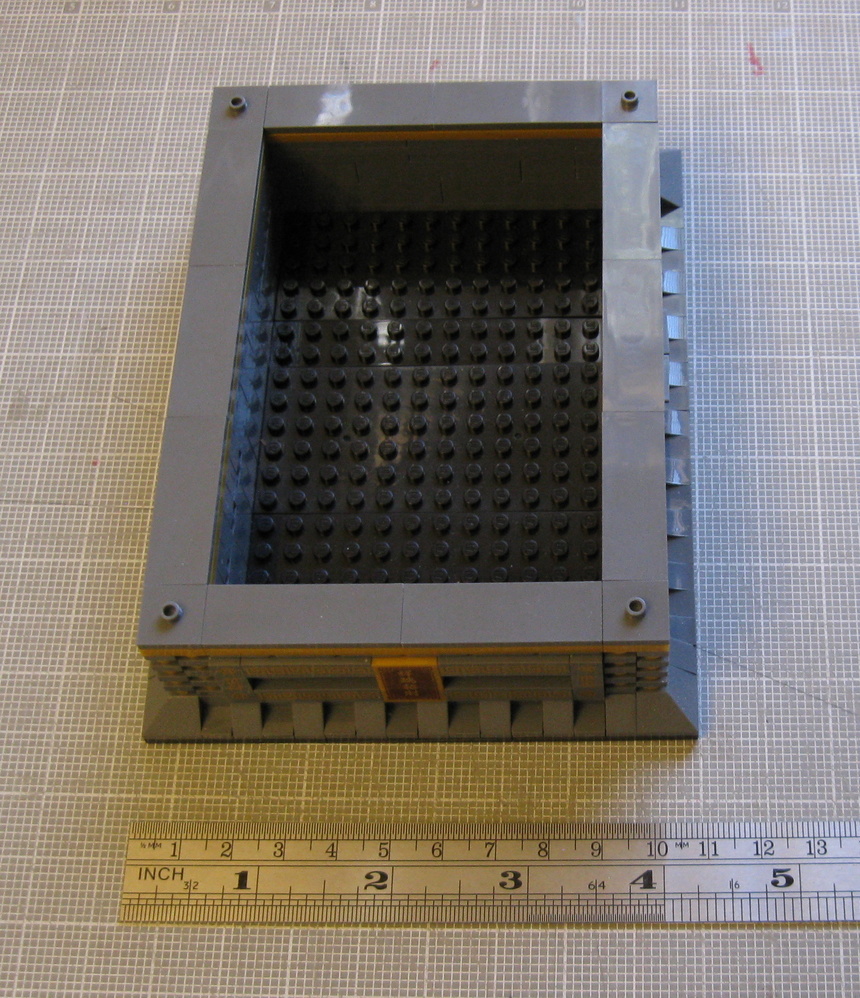 Knowing I’d need space through which lighting wires could pass, I left an opening in the cover of the base. 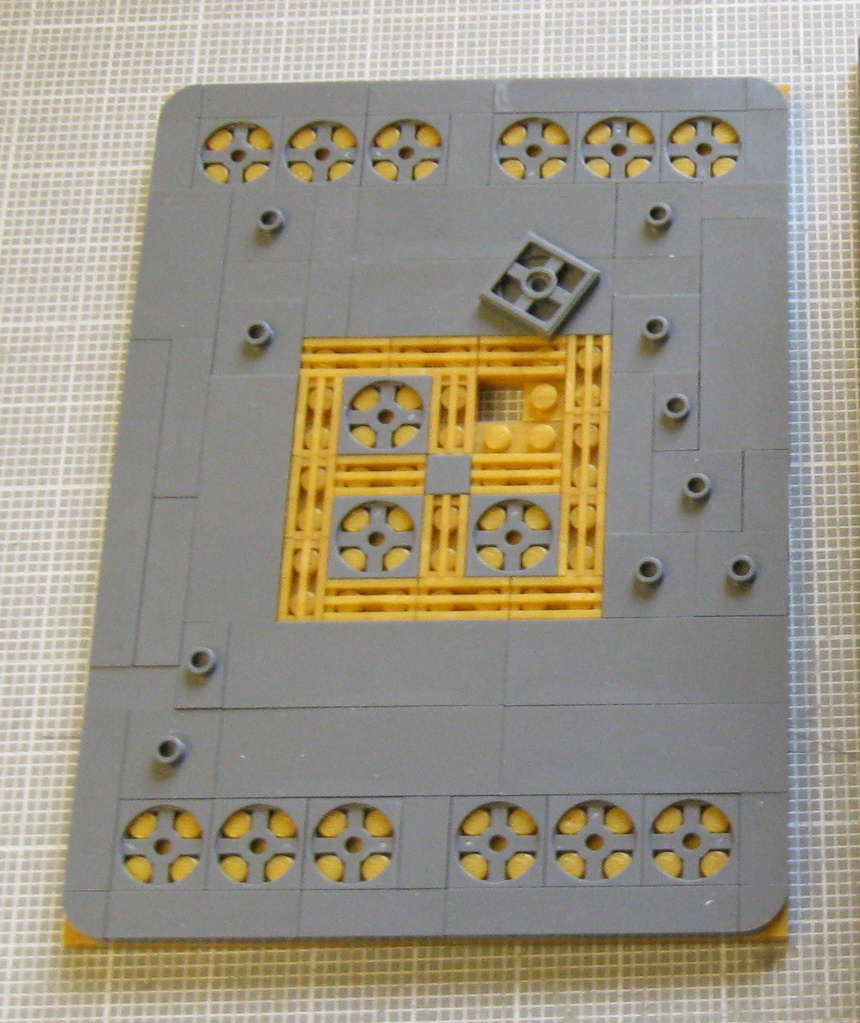 Power for three Brickstuff lights is provided by one coin-cell battery pack (SEED04) connected to a 1-to-4 Adapter Board (BRANCH15). I had to make a minor adjustment to the rear wall of the base to allow the power wire to pass through. 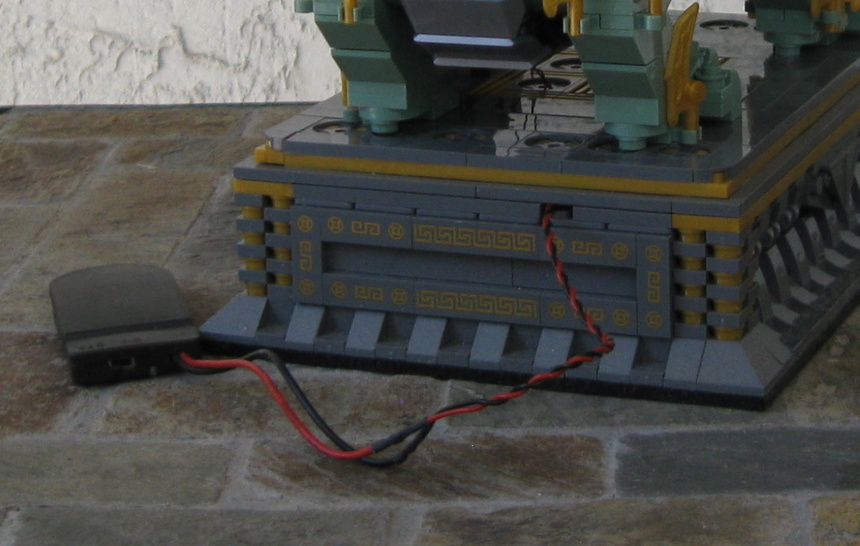 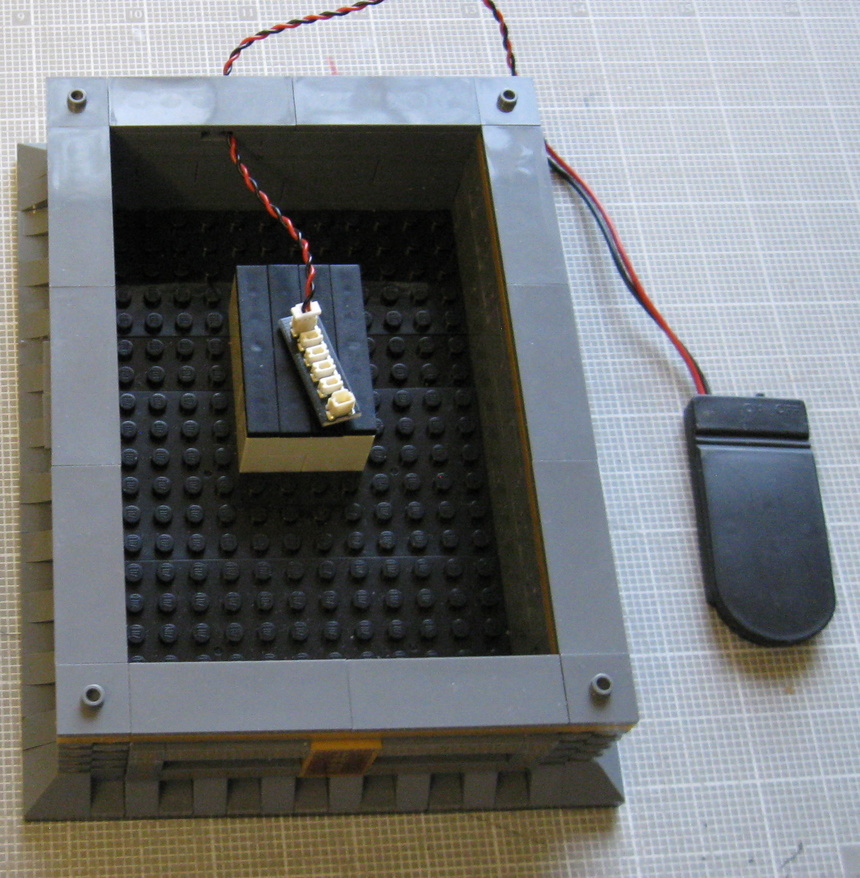 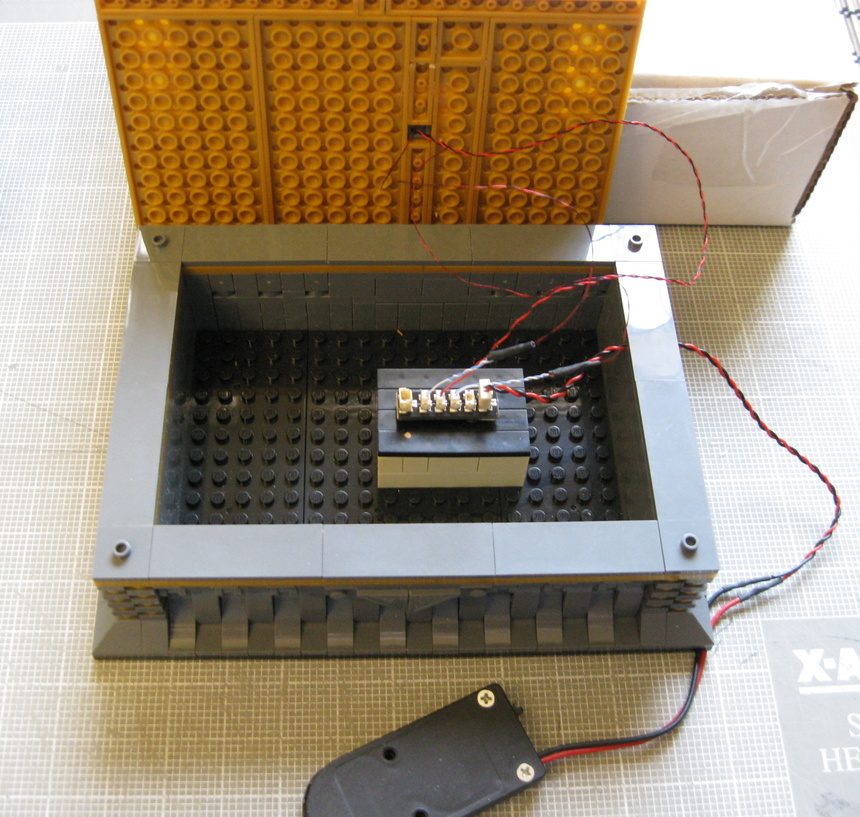 The bulk of the building steps are devoted to the Kylin itself. The build is quite involved. In order to see how LED wires could be handled, I jumped ahead to build the eyes, lower jaw and head first. 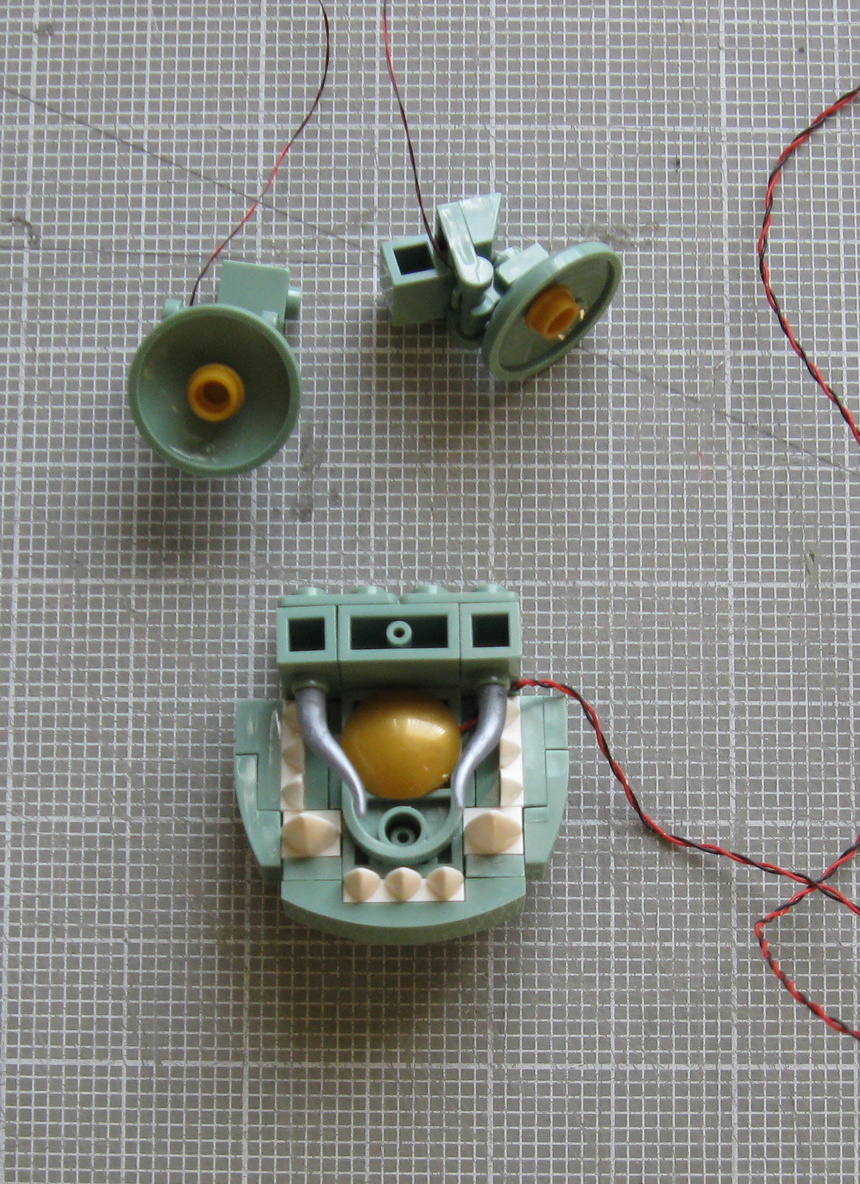 Here are the sub-builds for the lower jaw and parts of the eye assemblies. One LED wire (a flickering one—LEAF01) is installed with the light end sandwiched underneath the upside-down gold round plate. I discovered much later that the green dish bricks in the eye sub-assemblies were not the correct ones to use. I had to fix this error later in mid-build and reinstall the two mini-Pico lights between the green dish pieces and the gold round bricks used for the eyes.

The larger green dish on the left is used for the wings of the Kylin. The smaller dish on the right is for the eyes.  Here are two photos of the completed head. 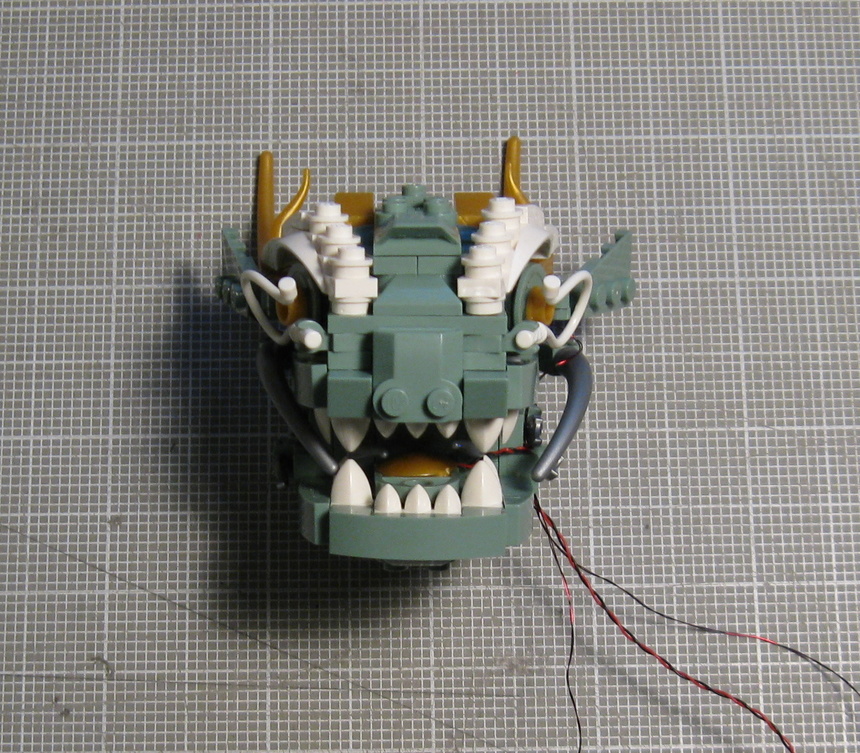 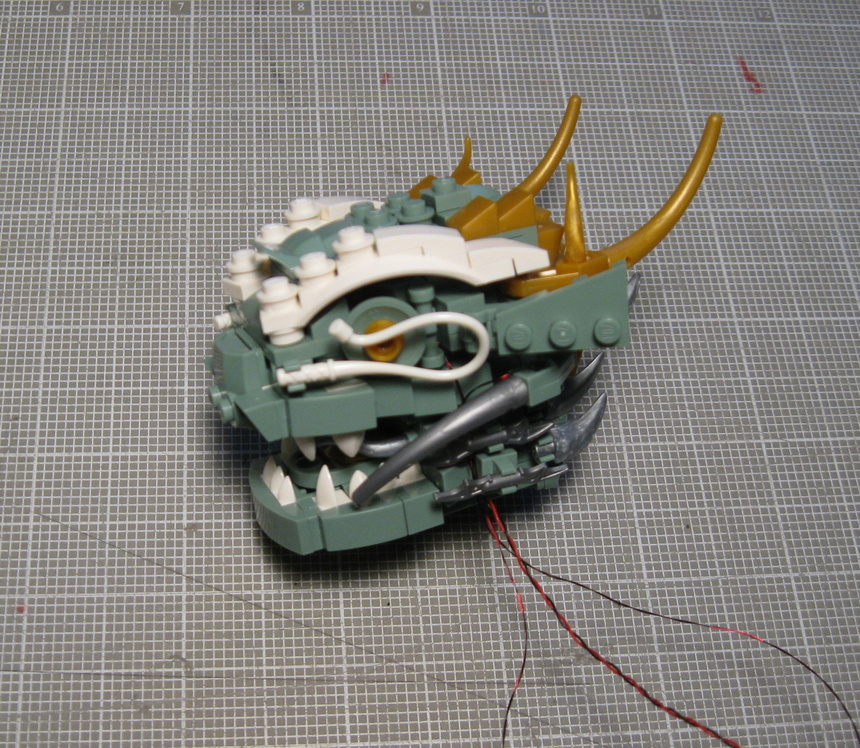 I discovered no good way to completely hide the three LED wires from view—particularly after the head is attached to the body. The assembly of the torso is very dense and brick-heavy with no openings for hiding the wires. So be it. You can see the Brickstuff LED cables in several of the following images.

This may be the most butt-ugly model I’ve ever built and lighted using Brickstuff gear. A horned beast is a horned beast, lights or no lights 🤣. But, the build was a real pleasure. High quality Lego-like bricks (in a smaller size) and an excellent instruction manual with very clear graphics. Your thoughts may vary. Here are some shots of the competed model, unlit and lit. You can view my Google photos album here which includes a few building shots and a short video of the lights “in action.” 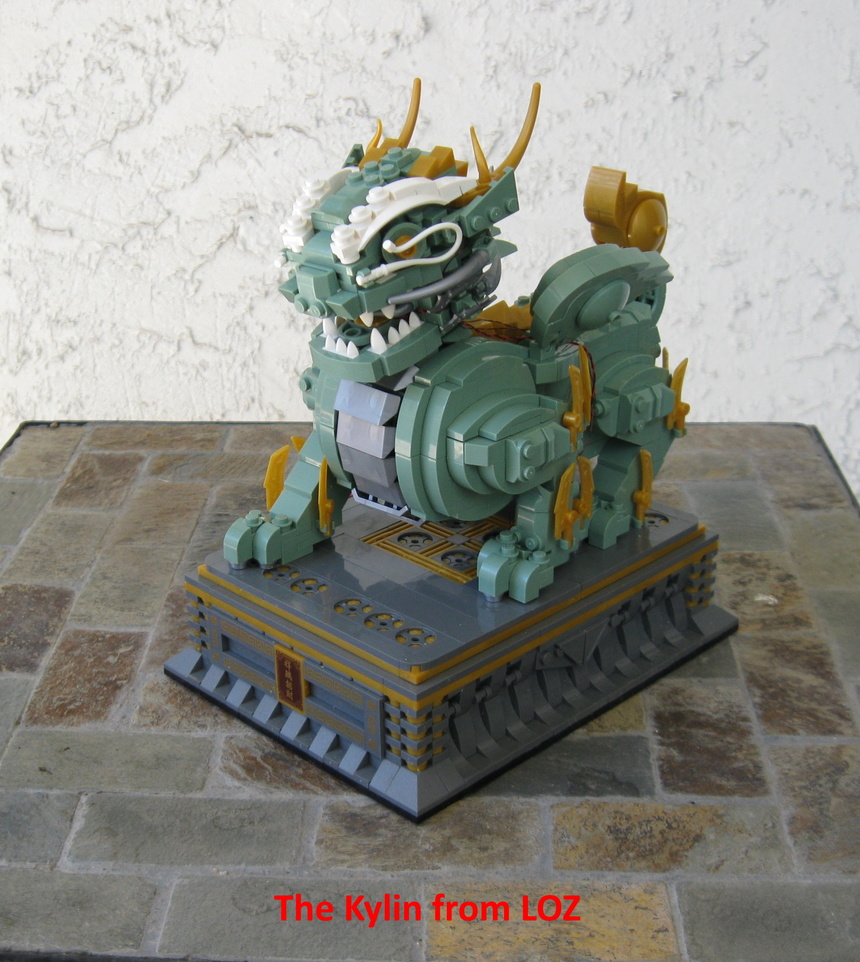 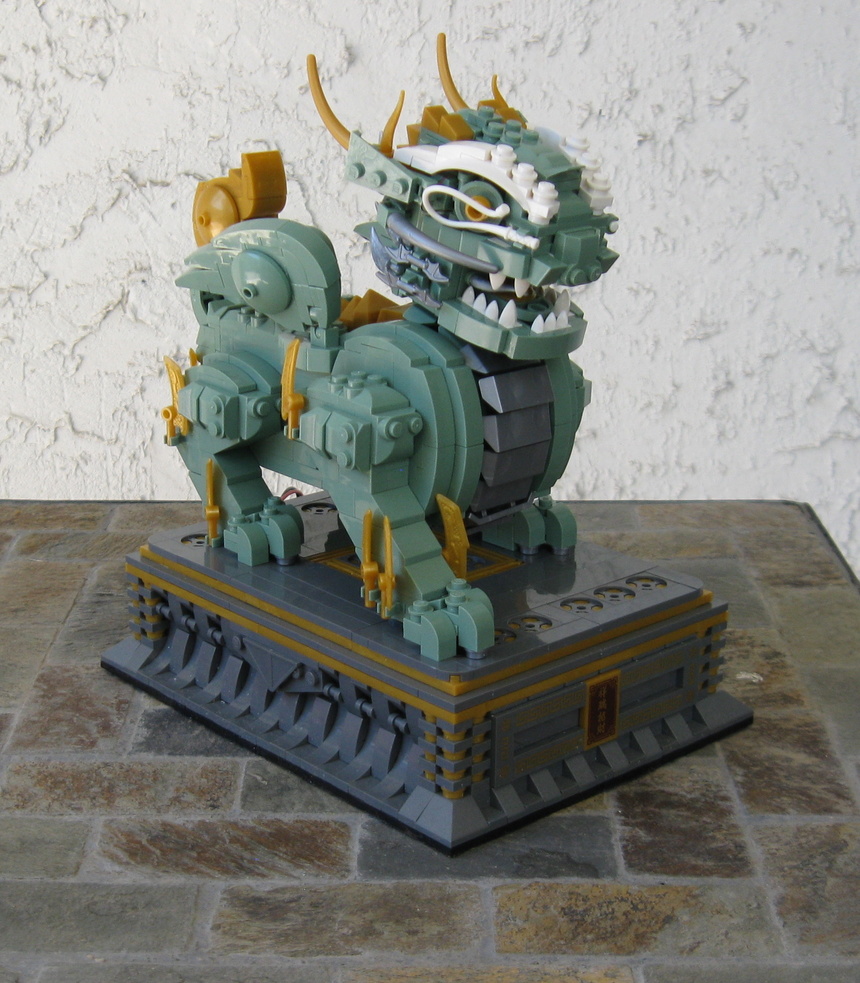 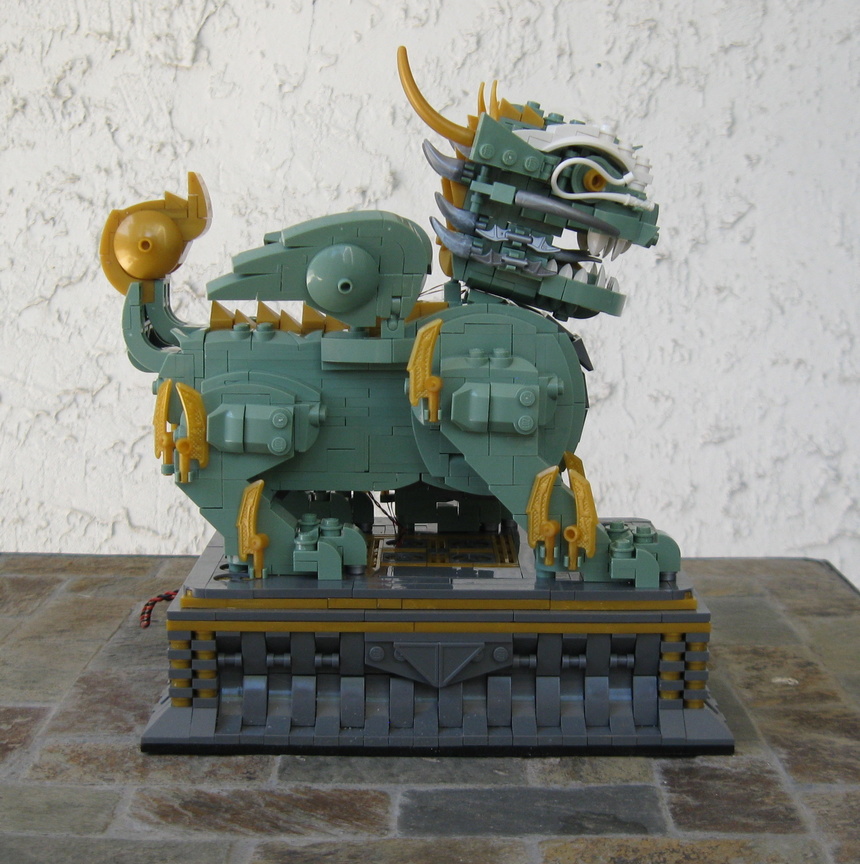 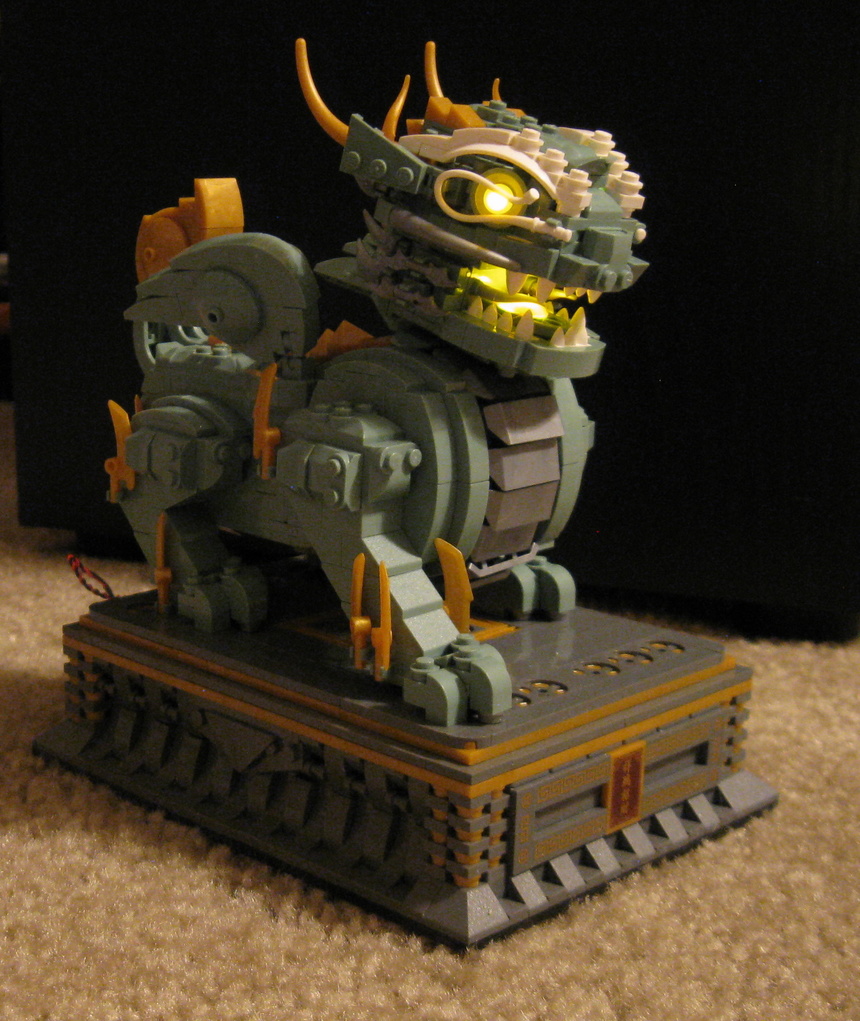 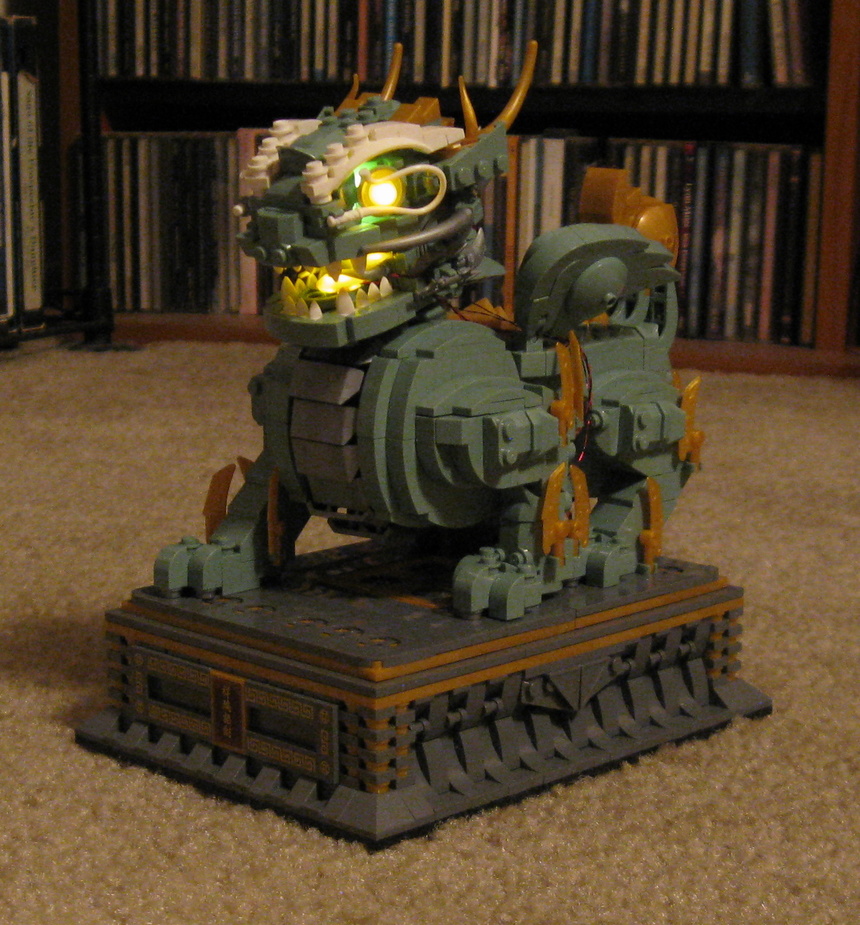