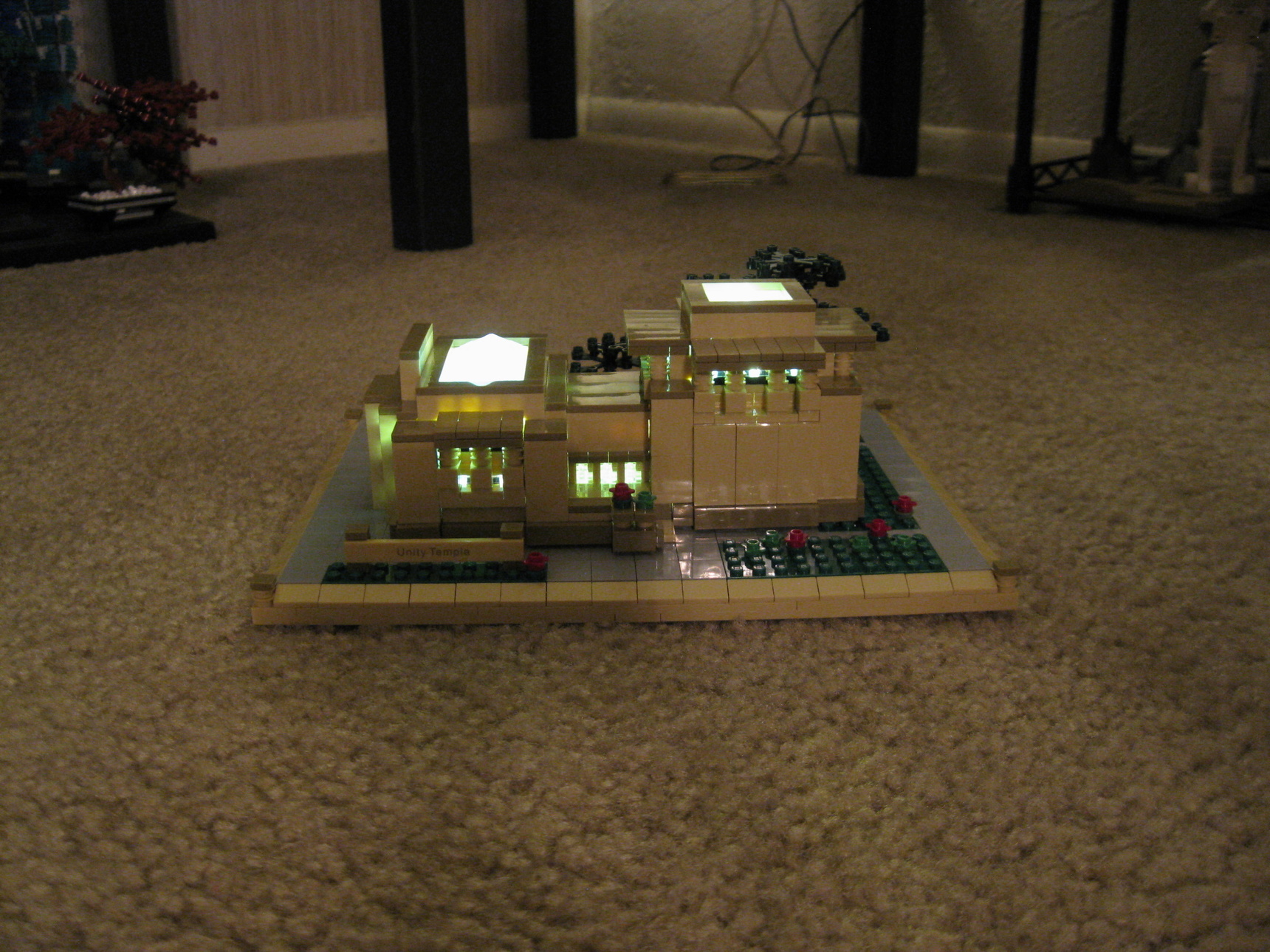 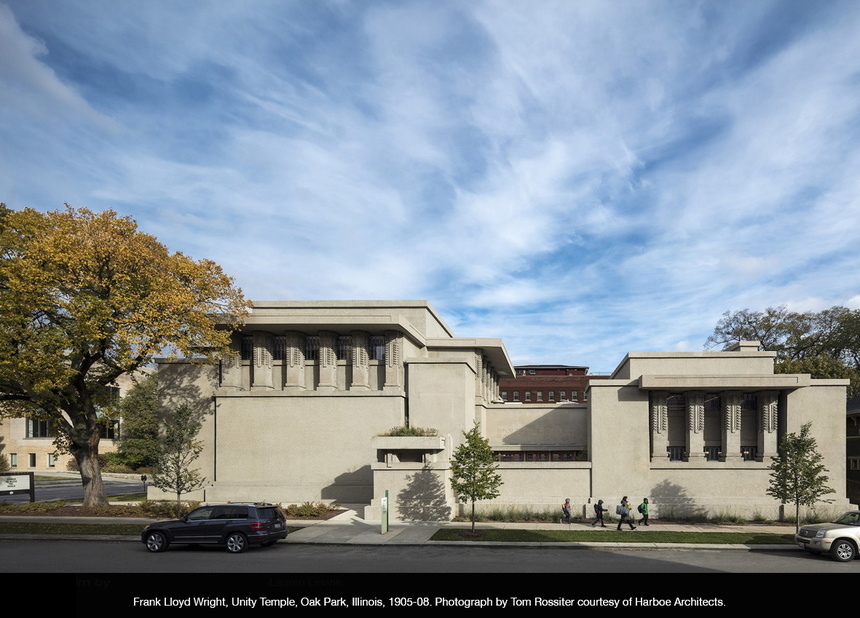 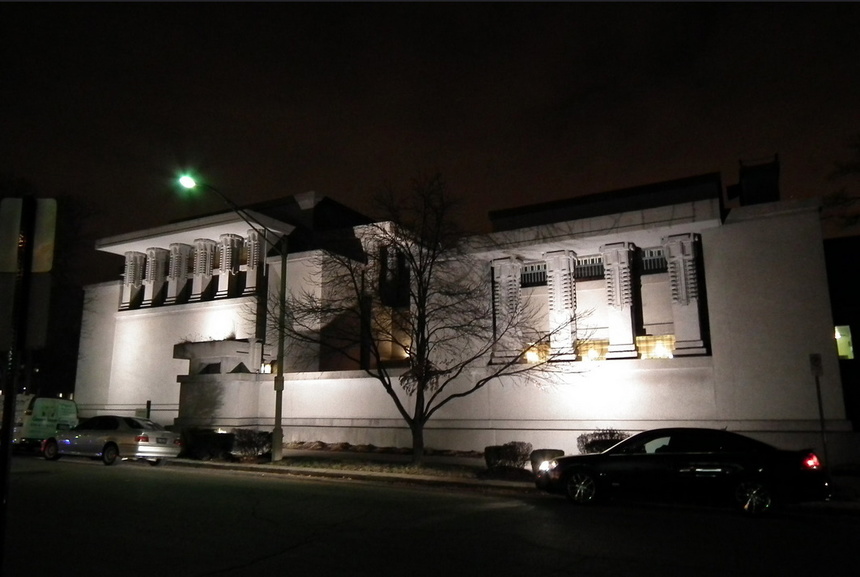 Frank Lloyd Wright designed the Unity Temple in Oak Park, Illinois, where it was built between 1905 and 1908. More information can be found at the Wikipedia page and at the the architects’ “restoration” page.

The Little Building Company sells this wooden model of Unity Temple, as well as other architectural models.

Now we have Adam Reed Tucker’s design from his company, Atom Brick, which is comprised of 912 bricks on an 8 by 6 inch base. All of the Atom Brick models are made up of bricks from LOZ Blocks of China. LOZ mini blocks are LEGO clones and are two-thirds the size of regular LEGO bricks. See my write-ups on other LOZ models: the Kylin, the Robie House, the Farnsworth House, and The Imperial Hotel here.

The Atom Brick Unity Temple model comes in a fancy box with a hardbound assembly manual. 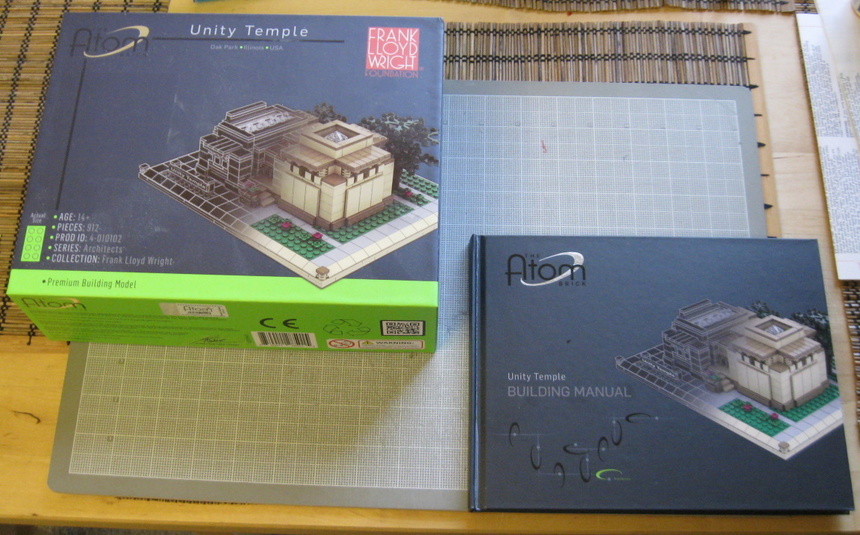 Unlike LEGO and LEGO MOC models where one can customize to one’s heart’s content, this is not really possible with LOZ block-sized models. There is no good source for obtaining extra LOZ bricks in order to make changes. So, I had to pretty much settle for what came in the Atom Brick box. I would have liked to have the option of substituting green or dark green tiles for the plates used in the grassy areas. I might have wished for a more elaborate creation of the flora scattered over the grassy areas. That was not to be—other than a few nanoblock flowers I added as an experiment to one side of the base. I did make changes to the base and the inside of the structure in order to accommodate the lighting and power supply cables. See also my comment section below.

The build was fairly straightforward. Here are two shots of the early stages showing the space opened up to allow for the power and lighting cables. 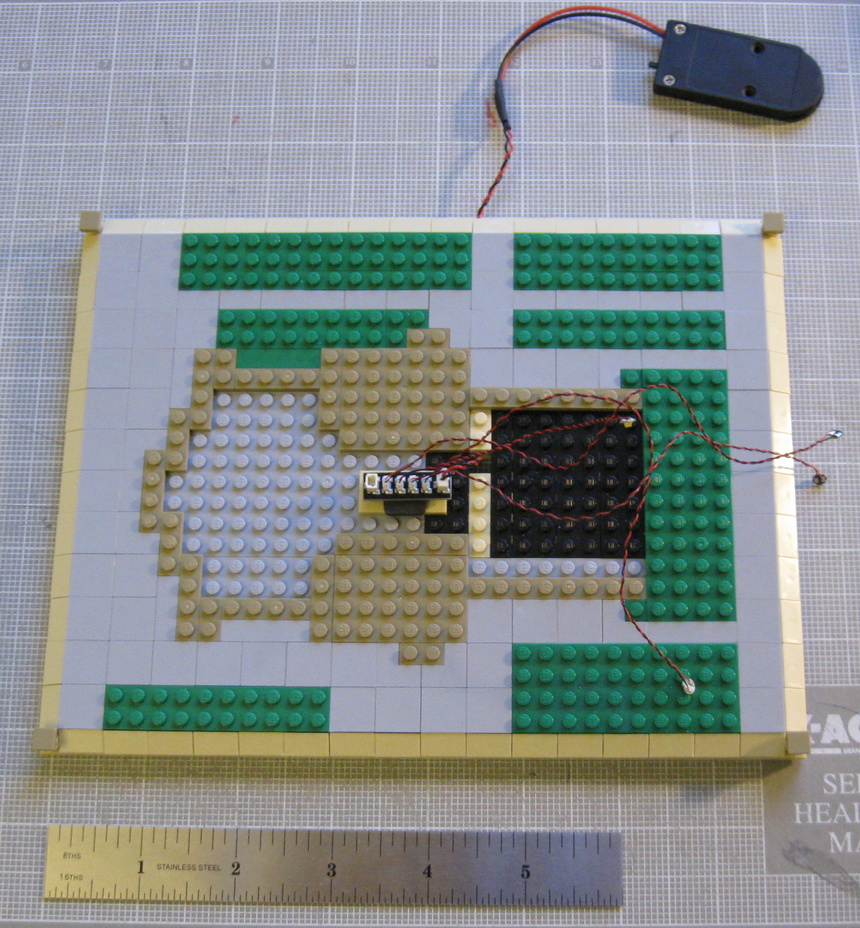 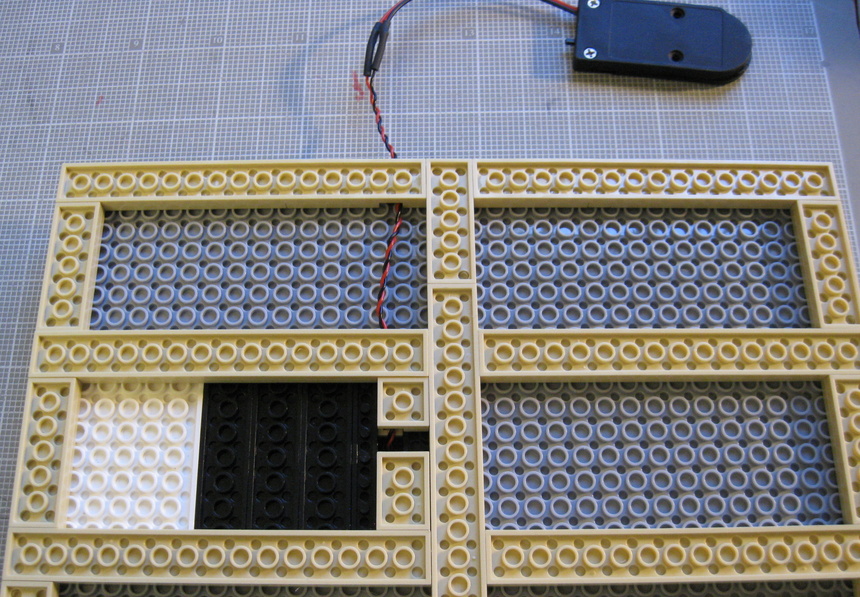 My motivating guide for the lighting of this model was “blue light.” I don’t know where this idea came from. I just wanted a bluish tint to the Brickstuff lights. One of the nicer feature of Adam’s model is the look of the two skylights. The beautiful designs embedded in the skylights are even for sale as art glass reproductions. See here.

I used the following Brickstuff supplies:

Creating a blue hue required building up supports to lift up the left wing and right wing LED lights and “covering” them with transparent blue LOZ bricks and tiles—two types of the few specific bricks I had extras of. This had to be done for the left and right wings, as well as underneath the center roof to allow “bluish” light out the front and rear windows and doors. I wanted the blue light to move upward toward the roof and out the front, back and side windows. 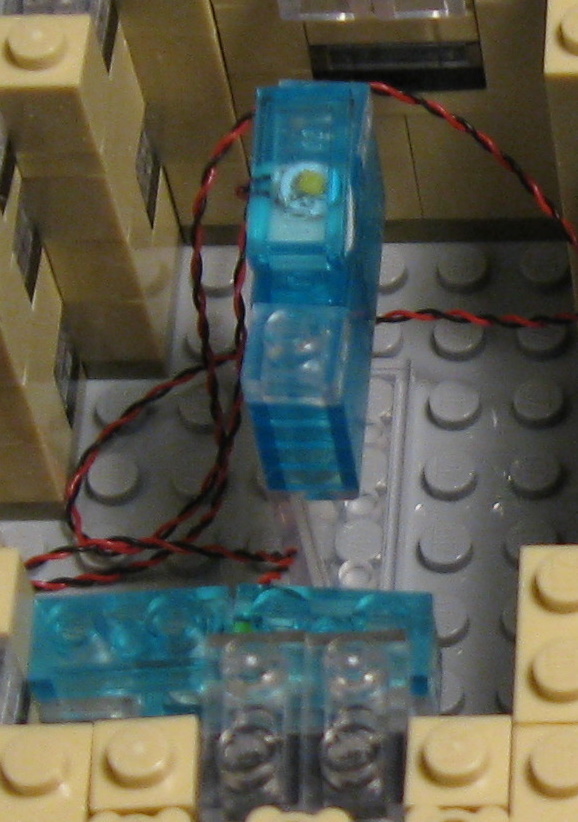 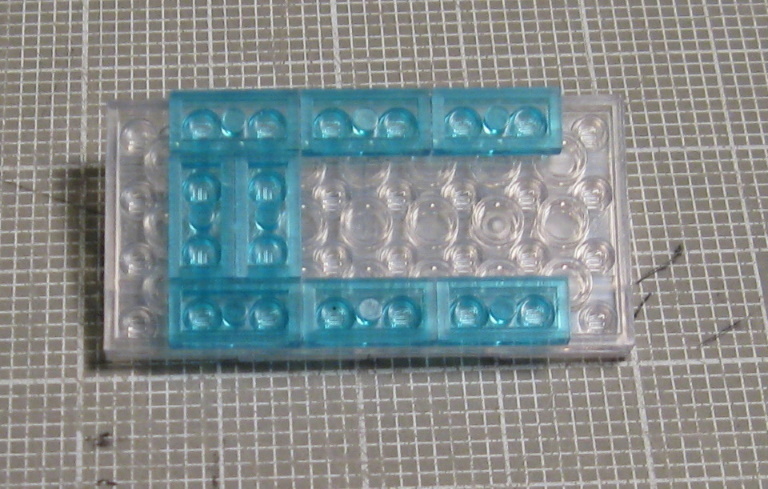 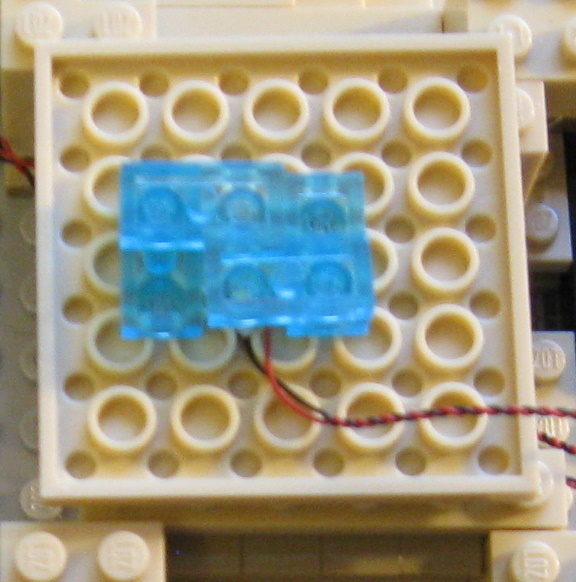 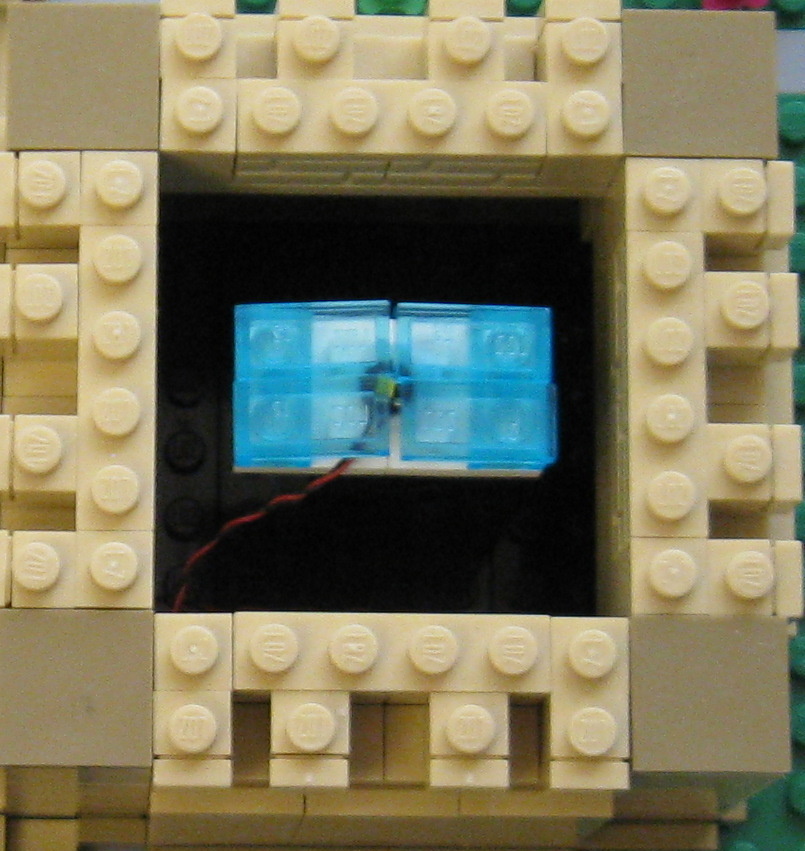 Here are several shots of the finished model, both unlit and lit. 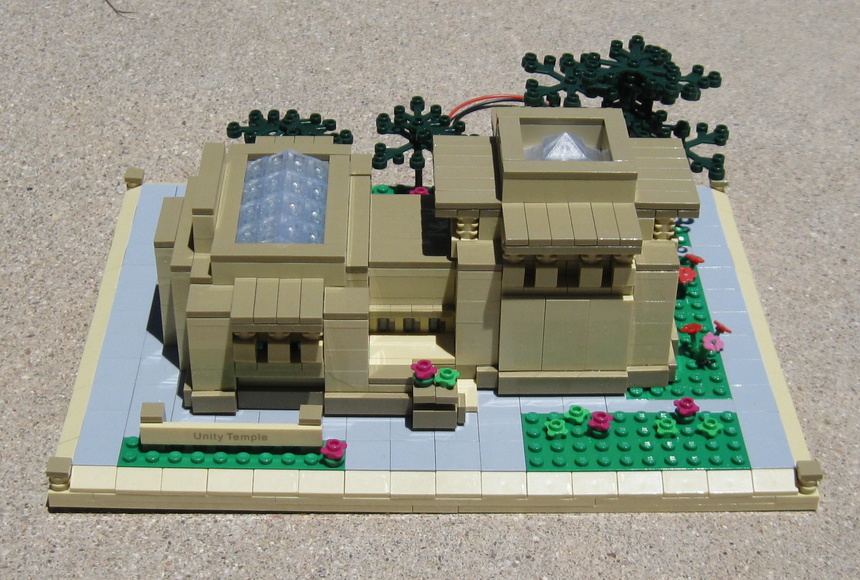 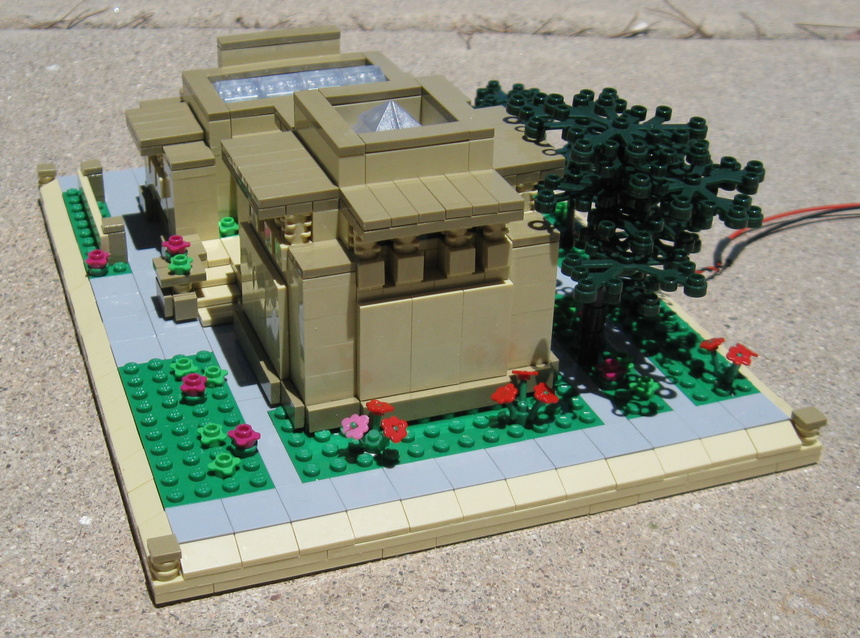 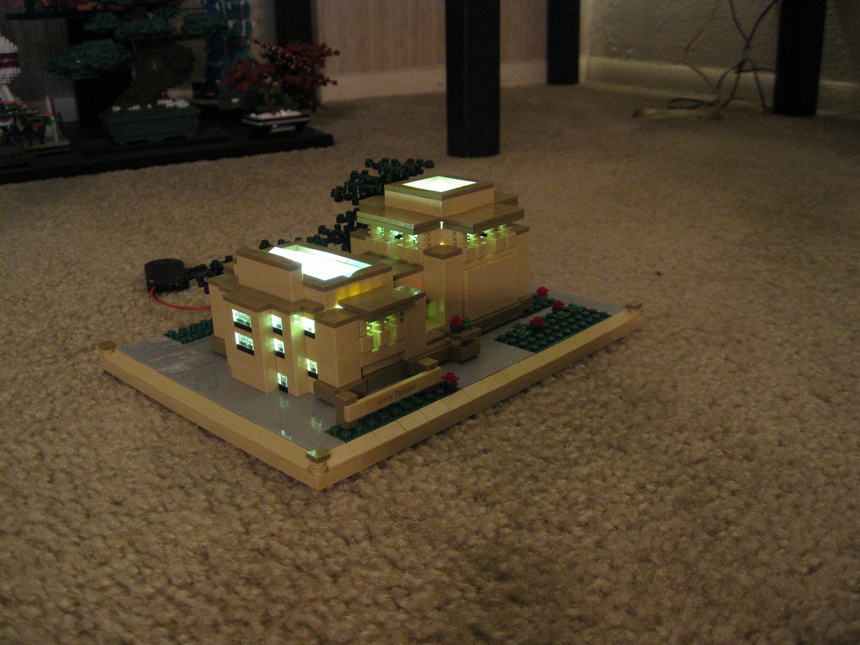 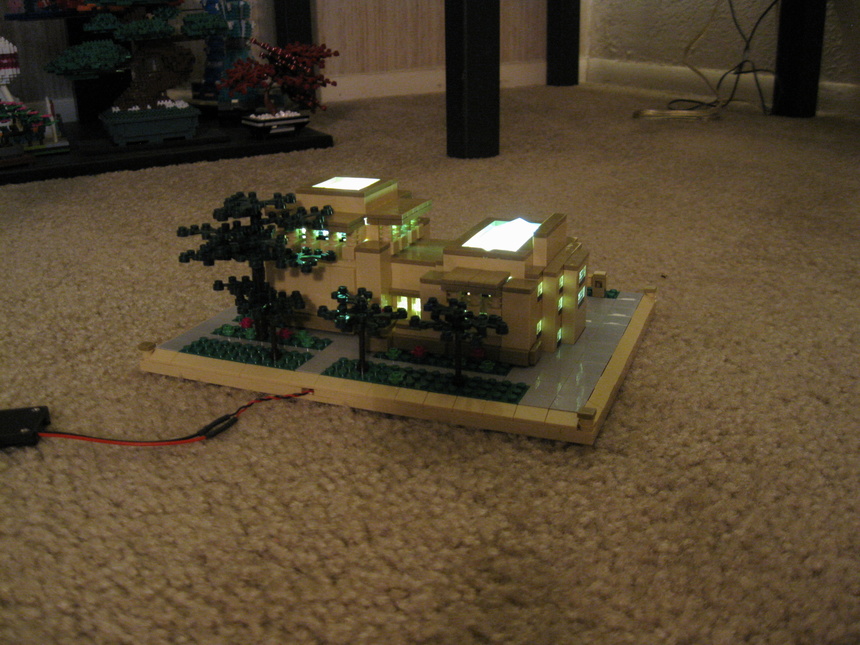 More photographs are available at my Google Photos gallery here.

Adam Reed Tucker has created a good likeness of the original building using a fairly small selection of LOZ bricks. Few major compromises seem to have been made in the design. The rooftop skylights look particularly fine. The trees in back of the model create a nice effect. I do wish more creative flora had been designed. The LOZ version of the 1X1 round plate with flower edges (Lego brick #33291—see here) is used in several colors for fairly unexciting-looking flowers and plants, for window separators, and even for corner pieces of the base. I’m sure different choices might have served better. The LOZ Kylin model here made spectacularly creative use of LOZ versions of unusual Lego bricks. A more serious complaint can be leveled at the text of the assembly manual which begins with seven pages of text and photographs as background to the Unity Temple. The text provides little information and is written very awkwardly. I can’t help but wonder if this was a back translation to English from a Chinese text. The printing of the photographs of the real building are poorly reproduced. The Wikipedia page for the Unity Temple is better in both regards. Odd, too, is the tone the text takes about “creativity.” Here’s the first page of the manual which has some odd things to say about creativity, complexity and detail. Strange, also, given that few alternative LOZ bricks are available to make changes and/or be “more” creative.  Nearly impossible, therefore, to take a MOC turn with this model. 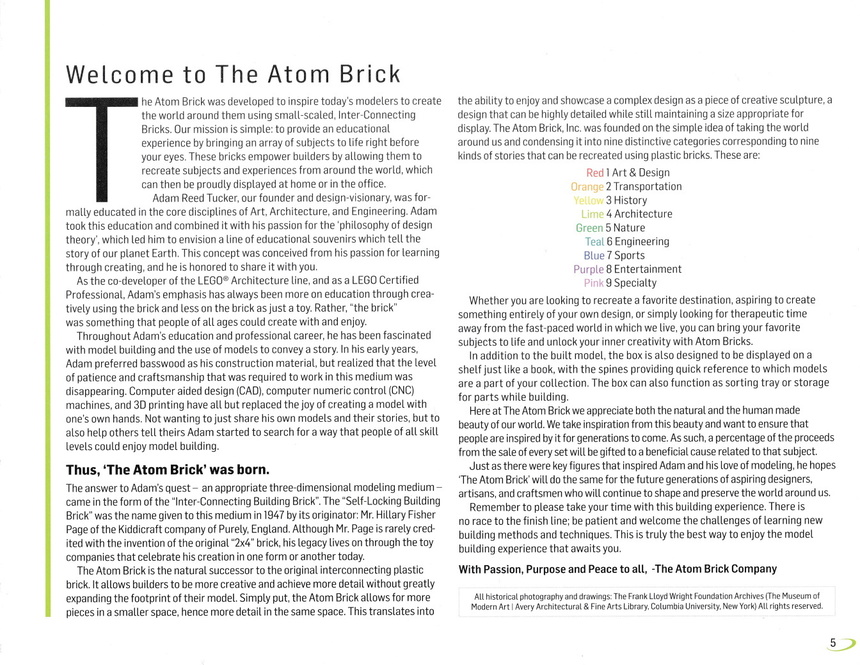