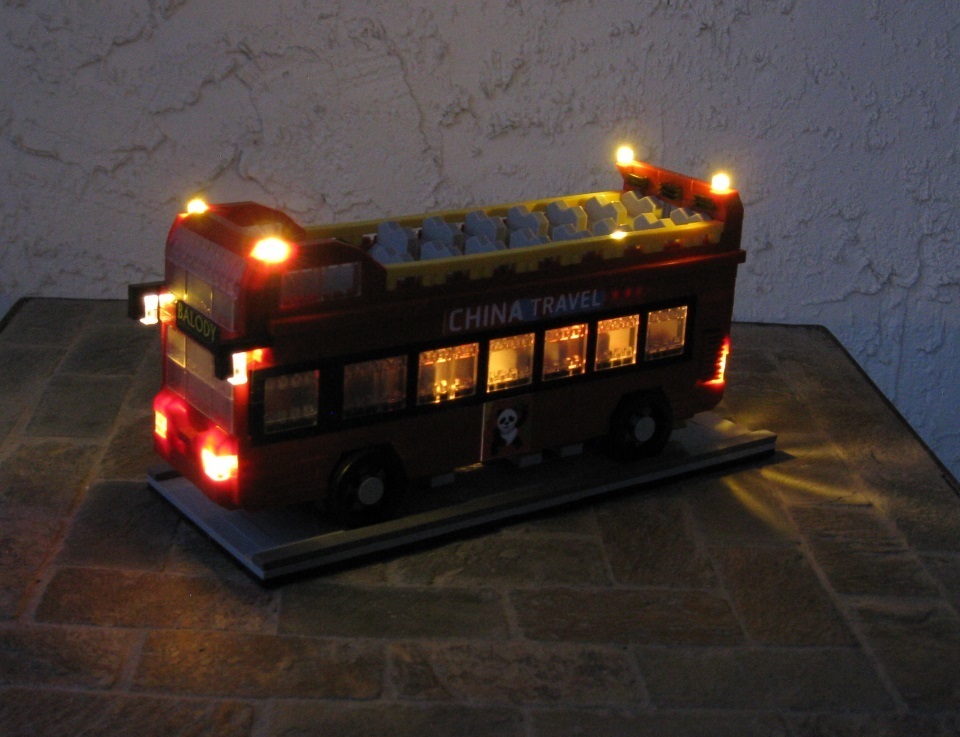 I’m sure I was as impressed as everyone else when Lego Creator put out its beautiful London Bus-- filled with lovely details, composed of 1686 bricks, and huge (13 in by 5 in by 7 in).  I’m sure someone must have lit this impressive vehicle. I—as per usual—decided to “go small.” 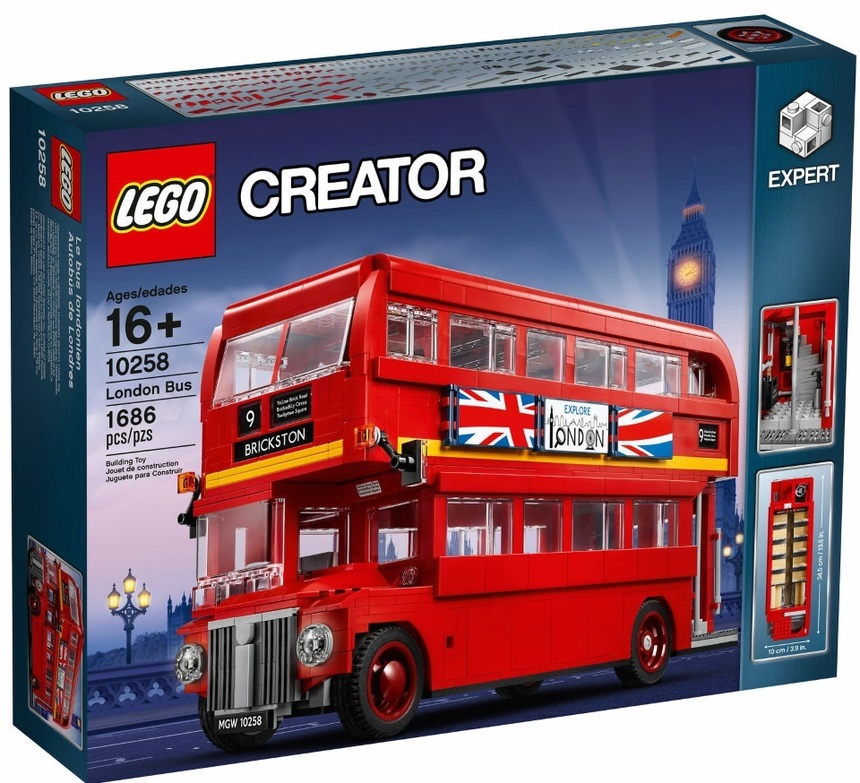 Balody of China makes a nanoblock-sized model of a double-decker China bus: 1270 bricks, 7.4 in by 2.6 in by 3.4 in, with far fewer elegant features than the Lego model. I particularly liked that this model sported an open top. I knew it would be a real challenge to light. 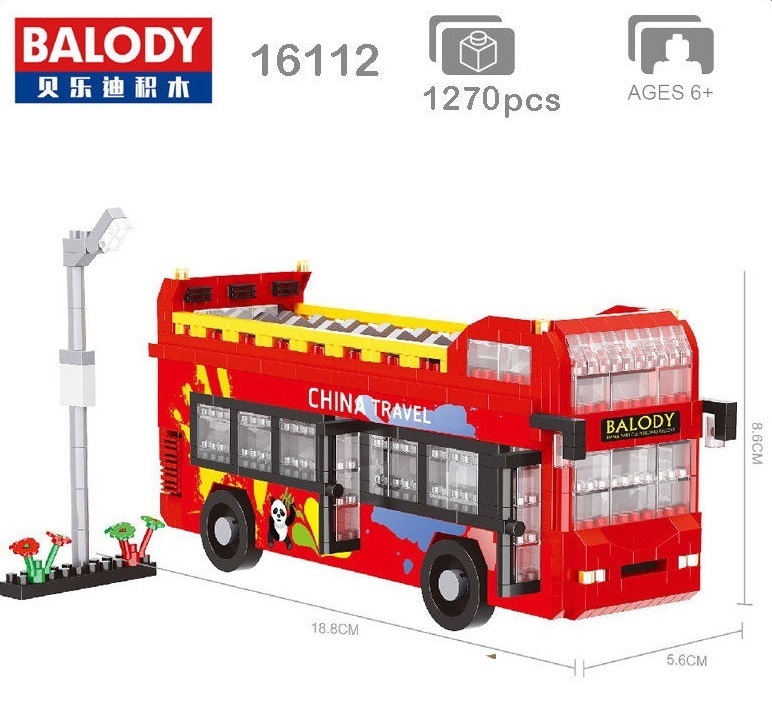 I’ve since found out that another Chinese company, ZRK (whoever that is), has fashioned something of a nanoblock-sized clone of the Lego Creator bus. 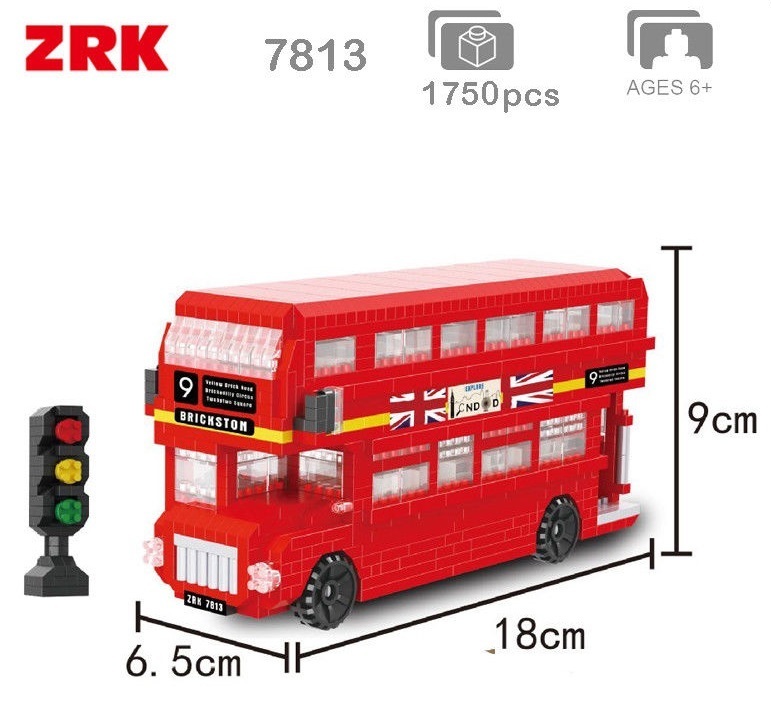 As soon as I received my Balody model from China, I began to ponder how many lights to install and where.  I decided on twelve LED lights for the front and rear headlights, front hanging side lights, at least two for the interior of the bus, and four roof lights.  I knew from past experiences installing LED lights in nanoblock models or in very small Lego MOC models that Brickstuff’s standard LED lights would be too large for all the snaking between bricks this model would require.  Rob previously designed a custom assembly of micro-LED lights with a special on/off switch and small coin cell battery box for me to install in a small Lego Model T Ford MOC.  See here.   I emailed Rob to describe my plans for the bus and the size of the model.  I included diagrams of the box cover and a photo or two of the first few completed steps of the Balody bus. 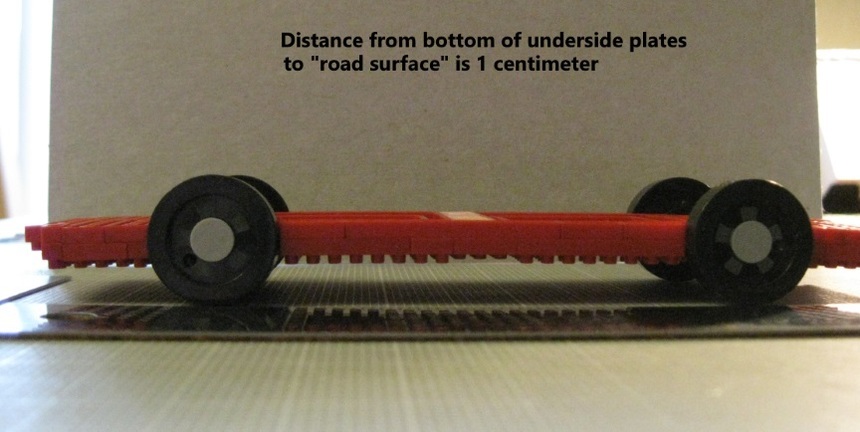 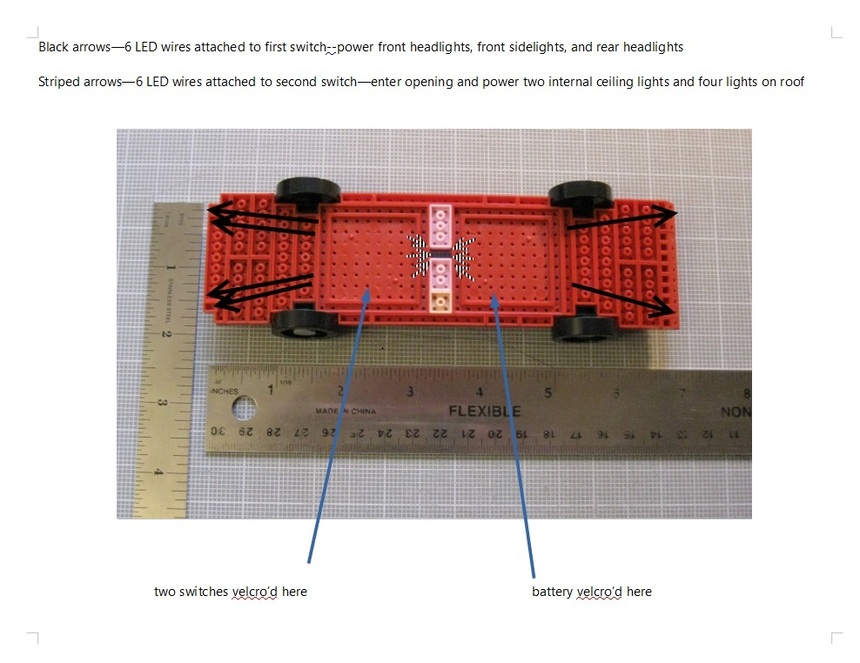 Rob was very cordial and creative and came up with the idea for an assembly of 12 micro LED lights attached to two switches (each controlling six lights) and powered by a LiPo battery which I purchased separately from Adafruit Industries.   See here.   This particular LiPo battery is very small and thin which was key to fitting it, a battery cable, two on/off switches, and twelve micro-LED wires underneath the bus where the clearance is only one centimeter.  I also purchased from AdaFruit a USB-powered charging circuit to recharge the LiPo when necessary.  Here is a photo of Rob’s assembly. 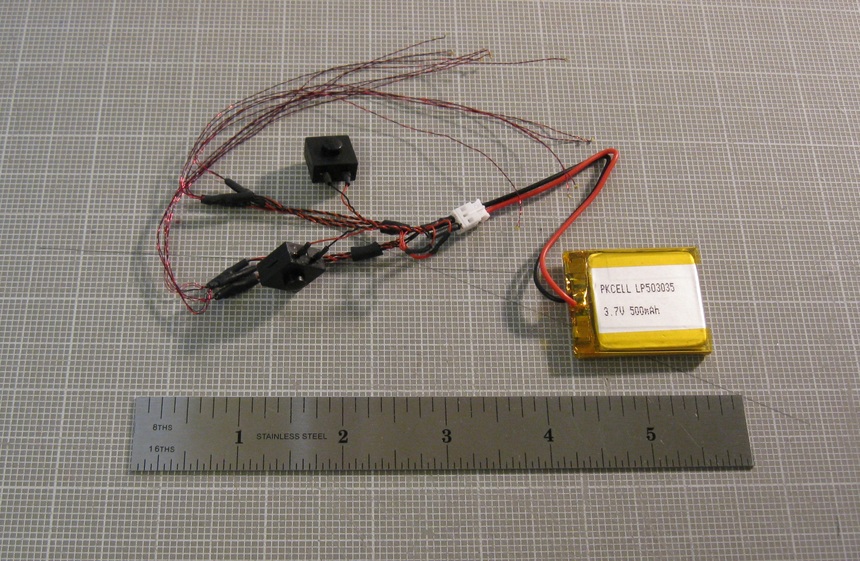 While waiting for the light assembly to arrive, I made small changes to the underside of the bus—basically moving the wheels and axles downward one stud (in relation to the bottom of the bus) to allow just a bit more room underneath to fit all the hardware.  Thin Velcro squares would be used to fasten the battery.  Thin black sticky squares would hold the on/off switches underneath the bus. Here is a shot of the attached light assembly.  I found that adding several nanoblock crosspieces (in gray below) helped keep the wiring under control. 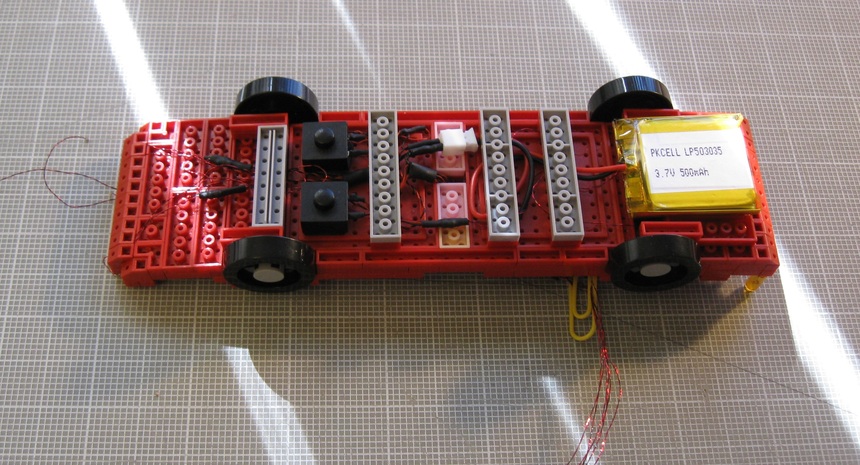 I did have to make some modifications to this model—in some cases, to create openings for LED wires to travel through.  In other cases, the very thin micro-LED wires were sandwiched between bricks.  I also needed to modify the nanoblock pieces used for the front and rear headlights to allow the micro-LED bulbs to fit and shine properly.  I also created lights for the inside ceiling of the bus which involved using round transparent nanoblocks.  In retrospect, I wish I’d added one more inside ceiling light for the front of the bus (near the driver) but that would have meant thirteen micro-LED’s.  An unlucky number? Here are several process shots of these build steps.  I also made a minor cosmetic change by increasing the height of all the seats by one brick. 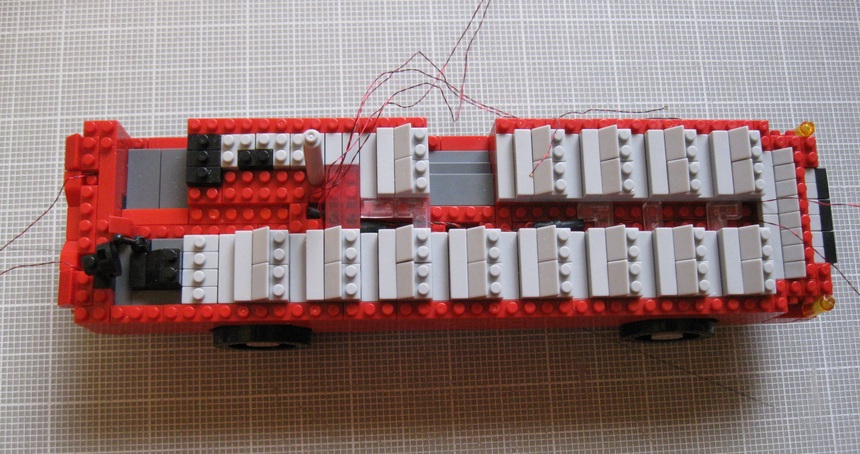 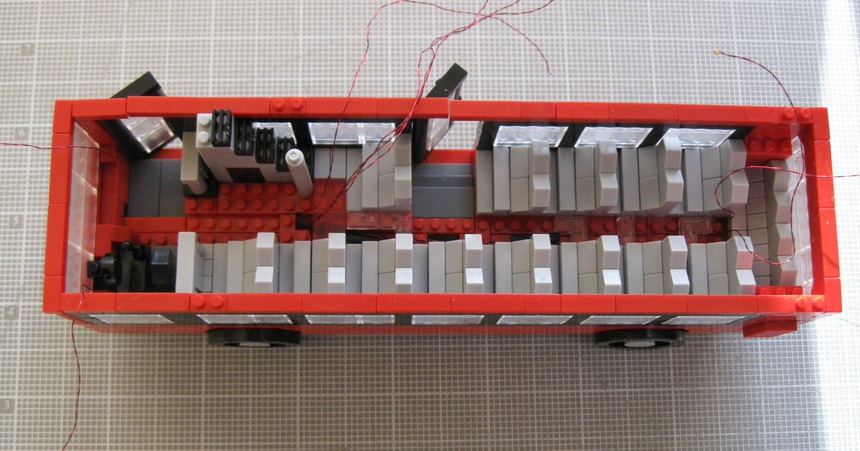 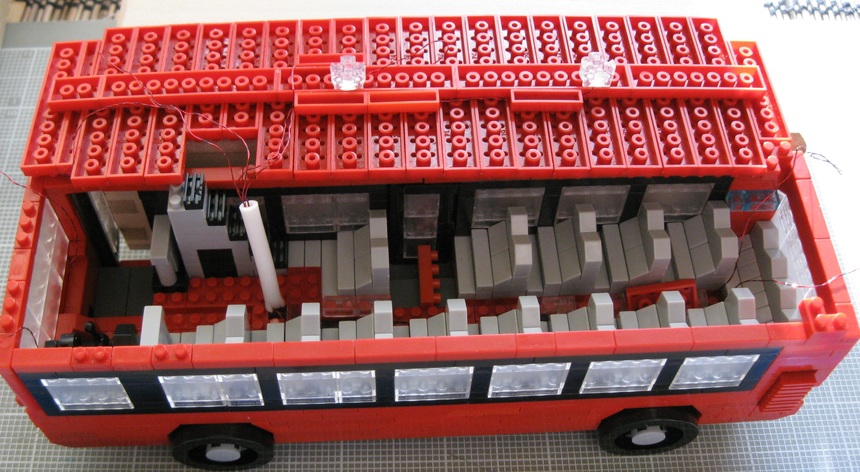 I tried various ways of controlling the mess of LED wires inside the bus—going so far as to trying a gray flexible Lego tube to channel the wires up from the opening in the floor of the bus—see photo immediately above. I could not get this technique to work. So my success in hiding the LED wires inside the bus cabin was limited. The last photo above also shows the ceiling light bricks I used.

Although a pale shadow of the elegant Lego Creator London Bus, the Balody China bus does have a few charming features, including the staircase between bus levels, the driver’s area (with special seat, steering wheel and gear shift), two functional bus doors, and even what looks to be a restroom with a black door. 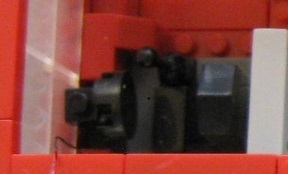 I opted to use only small portions of the supplied decals meant to cover many areas of the exterior of the bus. I hate such decals, I confess, and am terrible at applying them evenly. So, I cut out portions of the decal sheets and attached them to double-sided printer paper before gluing them with white craft glue to those areas I selected. See photos below.

I think this model came out fairly well—considering its very small size. The lighting turned out to be rather attractive. A cute model. Below are a few shots of the bus unlit, with the front/rear headlights on, with the interior/roof lights on, and with both sets of lights on. You can see my entire Google Photos gallery—including build shots--here. 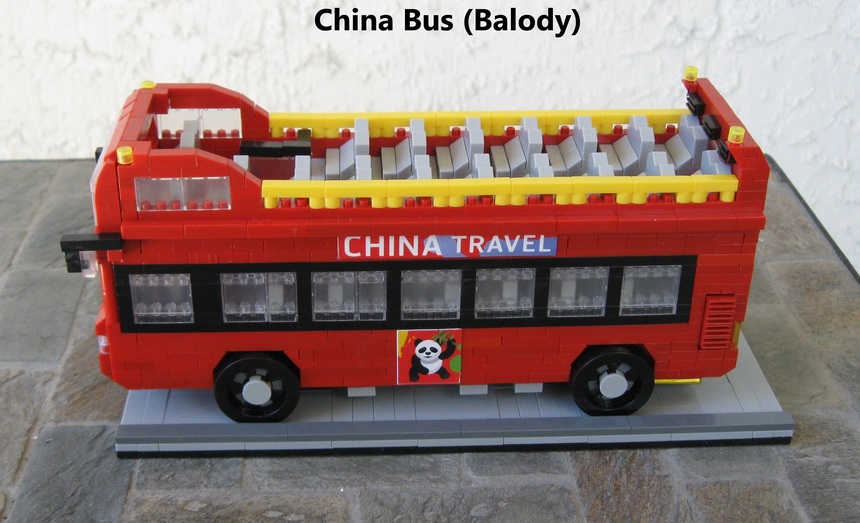 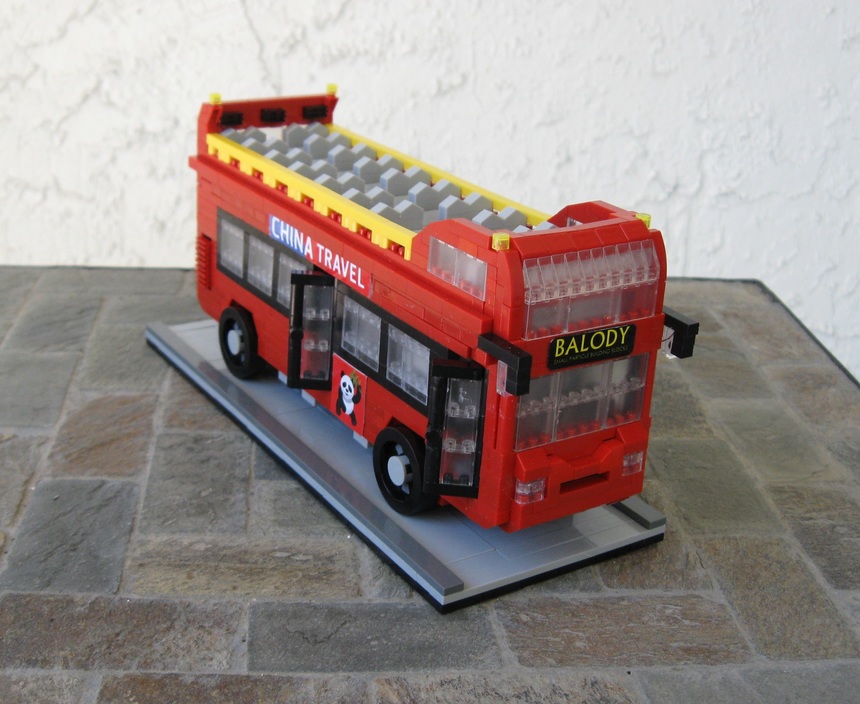 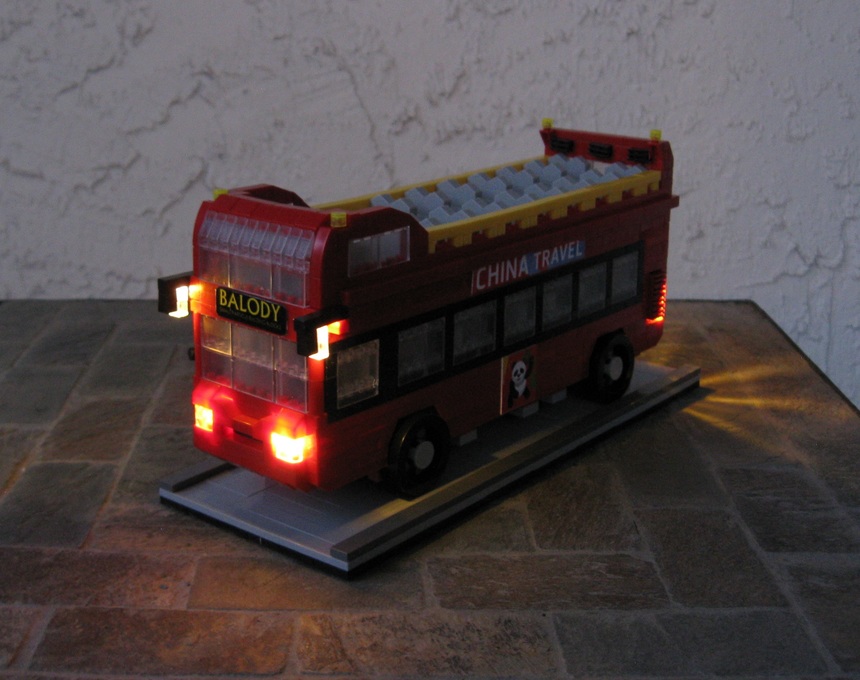 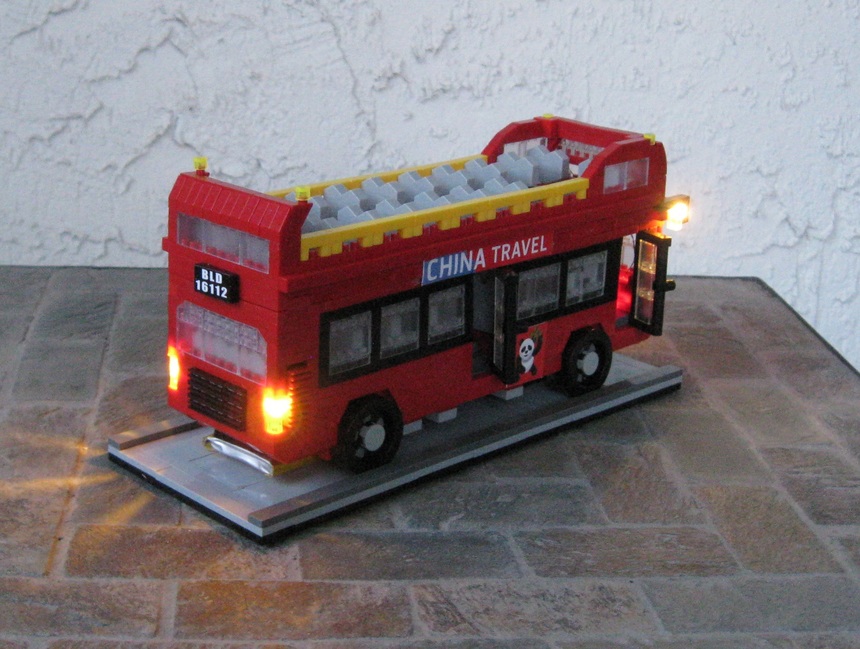 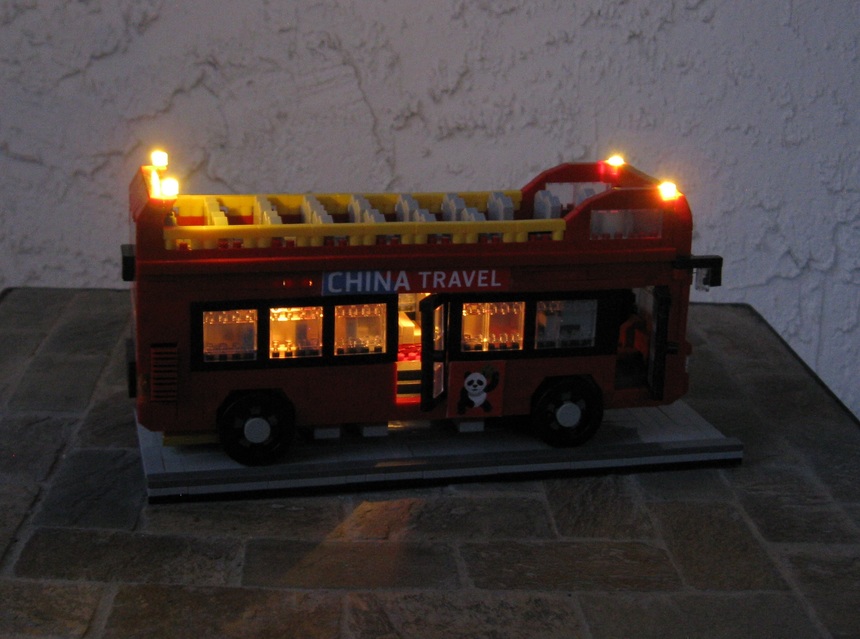 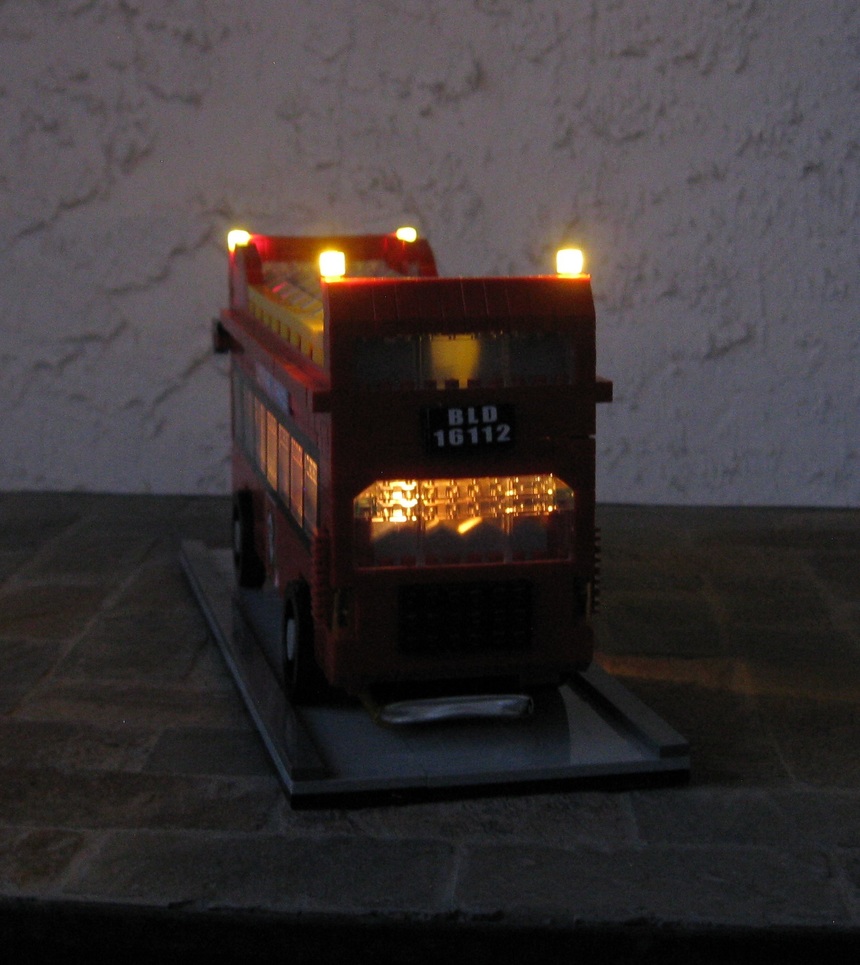 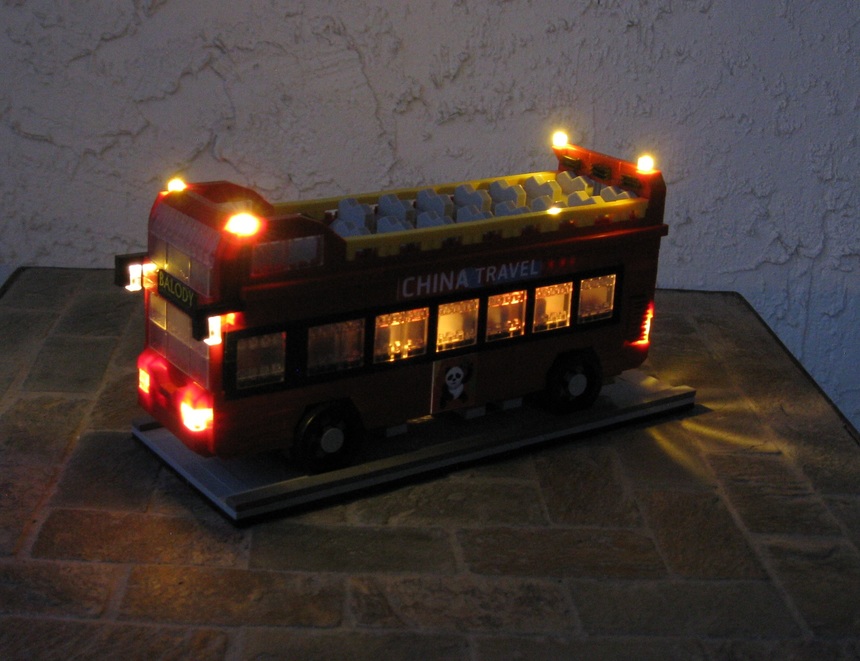 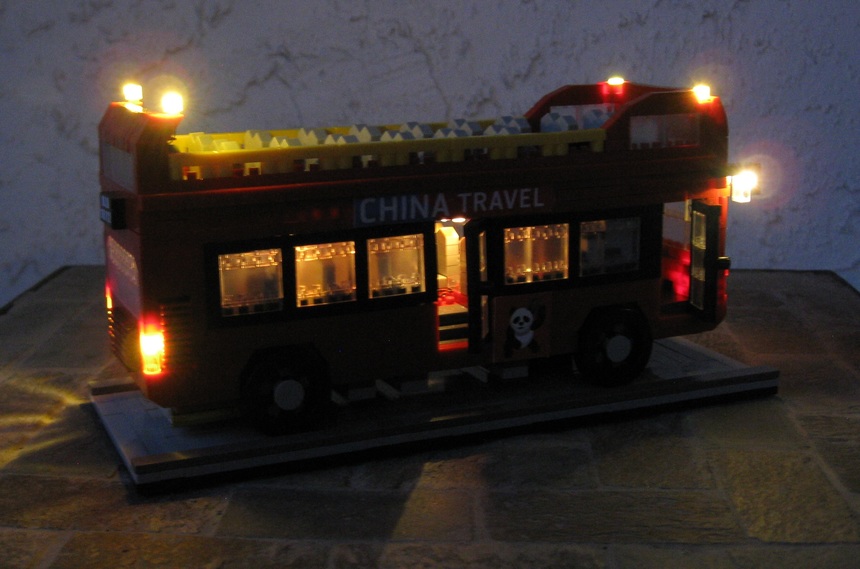 ONE VERY LARGE THANK YOU

I can only express great gratitude to Rob for his creative solutions to my lighting needs here.  The very small assembly of on/off switches, 12 micro LED lights and wires, wraps and connectors, and battery cable worked like a charm and did, in fact, fit in the small space under the bus.  The wheels do still turn and the bus can be rolled.  An additional thank you is in order.  In the middle stages of the build, I managed to somehow detach one of the LED wires from its sheath.   Rob invited me to mail him the uncompleted model.  He fixed the problem and had the bus back to me in a few days.  Quite amazing service.