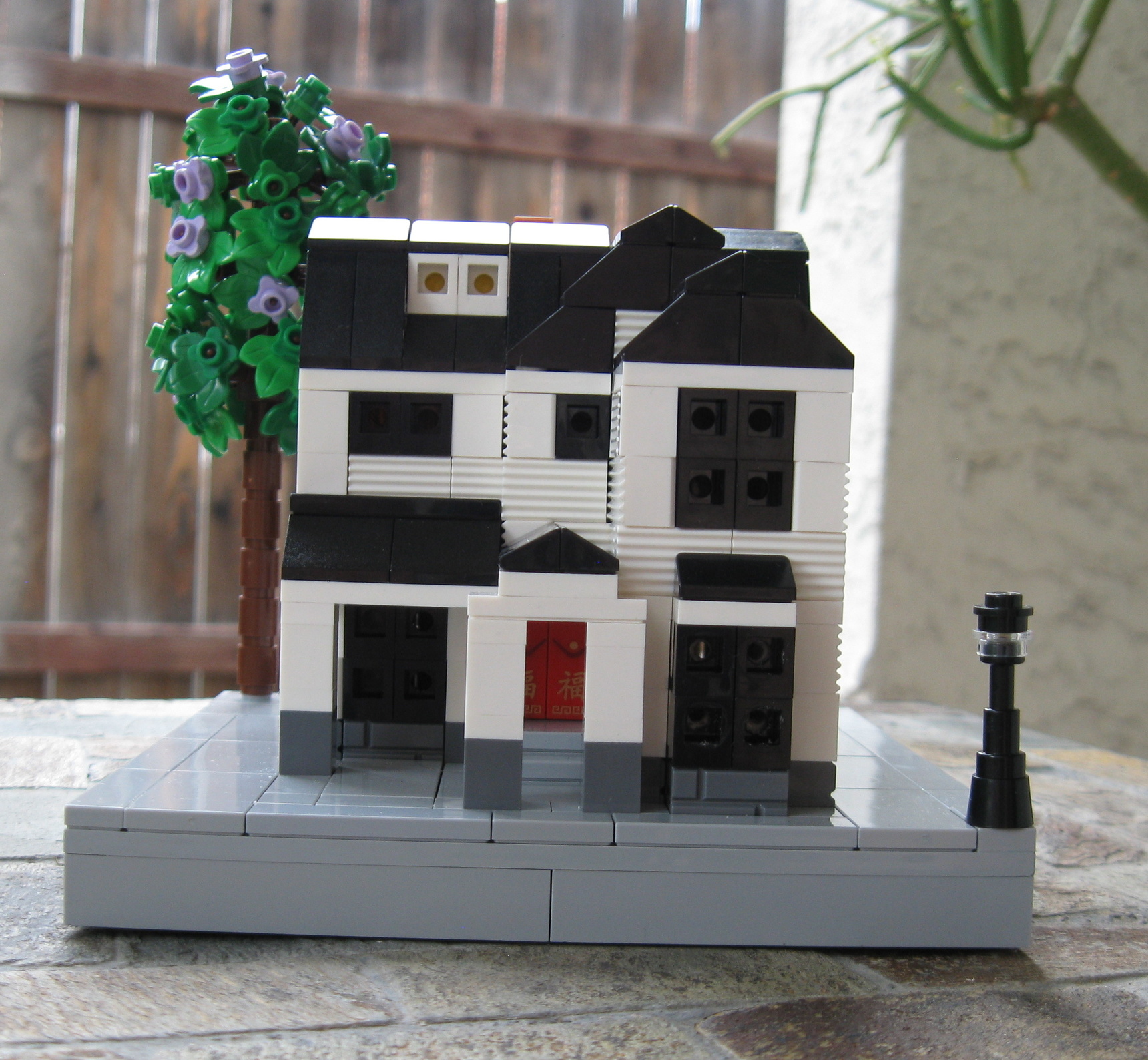 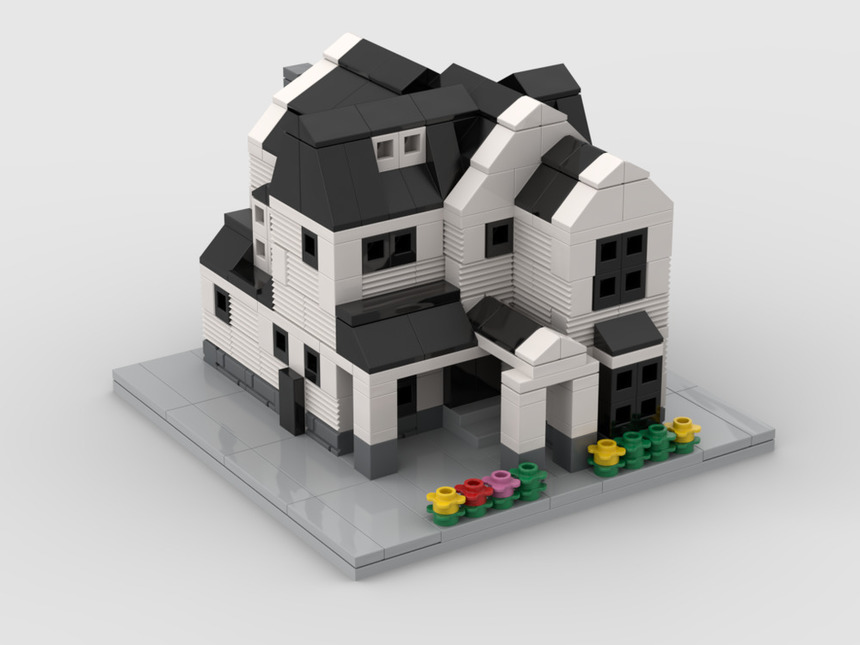 I discovered this lovely “white house” MOC by gabizon soon after finishing the Atom Brick Unity Temple. The gabizon MOC consists of 371 Lego bricks built onto a 16x16 stud base. No limitations on creativity here for customization and lighting—unlike the restrictions imposed by the LOZ-sized blocks of the Unity Temple.

Knowing I’d need some space underneath the base for wires and adapters, I added medium blue-gray bricks on all four sides to lift up the base. I also decided early on in the build that I’d be resorting more than once to a very un-Lego-like behavior—drilling holes through plates and bricks to accommodate wires into narrow spaces. Shame on me! ;-) You can see the two holes I drilled in the base for the street lamp and for light wires going up into the building. 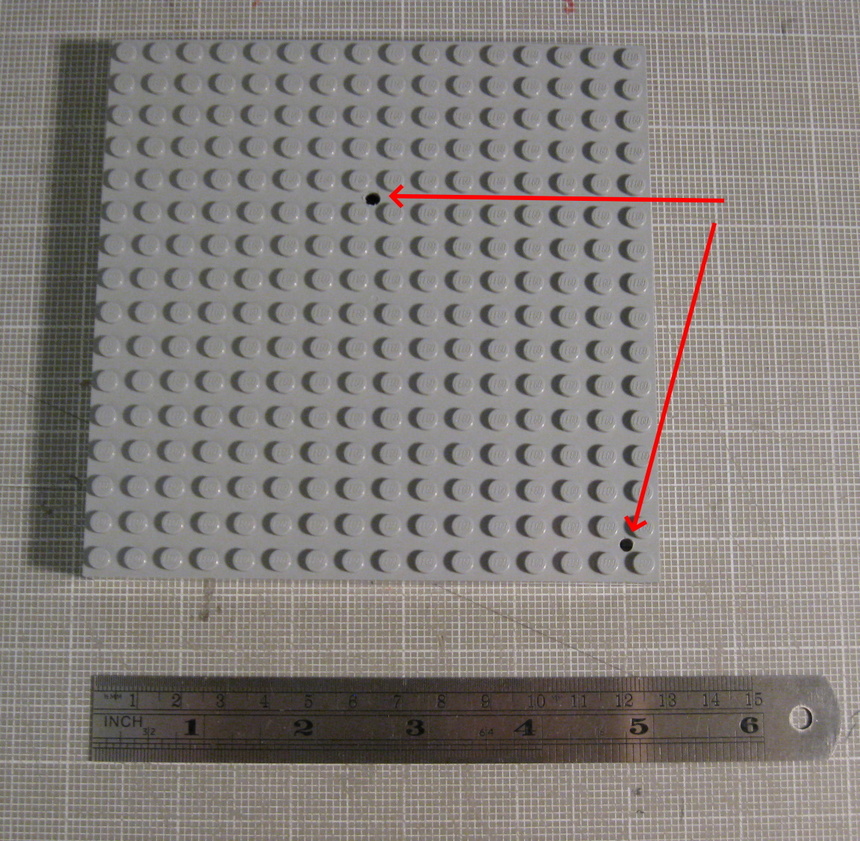 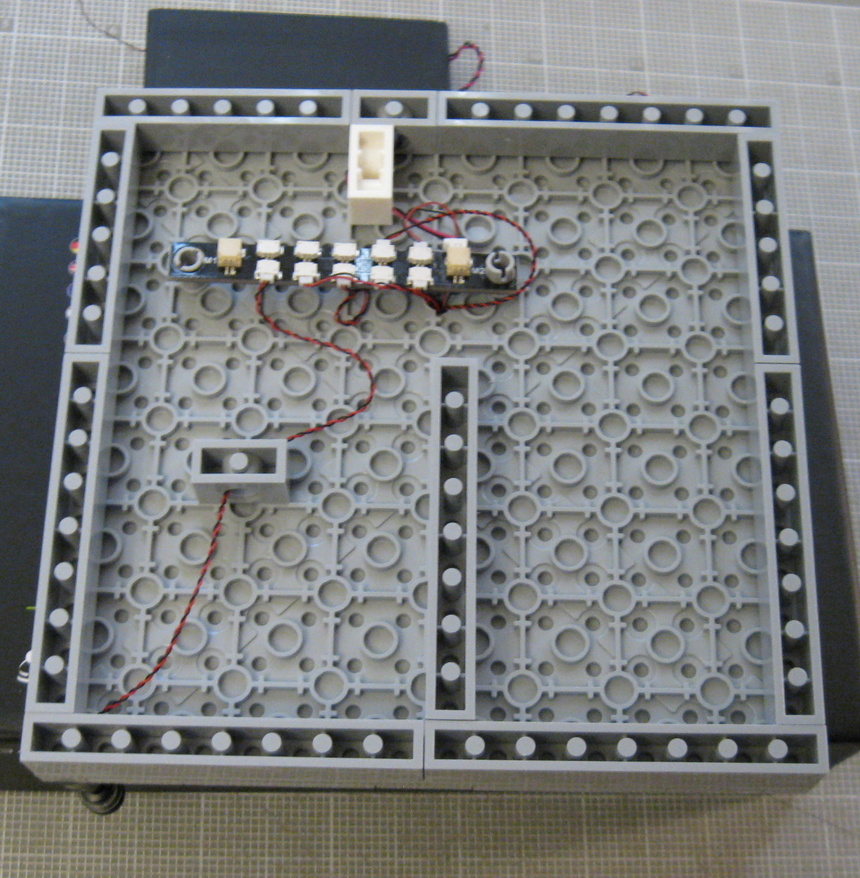 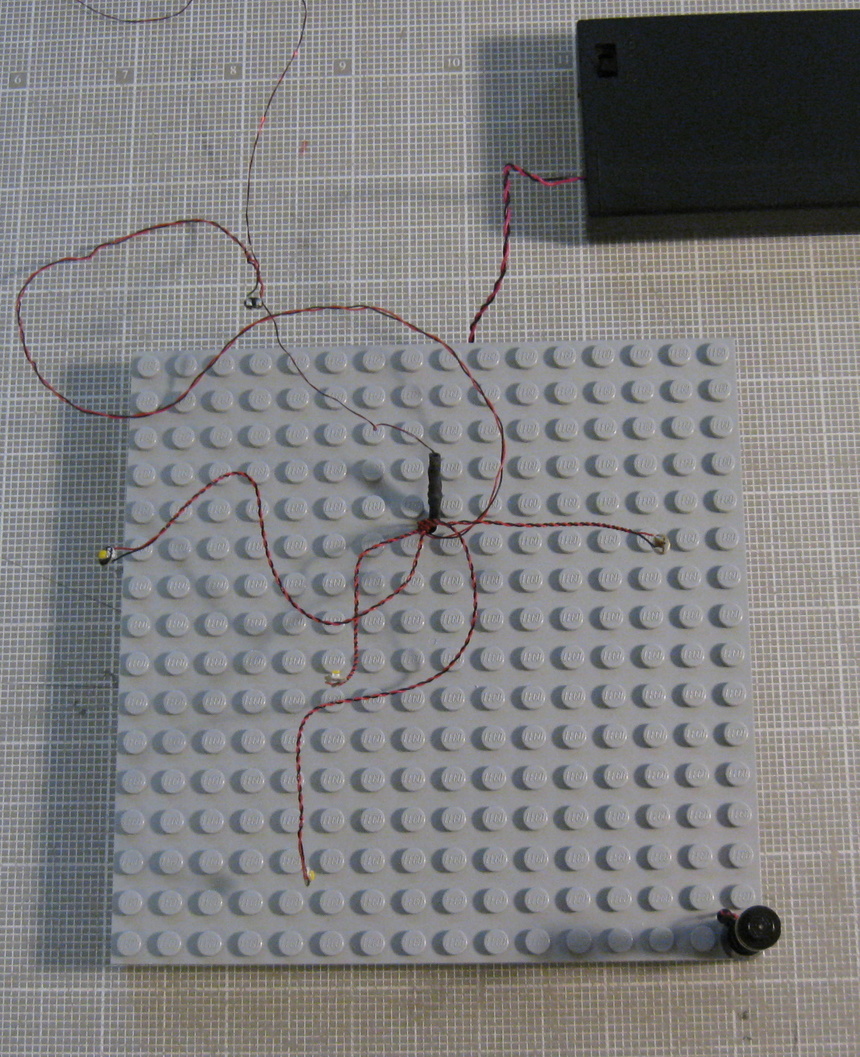 I used the following Brickstuff supplies: 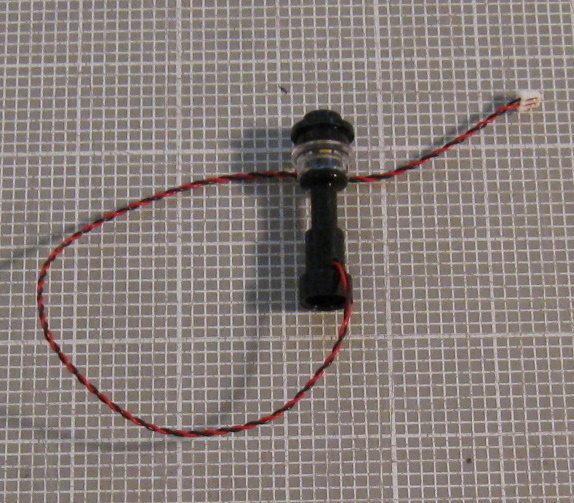 It quickly became apparent that lots of shielding (with other Lego bricks and tiles) would be needed to reduce greatly the amount of light leaking out between bricks in the four walls. I discovered that the white 1x2 special bricks (#2877) used more than 75 times in this model allow more light through them than do standard 1x2 and 1x1 white bricks. Another reason to reduce light leakage stemmed from gabizon’s choice to use #4070 “headlight” special bricks for windows. These “headlight” bricks have no “glass” and allow lots of light through their center openings. 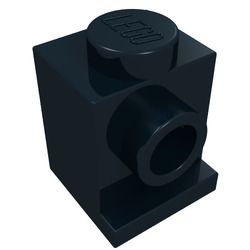 Here is a photo of the set-up on the first floor with red arrows showing where LED lights are placed and shielded. This image of the first floor also shows the two spots where I drilled holes to allow light through sets of tiles attached inside the upper right and lower right “headlight” bricks. 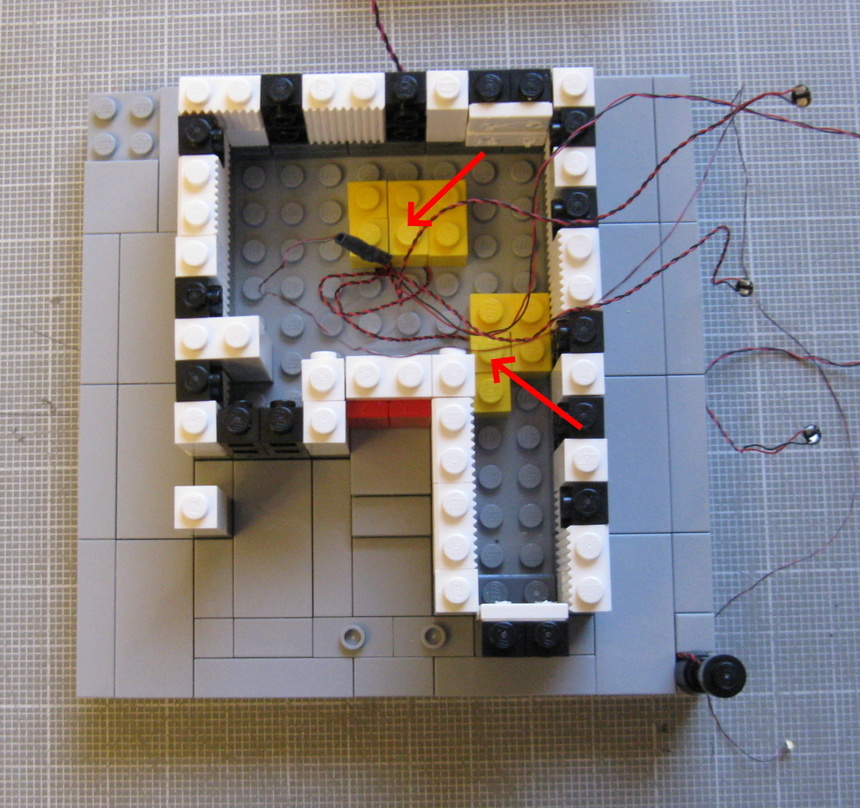 The second floor is divided into front and rear rooms. I placed two lights in the front room and one in the rear. I used yellow bricks and tiles to shield the lights and had to add dark blue-gray bricks to further block out the intense LED light. Red arrows mark the locations of the LED lights. 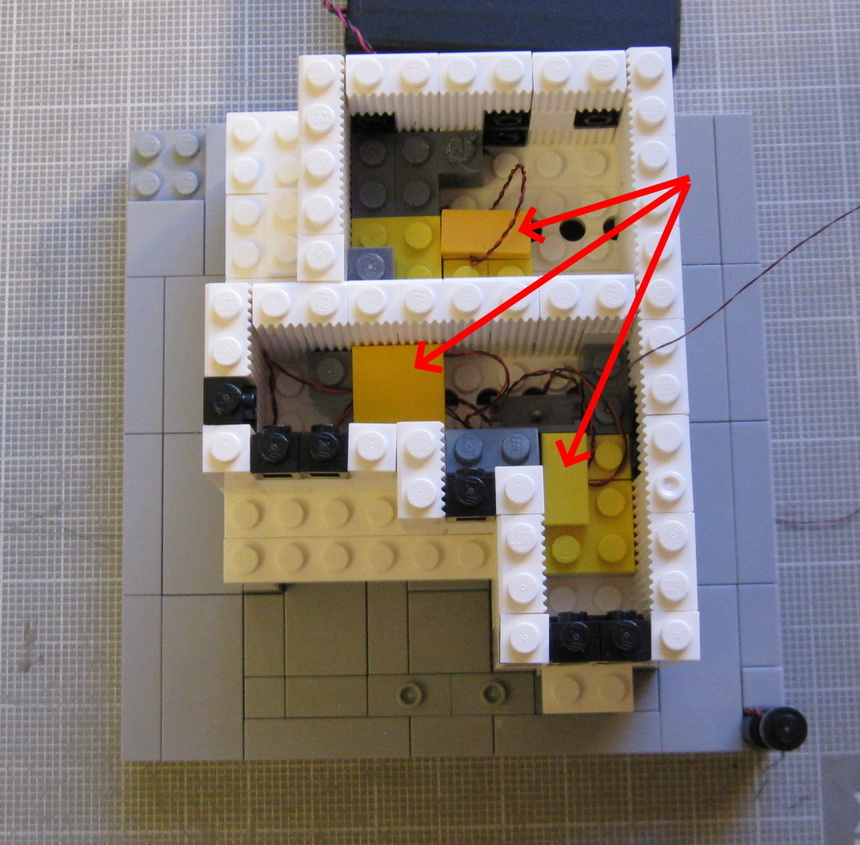 The left hand side of the second floor includes another set of windows which sit in front of a wall of #2877 special bricks. 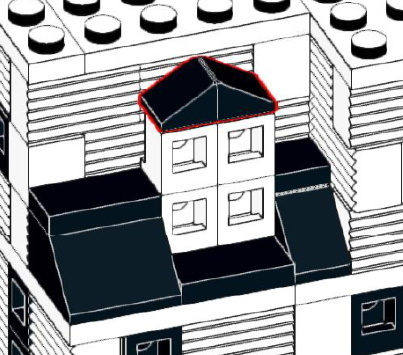 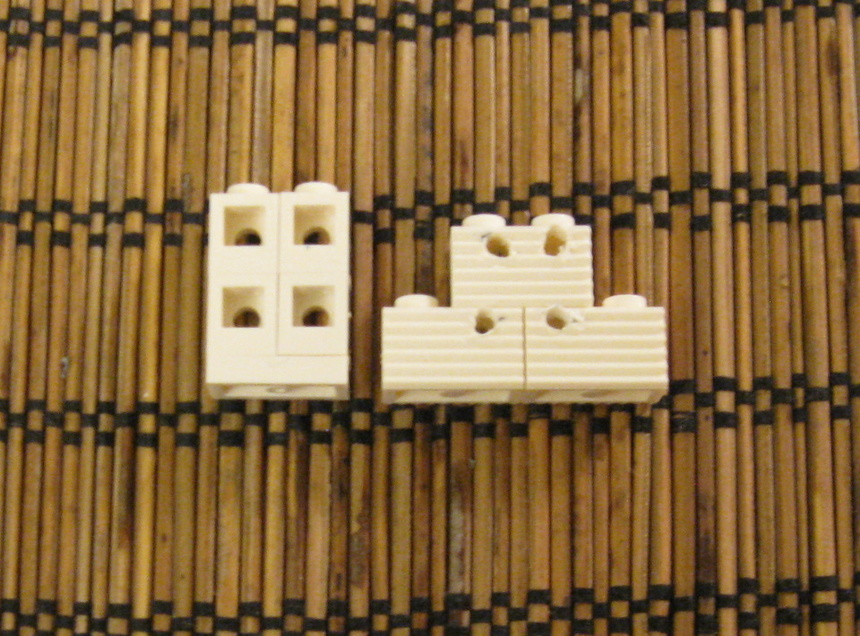 The second floor roof includes one Technic plate for the final light for the third level. The red arrow marks the spot where the mini-LED light wire and bulb is sandwiched between two black #60481 slope bricks. 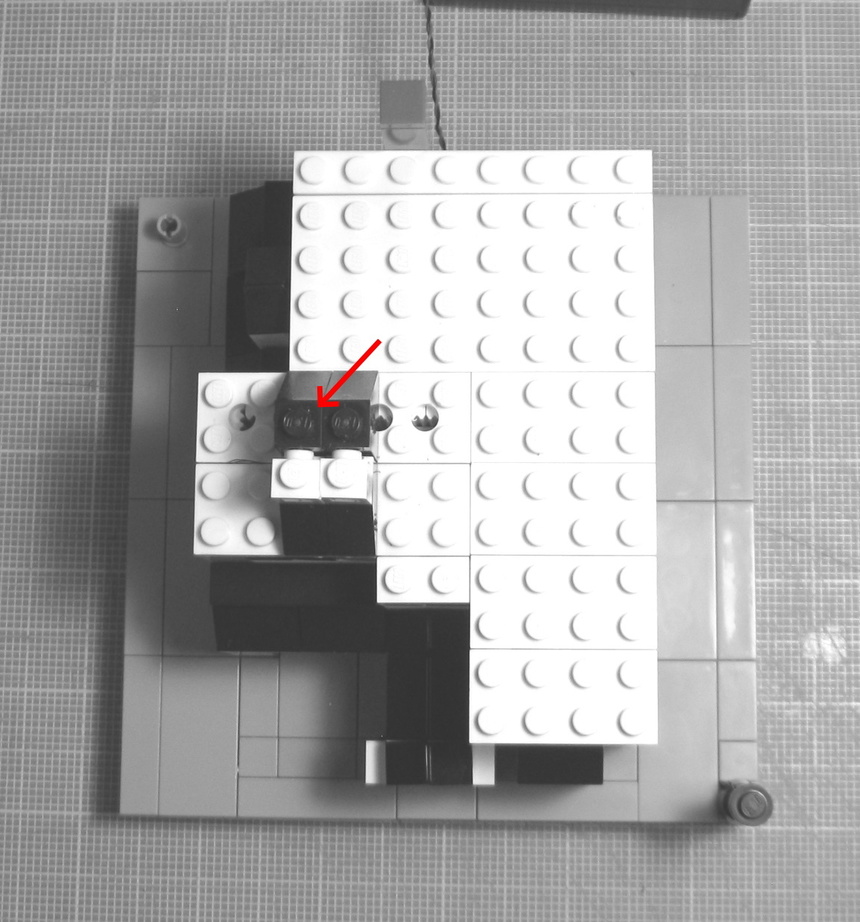 There is no actual third floor but rather a section of the black roof with windows. This illustration from the assembly instructions and the photograph above show where these windows sit and where the last LED light must be squeezed in. 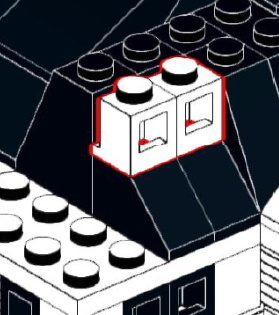 I had to use the drill once again to create holes through the sides of these black #60481 slopes and through their fronts, as well, behind the white #4070 headlight bricks. The idea was for the mini-LED light to shine out through the two white headlights (that is, through the third floor windows). This detail photograph shows the drilled holes. 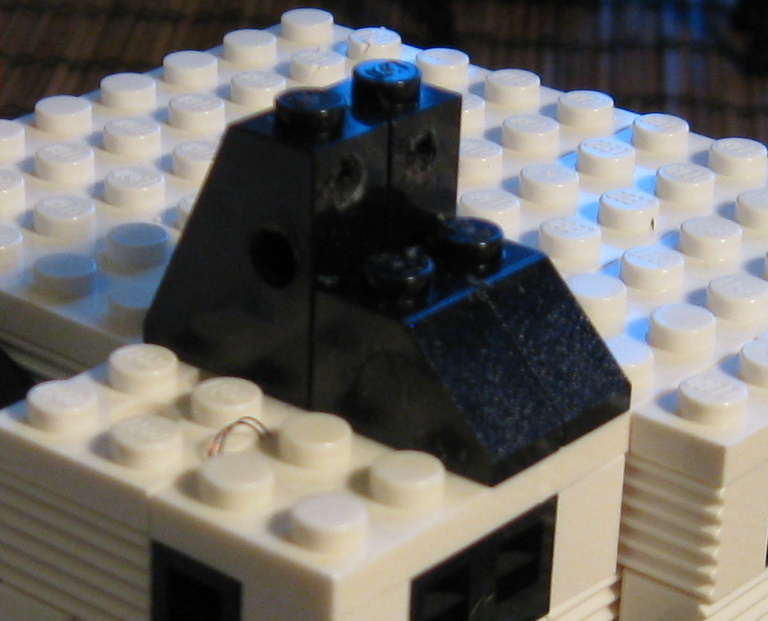 This took quite a lot of maneuvering to get the mini-LED to sit in just the right spot between the black slope bricks.

I eliminated the minimal floral area in the front of the original model and hunted for something more impressive. I found a wonderful tree in this Plaza MOC by rvn0516 and placed it on the rear left side of the base behind the house—fastening it in place with a LEGO 2x2 tile with vertical pin (#2460 / #49153).

As I indicated above, I used one Brickstuff black mini-street light in the front right corner of the base. I added one round brick under the light to increase its height. 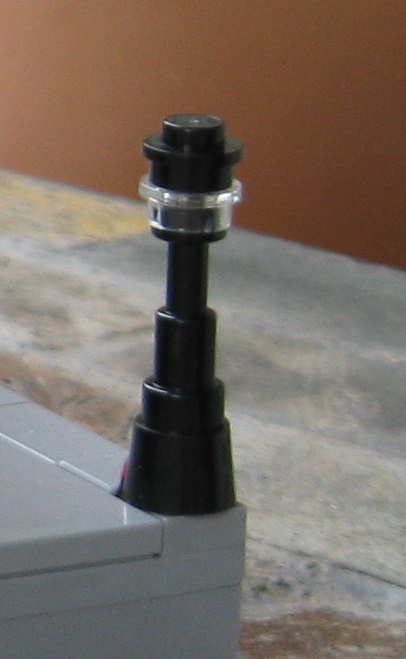 For some reason, I wanted a Chinese/Japanese touch to this lovely MOC. That was accomplished by using the following special 1x2 tiles as substitutes for the front and left side doors.

I wanted more color in the chimney. So, I substituted dark orange for the dark gray bricks and tiles used to create the chimney. I also added more of the bricks to make the chimney taller to stand out over the roof line.

I made some minor changes in the color of some roof pieces going from white to black. This looked better to me.

All this work with drills and shielding of LED lights with bricks and tiles did produce some nice results. Here are several shots of the MOC both unlit and lit. You’ll have to decide if my customization “mania” went too far. You can see more images at my Google Photo gallery here. 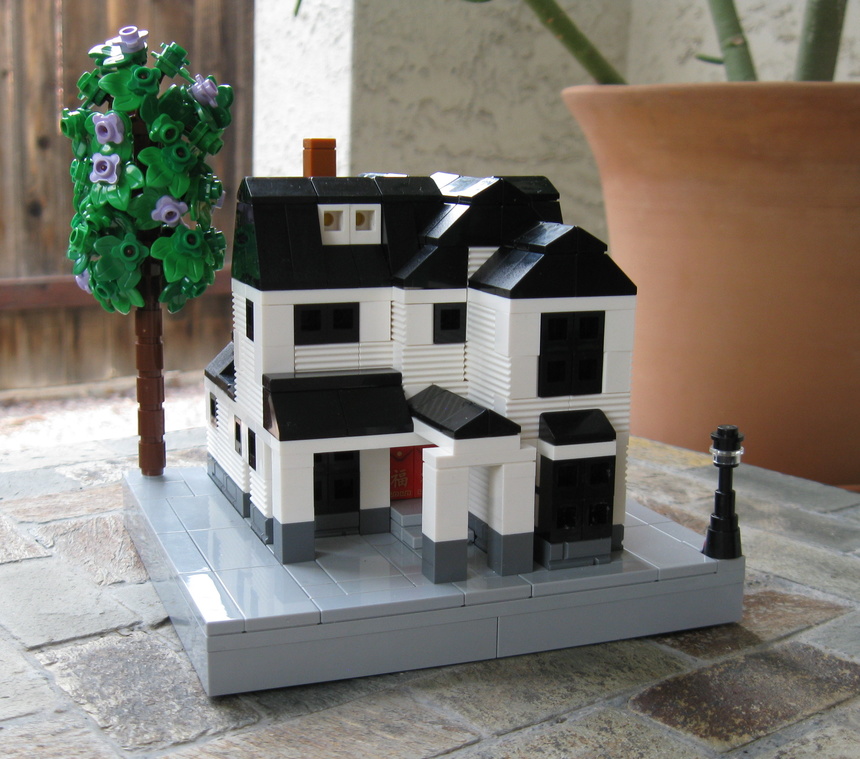 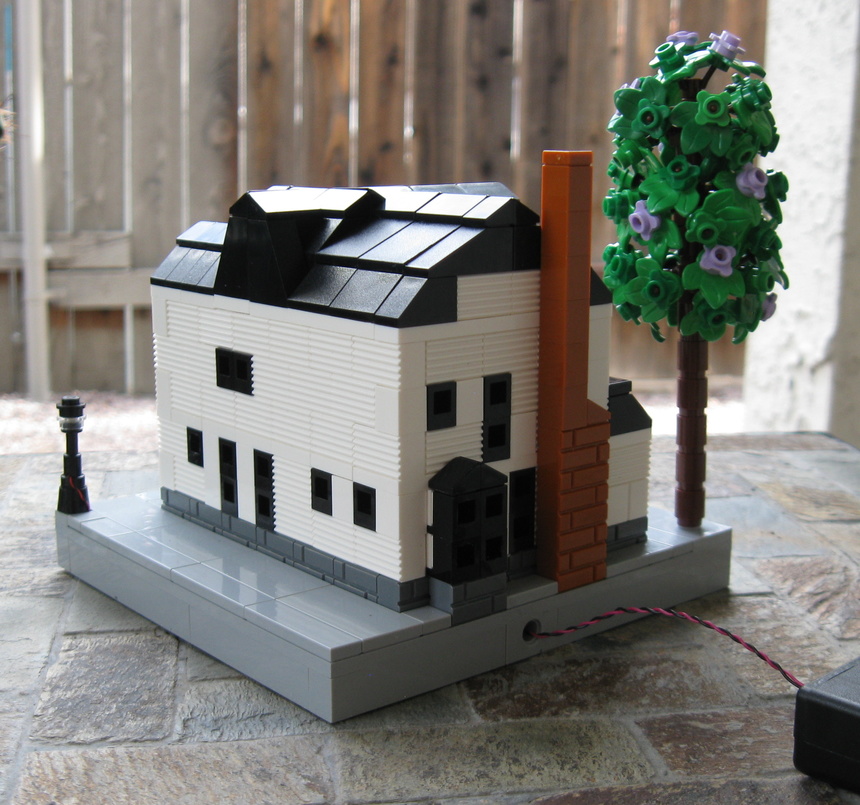 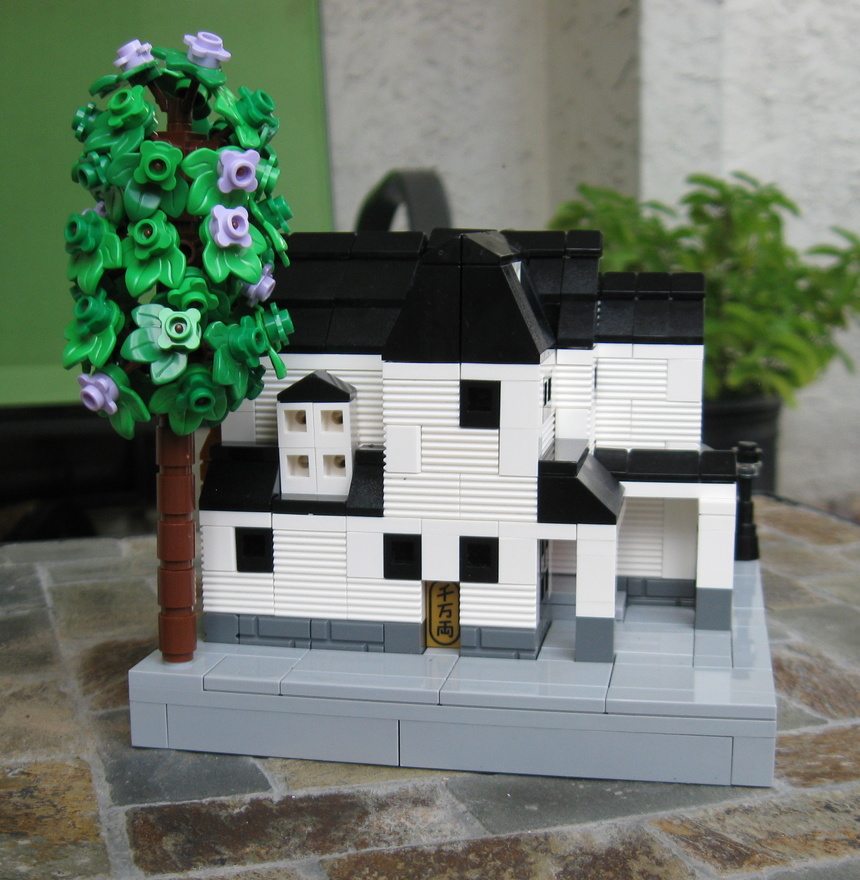 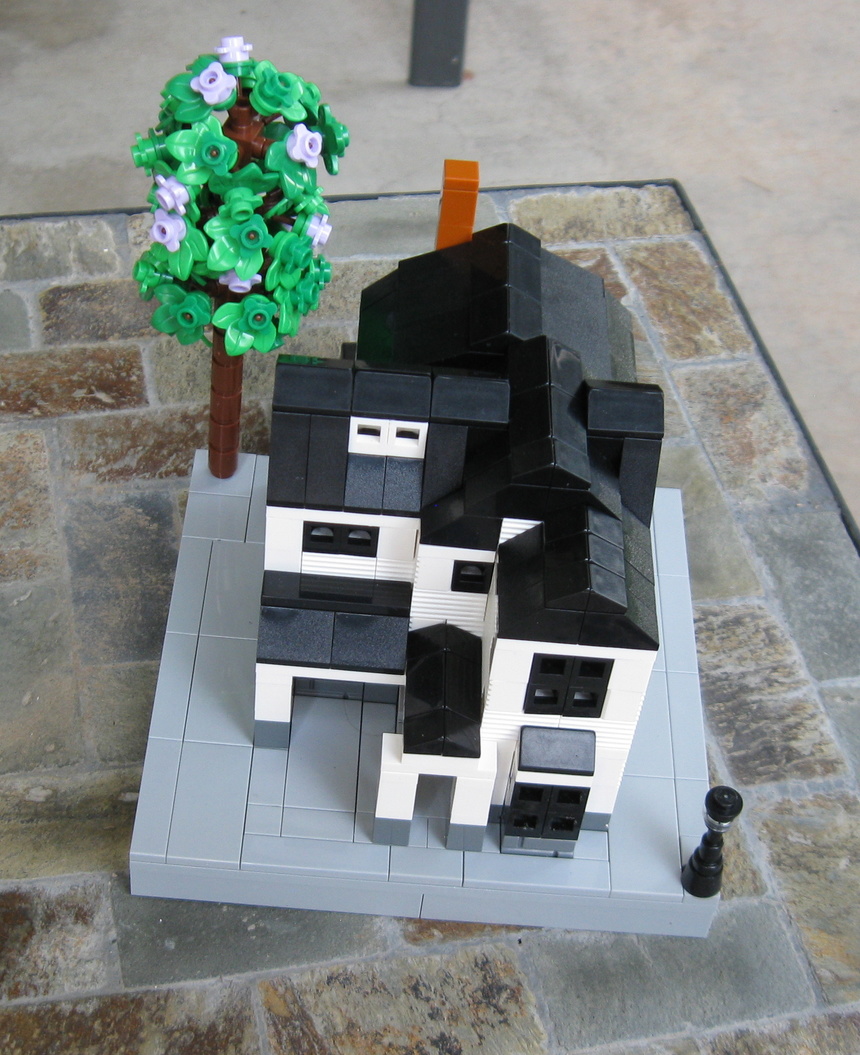 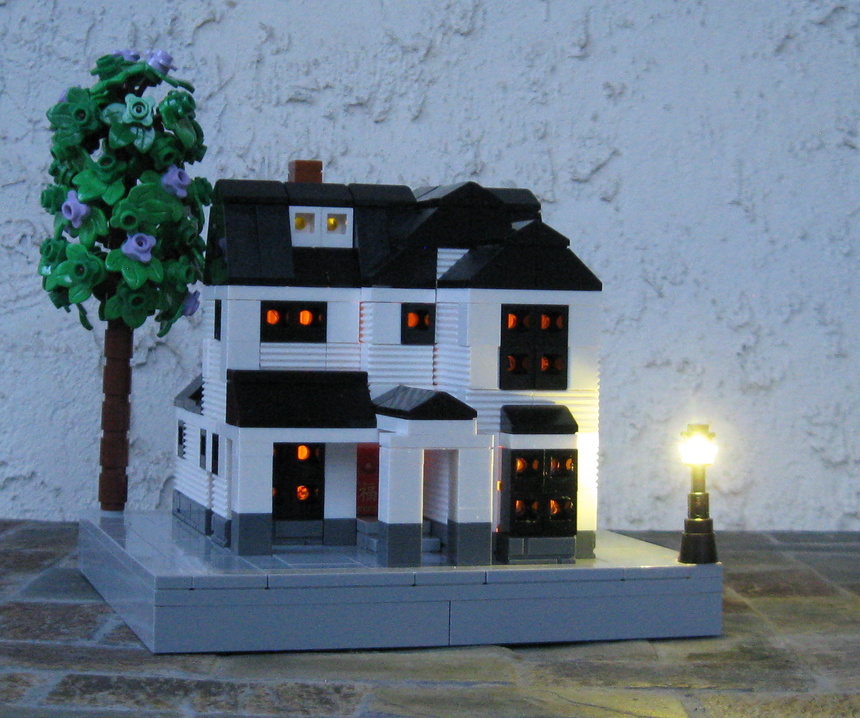 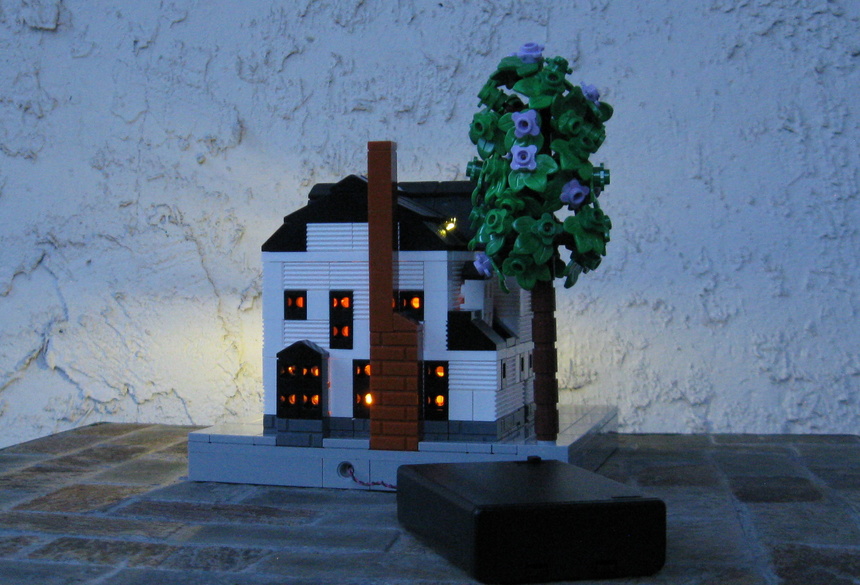 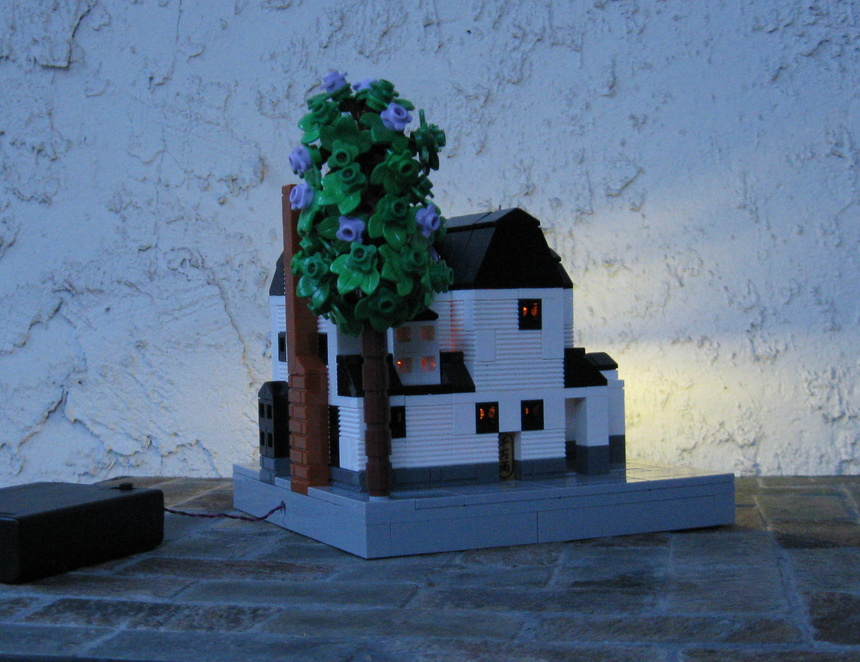 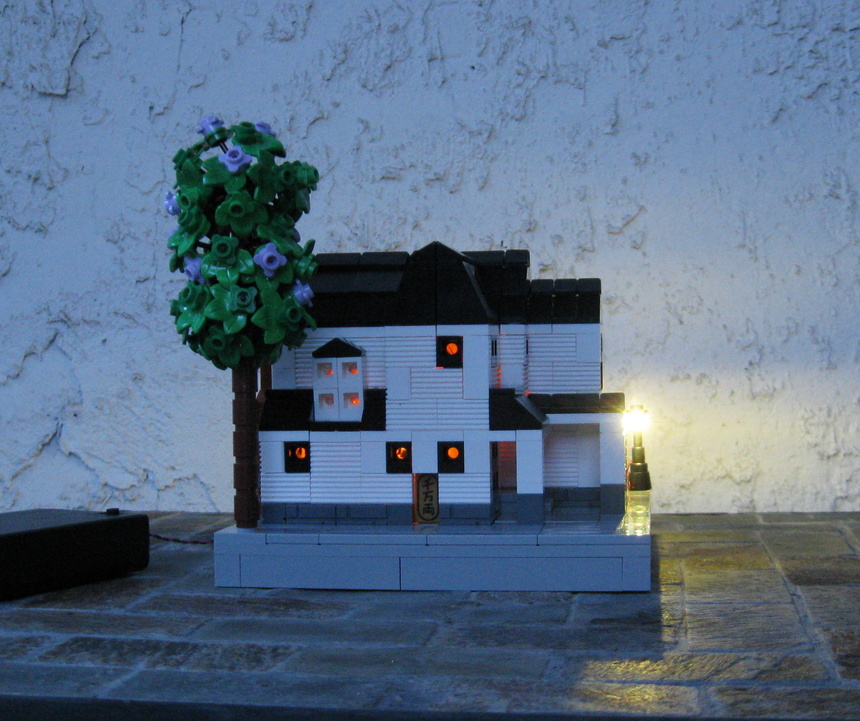